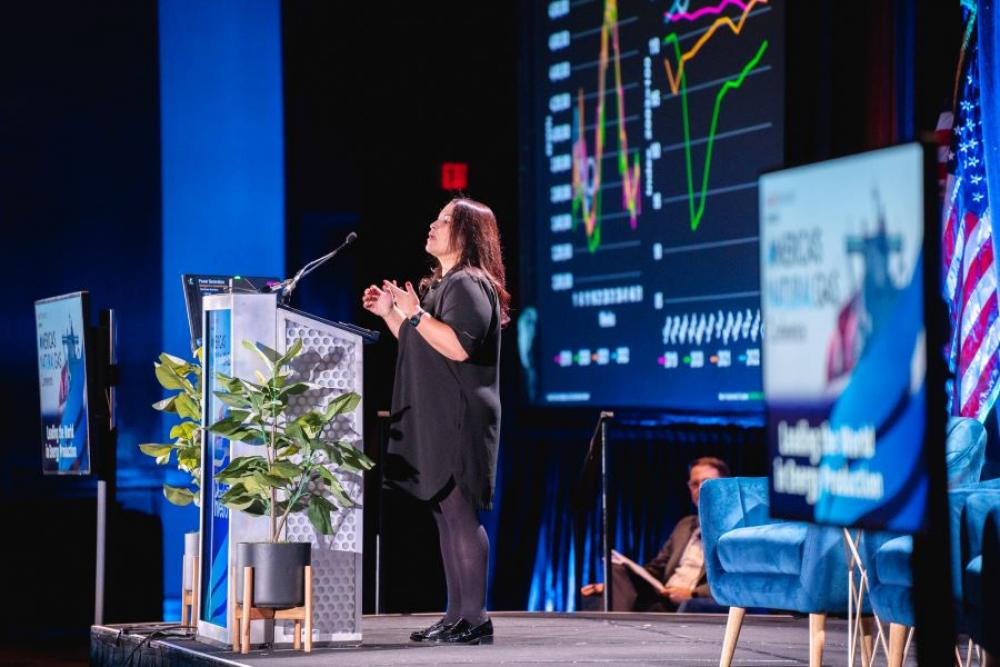 HOUSTON—The share of renewables, particularly solar, in the power generation mix is growing, but natural gas will remain a key component of the stack as power demand rises, according to a power and renewable energy expert.

Even with adjustments for the pandemic, weather, supply chain constraints and higher fed rates, demand for power is rising—up 10% for ERCOT alone, Bernadette Johnson, general manager and head of power and renewable for Enverus, said during Hart Energy’s Americas Natural Gas Conference on Sept. 27. Renewables, however, are rising to meet the challenge as hydrocarbon and nuclear generation remains relatively flat.

“This is a renewables story,” she said. “Natural gas [is] tracking pretty closely with previous years, coal-fired generation, a little bit lower; call it middle range, and then wind and solar [are] tracking above. Wind and solar continue to grow, specifically solar. Solar is now far outpacing wind in terms of additional capacity added [and] utilization.”

Natural gas-fired generation continues to dominate as plants move away from coal; however, natural gas demand for power generation is not growing at the same pace as it did in the past, Johnson said, despite this summer’s warm temperatures.

“It’s not perfect news for natural gas, but it’s not terrible news. Natural gas is still hanging in there pretty well in the overall power generation stack,” Johnson said before turning to renewable generation.

Data show solar and wind generation trending higher than 2021. The trend is expected to continue, with incentives in the recently passed Inflation Reduction Act potentially giving it another boost.

Unless renewables become more predictable, the outlook is not likely to change, given its need for massive battery capacity. There will be scientific breakthroughs in areas such as battery chemistry, she added, but one can’t time such breakthroughs along with any policy changes that could impact power generation.

Natural gas comprised 38% of the generation mix in 2021, while coal represented 22% and nuclear, 19%. Renewables, including solar, wind and hydrogen, were at about 19%.

Those percentages are expected to change as more newbuilds come online. Solar projects outnumber the rest.

“Solar has really picked up and taken over as the primary project capacity we’re seeing; whereas, five to seven years ago, it was wind.” The sector is also seeing more power storage facilities for batteries in the works.

California looks different with almost no generation from coal. Here, natural gas makes up about half of the generation mix with solar at about 21%; wind, 11%; nuclear, 10%; hydro, 7%

Solar is plentiful midday but when the sun goes down and everyone leaves work, peak power takes off. “The natural gas power plants have to wake up very quickly, and it puts a lot of stress on the grid,” Johnson said, adding she believes natural gas demand for power generation isn’t likely to fall further given challenges with renewables and reliance on battery storage.

“It’s the biggest in the world. That would power ERCOT for about 40 seconds on an 80,000 megawatt peak summer day,” she said, noting 4,000 MW of those would be needed to cover two days.

When scaling up, the scope of the problem becomes visible.

“These batteries are not like a silver bullet that’s going to solve all these challenges and push natural gas down and increase renewables dramatically,” Johnson said.

She’s not bullish on hydrogen either, considering the massive infrastructure buildout it requires among other concerns.

“Gas demand will look different in the power sector. … But gas isn’t going anywhere,” Johnson said. “Renewables are growing as a percentage of the gen mix, but they remain intermittent. They must be backstopped by dispatchable and flexible resources, which is natural gas.”