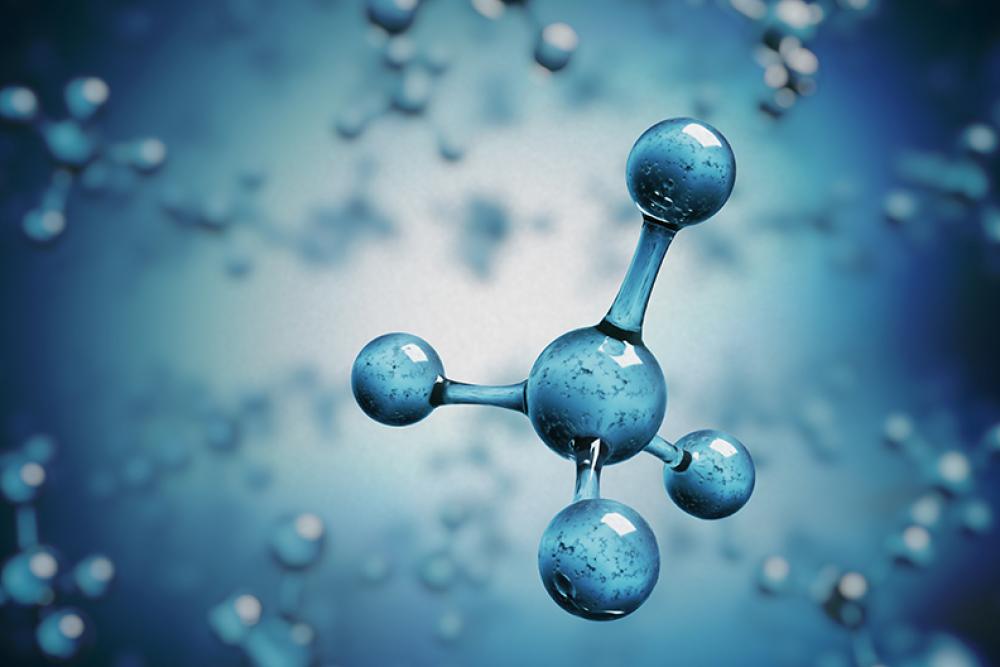 A rendering of a methane molecule (Source: Shutterstock.com)

A coalition of natural gas companies, including E&Ps, midstream and downstream operators, far exceeded its target for reducing methane emissions eight years ahead of schedule.

In November, Our Nation’s Energy Future (ONE Future), an alliance of 16 companies, reported its 2017 methane intensity—the ratio of net emissions to throughput volumes—was 0.55%, surpassing its initial goal to reduce emissions to 1% by 2025. In 2012, the overall natural gas industry’s methane intensity was 1.44%.

The One Future companies collectively account for 10% of U.S. natural gas production, 32% of gas transmission miles and 9% of distribution. Other companies, including oil and gas majors, have entered similar groups in order to increase profitability and to demonstrate their stewardship of the environment.

“Today’s report validates that through targeted investment in abatement technologies, we can significantly reduce methane emissions across the natural gas supply chain,” said One Future Executive Director Richard Hyde. “We are demonstrating that natural gas can indeed meet the growing energy needs of our country in a sustainable manner, and as our coalition continues to grow, we look forward to helping new members across the country achieve their methane reduction goals.” 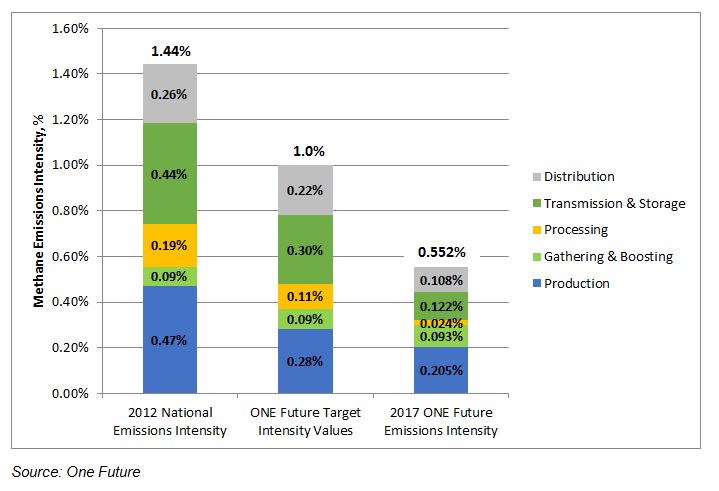 One Future’s protocols were developed in partnership with the U.S. Department of Energy and its results were independently reviewed by the National Energy Technology Laboratory and by Innovative Environmental studies.

Southwestern Energy’s focus on natural gas emissions led it in September to sell gas to New Jersey Natural Gas, a distribution company serving over half a million customers throughout New Jersey. Southwestern adopted One Future’s methane leak/loss rate goal of 0.36% of gross production by 2025 and surpassed it, with a 0.19% methane intensity, the company said.

One Future companies have invested in reducing emissions since 2014, upgrading and replacing pipeline infrastructure as well as actively seeking and repairing system leaks. The organization also worked out EPA-approved reporting protocols to demonstrate “credible and measurable results,” One Future said in a press release.

Other industry-led groups, such as API’s The Environmental Partnership, and a voluntary, CEO-led organization, the Oil and Gas Climate Initiative (OGCI), have pledged to reduce emissions.

The OGCI members represent about 30% of global oil and gas production. Royal Dutch Shell Plc, an OGCI member, has targeted methane emissions intensity below 0.2% by 2025. The target covers all oil and gas assets for which Shell is the operator.

“I trust as an industry we recognize that the drive to reduce greenhouse gas emissions has both social and material value,” Watkins said.

The company has phased out greenhouse intensive technology, such as high-bleed pneumatically operated controllers and is also using solar energy to power its well pads.

Two of One Future’s members joined in fourth-quarter 2018 and their data is not reflected in One Future’s November report.