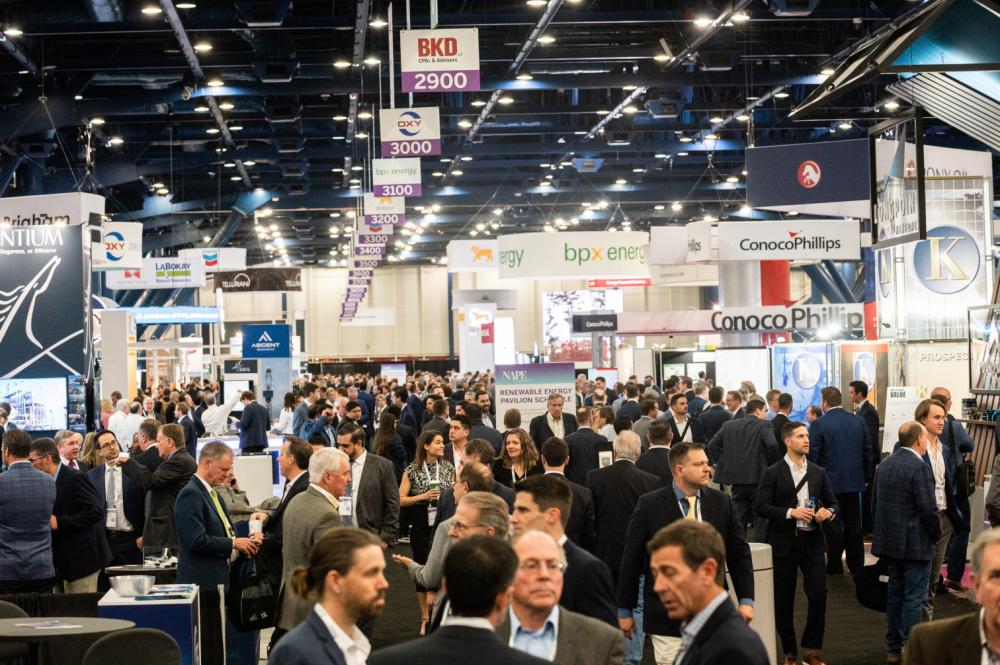 After being derailed by COVID-19 in 2021, NAPE Summit returned with over 400 exhibiting companies, 300 prospects and millions of acres registered. (Source: NAPE Summit)

This year’s event, held Feb. 10-11 at the George R. Brown convention center in downtown Houston, included roughly 400 exhibiting companies with more than millions of registered acres for sale plus tech companies and even a Renewable Energy Pavilion all buzzing with excitement not seen at the annual expo in several years, which most attributed to $90 oil.

“I would compare it to this time last year, we were cautiously optimistic as things were improving … it’s picked up a lot in terms of transaction volume that we see with our customers,” Nick Vandivere, CEO of ThoughtTrace, told Hart Energy on the NAPE show floor on Feb. 10.

“I think the malaise that’s been over oil and gas for almost a couple of years now has largely subsided,” he said.

Even before the COVID-19 pandemic derailed the conference in 2021, the NAPE expo, launched in 1993 as the premier marketplace for the buying, selling and trading of prospects and producing properties, had faced several turbulent years thanks in part to the nature of the commodity markets and also a changing environment for dealmakers as more and more embrace technology.

Still, even in today’s world where companies can quickly move so many deals digitally, Douglas H. Hunt, director of acquisitions at Petro-Hunt LLC, said there’s no replacement for face-to-face.

“The key benefit for NAPE that I see is the networking,” Hunt told Hart Energy in between talking to show attendees at Petro-Hunt’s booth on the NAPE exhibition floor.

Based in Dallas, Petro-Hunt is a privately held independent oil and gas company owned and operated by the William Herbert Hunt family. Today, the company, which is a top 10 private liquids produce in the U.S., is running a steady one-rig operated program in the company’s primary position area of the Williston Basin.

Hunt, who has been to most NAPE Summits, said traffic at this year’s show has been better than he expected because it has been more similar to NAPE in the past.

“One of my concerns and frankly, we have a lighter crew here partly because of that, is how useful will NAPE be if people don’t show up. … I can go back and tell people honestly I think NAPE has still got legs,” he said.

A regular at both NAPE Summit and Summer NAPE, Jay Cooper, vice president of land at Three Crown Petroleum LLC, also told Hart Energy she was noticing a lot of new faces at this year’s event.

“Whether it’s the renewables pavilion or something else that’s bringing more people from even the oil and gas industry, it’s been interesting to see some younger people [and] some newer faces,” Cooper said from Three Crown Petroleum’s booth.

“Honestly, it’s great all-around to have that diversity,” she added.

Focused mostly in the Rockies and Wyoming specifically, Three Crown Petroleum, a private oil and gas exploration and exploitation company founded in 2005 by H. Howard Cooper, were featuring a mineral package and a bunch of lease packages at this year’s NAPE.

Cooper described the company, based Steamboat Springs, Colo., as working in a lot of places that were on the frontiers of certain plays. Still, she said at NAPE that she felt Three Crown had been moving things a lot quicker right now and people seemed a little more willing to take a chance.

“We have some really exciting prospects that we pulled together,” she said. “We worked really hard through COVID to put together some really good quality stuff and now people are actually out there having a little more freedom with their pocketbooks.”

Gillick, who had flown from New York to attend NAPE, admitted in an interview with Hart Energy following the event that he didn’t make it to the show floor this year because he had spent so much time seeing clients.

“There were so many people back in Houston, it just felt really good,” he said. “I’m sure $90 crude had something to do with it but it was just a generally positive environment.”

“Clients were excited to see us. It was a really upbeat atmosphere,” he added.

The firm outlook is that oil prices will remain robust through the year, according to Gillick, who added that he tends to agree with that outlook and so does the industry.

“The outlook, and especially for North American industries, is very positive,” he said. “Balance sheets are getting very healthy and there’s tons of cash so really the only question will be what do companies do with that cash as we go forward?”

Still, the brighter oil market outlook hasn’t dimmed the energy transition push—even at NAPE, which featured spaces dedicated to opportunities tied to the transition such as the Renewable Energy Pavilion.

On the energy transition front, the Enverus team heard a lot about carbon capture at the event, according to Heather Leahey, a senior associate at Enverus who primarily covers the carbon capture space for the firm.

From what Leahey saw, several operators featured their carbon management plans at this year’s NAPE, including Occidental Petroleum.

“[Carbon management] seems to be on operators’ minds,” she told Hart Energy.

Still, the industry’s expansion into carbon capture isn’t right for every E&P company—at least not yet, she said.

“There’s a lot of risk involved right now especially since it takes a lot of capital to afford for this type of thing,” she explained. “There’s a lot of policy risk, regulatory risk, technical risk as well. Those supermajors and large caps can stomach that a little bit better as opposed to some of the smaller companies.”

One of the companies taking that leap is Ozona Carbon Capture & Sequestration, a team of in-house environmentalists, engineers, geologists, landmen, regulatory experts and attorneys based in San Antonio whose first projects are located in the Delaware Basin in West Texas.

Alex Dornfeld, geologist at Ozona who also serves as asset geologist at San Antonio-based BlackBrush Oil and Gas LP, said this year more or less marked the company’s debut at a conference.

“The skill sets are transferable so I think those who want to do [carbon capture] have a head start if they’ve been working in oil and gas,” he told Hart Energy from the joint Ozona/BlackBrush booth. “I think [carbon capture] seems to be here to stay.”

Other than a lot more geology prospects, which as a geologist Dornfeld said he likes to see, Dornfeld also noted a lot more technology at this year’s NAPE Summit.

ThoughtTrace CEO Vandivere also similarly noted that technology had more of a presence at the expo this year.

ThoughtTrace is a Houston-based software company using Artificial Intelligence (AI) and machine learning to streamline categorization, review and analysis of contracts and agreements. Vandivere said ThoughtTrace regularly has a booth at the “deal-oriented” show because it’s the biggest event by far every year for a large concentration of its customers.

“I think the one thing that has certainly changed over the years is a lot more conversation around technology,” he said.

In particular, Vandivere noted visiting with the CTO—not landman—of a pretty good-sized oil and gas company at this year’s event.

“I think that’s a shift,” he said. “Looking back to the first couple of NAPEs I went to, technology was sort of riding sidecar and I would say less so now.”

This is similar to how Enverus is approaching the energy future, he said.

“We are serving our clients on the oil and gas side by continuing to innovate on the platform to help our clients make faster, smarter decisions and as a result save money,” he said. “At the same time, we’re building out our power and renewables platform where we’ve acquired companies.”

“That’s been a pretty huge component as operators and investors are focused on emissions levels and that seems to be one of the biggest pieces of ESG,” she said.

Gillick added that methane alone is going to be a huge focus of investors this coming year, particularly for oil and gas companies whose production remains paramount to meeting the growing demand for energy while the world is still in the early stages of the energy transition.

“As we think about A&D opportunities in the oil and gas space, what investors are looking for are these larger companies that are going to be able to continue to develop oil and gas assets safely and cleanly,” he said.

“I think that will encourage continued transactions in the space this year and beyond as operators look to increase inventory life and give the investor the security of knowing that there’s a duration to the asset that they’ll be able to continue to deliver that cash back,” he added.