Advances in engineering have helped to expand the role of proppants from merely propping the fracture open to performing myriad actions downhole.

The evolution of proppant technology can be likened to that of the smartphone in that it is a widely used product that has developed well beyond its original purpose, with mix-and-match features for multiple applications.

Advances in engineered porosity, detection, encapsulation, raw material selection and manufacturing processes, among others, have contributed to the emergence of proppant as a multipurpose production enhancement tool. With this capability multiple options are now available to meet individual field requirements, providing flexible production enhancement configurations that operators can easily incorporate into their ceramic or sand stimulation programs. These game-changing capabilities bear little resemblance to those of the not-so-distant past, when proppant differentiation was technically limited to density, shape, sieve sizes and strength.

Proppants are still selected largely for their fundamental capacity to prop open fractures and sustain maximum hydrocarbon flow in a wide range of closure stress environments. Engineering advancements, however, have augmented that core role, transforming ceramic proppants into effective chemical delivery vehicles for preventing organic scale and other flow restrictions. Proppants, likewise, are fitted with detectable properties to measure fracture geometry and placement and to provide insight to optimize field development strategies.

To illustrate, an ultraconductive ceramic proppant was successfully combined with scale inhibitors in a deep Gulf of Mexico Lower Tertiary well, with the dual objectives of effectively maintaining flow amid closure stresses between 18,000 psi and 20,000 psi while preventing scale deposition throughout the entire production network.

The field-proven development of porous ceramic proppant infused with inhibitors for the time-controlled prevention of inorganic scale underpins many of the most striking advances of late. Included within the GUARD production assurance platform, the widely accepted proppant-delivered scale inhibition technology (SCALEGUARD) is the first released in the GUARD series as development work directed at preventing production challenges such as halite salt, paraffin, hydrogen sulfide and more continues.

The interconnected and uniformly dispersed porosity manufactured in each grain of proppant is among the key enablers of the dual-function proppant and chemical delivery mechanism. In the proprietary SCALEGUARD technology, the porous proppant is infused with wateractivated scale inhibiting chemicals, with virtually no impact on its fundamental conductivity.

Each chemically infused proppant includes an innovative controlled release technology that enables the slow and engineered release of chemicals. While the porous proppant substrate provides maximum pore space to infuse the chemicals, the exclusive encapsulation process allows a customized treatment designed to the unique characteristics of the well, extending the elution profile and ensuring the most efficient inhibition treatment. Thus, operators can maintain propped fracture integrity in a single treatment while avoiding repetitive conventional scale treatments.

The evolution of proppant from single-purpose fracture propping agents also extends to a traceable tool for precisely determining fracture height and location. The CARBONRT inert tracer technology, applicable for both ceramic and sand-completed unconventional wells, integrates with diagnostic technologies such as microseismic to enable measurements to enhance treatment designs and completion efficiency without the HSE ramifications of standard radioactive tracers.

At the uppermost end of the conductivity scale, the KRYPTOSPHERE ultraconductive ceramic proppant technology delivers the optimal balance of contact, conductivity and durability. Available as a high- or low-density ceramic proppant, the technology is designed to enhance production across the full range of ultrahigh to low-closure stress conditions.

The multifaceted development program, which focused on improving the raw material selection and manufacturing process, resulted in a ceramic proppant with a distinctive microstructure and unprecedented shape, uniform sizing and strength. Every proppant grain is designed with high roundness to increase conductivity and improve the flow profile through the propped fracture. The extremely smooth surface reduces erosivity and protects downhole equipment while lowering flow-path tortuosity. The technology has a low beta factor and, by minimizing non-Darcy flow effects, reduces the pressure drop across the fracture.

With twice the baseline conductivity of high-strength bauxite proppant, KRYPTOSPHERE HD ultraconductive high-density ceramic proppant is designed specifically to withstand the tremendous geomechanical and chemical stresses and cyclic loading of the harshest applications, including deep offshore and geothermal wells. As exemplified in the Lower Tertiary well, this proppant also can be the effective chemical delivery mechanism for treating scale in high-stress applications where reservoir pressures can exceed 20,000 psi.

The companion KRYPTOSPHERE LD ultraconductive low-density ceramic proppant is designed to enhance recoveries across a wide range of stress conditions. This proppant significantly exceeds the conductivity of existing low-density ceramic and has exhibited higher conductivity than intermediate-density and bauxite ceramics. As proven in a deep Utica gas well, which was the play’s highest producer at the time, this proppant addressed the need for improved conductivity and eliminated the need for gel and crosslinked fluids due to its ease of placement.

Additionally, the CARBOAIR high-transport ultralow-density ceramic proppant technology was developed primarily to enhance proppant transport in slickwater fracturing operations or for use in low-gel fracturing fluids. Due to its properties, this proppant improves reservoir contact and fracture conductivity, allowing increased production and EUR.

The low-density proppant is engineered with 2.0 apparent specific gravity, which is 25% lower than conventional or resin-coated sand or standard low-density ceramic proppant, with comparable 30% to 65% slower settling rates. Compared to conventional proppant, this proppant requires lower total mass to prop the same fracture volume, increasing the effective fracture length and height to improve reservoir contact.

In equal-volume fracture programs, the low-density proppant technology reduces water consumption and flowback treatment costs, thereby contributing to lower finding and development costs per barrel of oil equivalent while also increasing production due to the increased conductivity and contact area.

Due to the significantly lower density, 30% less mass of CARBOAIR technology can be used to replace the same volume of sand proppant, thereby reducing the amount of water and chemicals used for the treatment. CARBOAIR technology also provides more coverage across the pay zone, leading to increased production. (Source: Carbo)

The detectable ceramic proppant uses coating technology to set up with no closure stress, making it well suited for gravel pack, frack-and-pack and similar completions requiring very little or no closure stress on the proppant. Incorporating the nonradioactive tracer allows the integrity of the pack to be safely evaluated for the life of the well.

The technology enables the creation of a high-integrity, high-permeability annular pack in the zero-compressive- strength environment of the annulus and one that retains its integrity under high water injection rates. The technology resolves a longstanding issue with the inability of standard resin-coated proppant to bond and create a stable pack in the absence of compressive forces. Those low-integrity packs, in turn, were prone to proppant washout, resulting in voids, channels and, at worse, complete loss of the injector or producing well. 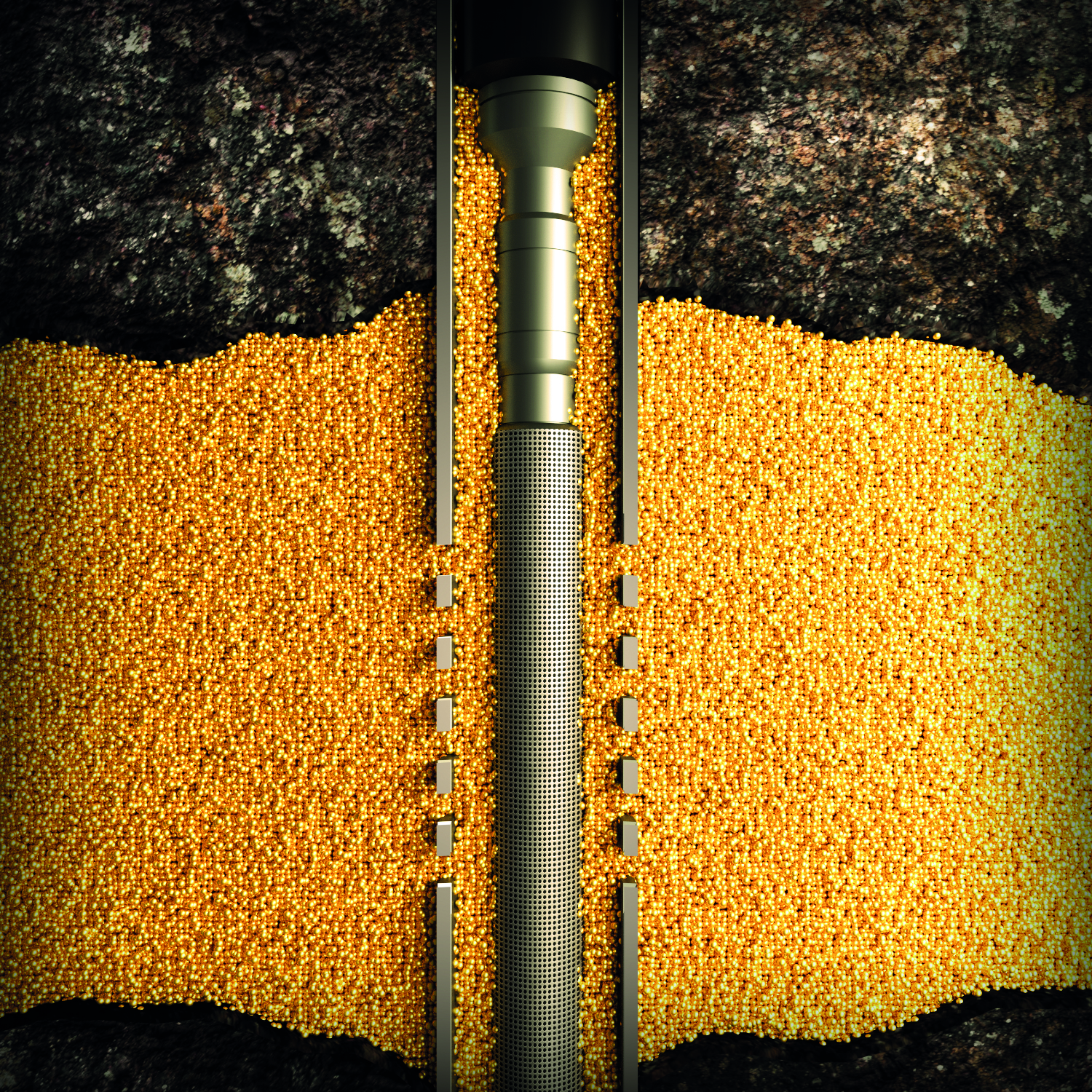 Much like the continual introduction of new smartphone apps, the merging of new-generation proppants with a host of treatment and analytical options and flexible configurations will provide increased opportunities for operators to tailor stimulation programs to their specific field requirements, optimizing development strategies and maximizing the value of their assets.