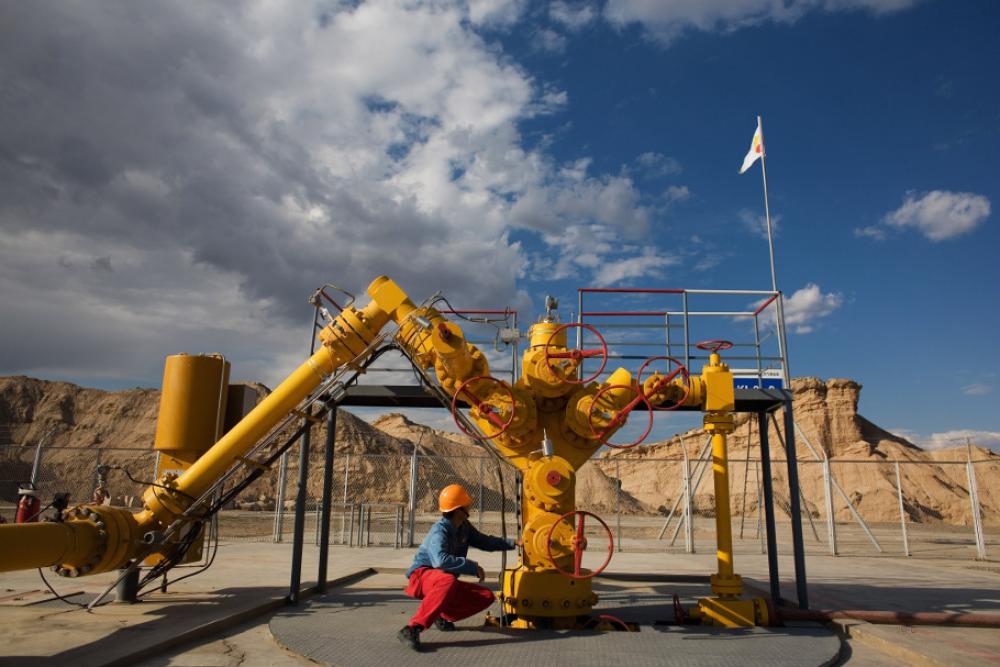 Chinese companies are estimated to have invested more than $8 billion in U.S. shale plays for various reasons, including a combination of financial returns, investment diversification and technology. Investing also has given them a bird’s eye view of U.S. regulatory and managerial practices in the shale gas sector.

But the investment and learning are also going the other way, with several U.S. and European majors playing a crucial role in prying open China’s fledgling shale gas market.

Although current progress remains relatively slow, with the deep and complex shales in China’s basins (compared to the U.S.) and the scarcity of water proving tough nuts to crack, China has a government that is 100% behind the industry’s efforts to recreate the American shale gale within its own borders. This is hardly surprising when estimates by outside authorities such as the U.S. Energy Information Administration put the country’s technically recoverable resources at a size two-thirds larger than those in the U.S. at 31.6 Tcm (1,116 Tcf), making it the world’s largest.

These will continue to shape China’s shale gas development as already evidenced by the money sunk so far by China’s state-owned giants into its domestic shale exploration and development activity. It had already invested close to an estimated $2.5 billion and drilled 322 wells as of June 2014, according to official China reports. The number of wells is now around the 400 mark, with most of that activity involving China National Petroleum Corp. (PetroChina) and China Petroleum & Chemical Corp. (Sinopec). This activity has resulted in a national production forecast of 1.6 Bcm (56.5 Bcf) of shale gas for 2014.

However, alongside the estimated $65.5 billion spent by U.S. companies three years ago (a long time in the fast-moving unconventionals business) to drill more than 10,000 shale oil and gas wells in North America, according to the American Petroleum Institute, China’s domestic efforts up to the present day still pale in comparison.

With last year’s annual figure at 1.6 Bcm of shale gas, the likelihood is that the country’s 2020 shale gas production target will be cut to a more achievable—but still challenging—30 Bcm (1.1 Tcf). The 2015 figure of 6.5 Bcm is perhaps more achievable based on the latest forecasts.

Picking up the pace

Even with more realistic targets being put in place, the pressure remains on the state companies involved to pick up their pace of activity to meet the central government’s dictates.

One of the latest moves saw PetroChina and Sinochem link up to tap shale gas from five blocks in the southwest of China. The two firms, together with State Development and Investment Corp. (SDIC) and local state enterprise Chongqing Institute of Geology and Mineral Resources, jointly set up Chongqing Shale Gas Exploration and Development Co. Ltd., with a total registered capital of 6 billion yuan ($974.96 million).

With the aim for the new entity to start production in 2017, a total of up to 26.05 billion yuan ($4.2 billion) has been earmarked to be invested in exploiting the five blocks, which cover a total of 15,600 sq km (6,023 sq miles). Although not yet formally confirmed, Chongqing Shale Gas E&D is expected to drill an initial 16 exploration and appraisal wells with up to 360 production wells to follow if the block potential is realized. The municipal government puts Chongqing’s exploitable shale gas reserves at 2 Tcm (70.6 Tcf).

PetroChina holds a 40% interest in the new company, with Sinochem holding 20%, SDIC 39% and a local Chongqing company 1%.

PetroChina also is continuing to ramp up its ongoing activities with Shell, building on the strong success of their Changbei tight gas project in northern China to target further tight gas and new shale gas prospects.

Shell operates Changbei in Shaanxi province under a production-sharing contract (PSC) with PetroChina, with the field producing since 2007 and currently flowing 3.3 Bcm (116.5 Bcf) per year, mostly to supply gas to northeast China (including Beijing). PetroChina itself sees Changbei as a model cooperation project, with the state oil company’s top management going on record recently to say in a press statement, “Our upstream business should learn from Changbei.”

Much of that learning is being applied to the shale gas potential of the Fushun-Yongchuan Block in Sichuan province. The block covers an area of about 3,500 sq km (1,350 sq miles), for which Shell and PetroChina signed in March 2012 the first-ever shale gas PSC in China. This milestone deal for the Shell-CNPC partnership was approved by the government in 2013, with an ambitious drilling program underway.

PetroChina is already saying that it is on course to surpass a 2.6 Bcm (91.8 Bcf) target for shale gas production in 2015 from its fields in Sichuan.

“Based on the production of our test wells, we are very confident to achieve or even beat our estimates for 2015,” said Xie Jun, deputy general manager of PetroChina subsidiary Southwest Oil & Gasfield Co., in a recent Bloomberg report. This was a “very conservative” estimate, he added. PetroChina aims to produce 5 Bcm (176.6 Bcf) itself by 2017 and 12 Bcm (423.8 Bcf) by the end of the decade, said Xie, with large-scale commercial production from Fushun expected to get underway during the first half of 2015.

The state-owned enterprise has nine shale gas exploration rights in Sichuan and Chongqing, with four underway or close to commercial production. It also has previously signed agreements with other companies such as ConocoPhillips in late 2012, with whom it is still studying the potential development of unconventional energy resources in the Qijiang shale gas block in the Sichuan Basin. It has other cooperation agreements in place with Chevron, Exxon Mobil and Hess.

China’s hopes up until now have largely rested on Sinopec, which operates the country’s largest shale gas-producing project in Fuling. This flagship project already produces 3.2 MMcm/d (113 MMcf/d) of gas, with Sinopec now projecting a 5 Bcm total annual figure for 2015 after wells drilled over the last 18 months performed better than anticipated. The company is predicting the block could reach 10 Bcm (353.1 Bcf) of production per year in 2017.

In August PetroChina’s president, Wang Dongjin, admitted that PetroChina was about “a year and a half behind Sinopec in shale gas exploration because we concentrated our resources on the Longwangmiao natural gas project in Sichuan,” according to Bloomberg.

The geographical structures in PetroChina’s fields in southern Sichuan are more difficult to drill than the Fuling project, with the gas reservoirs smaller, according to Xie.

PetroChina’s plans for the whole of 2014 and the first half of 2015 are to invest 13 billion yuan ($2.1 billion) on Sichuan shale gas E&P. Drilling cost per well in the region is put at about 65 million yuan ($10.5 million) at present, which should come down following large-scale drilling and better understanding of the geology, according to Zhou Zhibin, deputy general manager at Southwest Oil & Gasfield.

“We have completed most of the drilling work, and the drilling of additional wells will continue into 2015,” Shell China spokesman Shi Jiangtao told Bloomberg. “We see that the Sichuan geology is challenging, and we are approaching this at the appropriate pace. We continue to evaluate and should know more toward the end of 2014 or first-quarter 2015, when we will decide how to move forward with each of the projects.”

Shell spent about $1 billion in 2013 in the Sichuan Basin, focused on exploration and appraisal drilling and geological studies.

For PetroChina, shale gas output in the area will be complimented by considerable conventional gas reserves. The Longwangmiao site in southeast Sichuan has the capacity to produce as much as 11 Bcm (388.5 Bcf) of gas annually.

Having a supply chain in place that can handle future activity will be crucial, as it was in the U.S. According to a wide-ranging study commissioned by the U.S. Energy Association and produced by Columbia University’s Center on Global Energy Policy entitled “Meeting China’s Shale Gas Goals,” China is making substantial progress on this front.

The study, which was released in September and saw several dozen interviews conducted with individuals from across the full E&P sector, government and universities in China, highlighted among many other things that 3,000 fracturing vehicles have been put into field operation, according to the country’s National Energy Administration (NEA).

“Equipment that includes openhole packers, frac[k] plugs and other downhole fracturing tools have been developed, with some now being exported to the North American market. NEA says that China has gained experiences in horizontal drilling, well completion and large-volume fracturing technologies,” it stated in the study.

However, it continued, “Shale gas drilling costs have been high. One expert we spoke with estimated that drilling time at Chinese sites averages 250 days, as compared to 10 to 20 days at many U.S. shale plays. According to one estimate, Sinopec and CNPC’s short-term losses from shale gas drilling through the end of 2013 are close to $1 billion.”

Overall, the study’s findings indicate that China’s road toward its own shale gale could be a long one, and among the many important factors it flagged was that of “innovation.”

In one of its concluding remarks it stated, “Growth in China’s shale gas sector will require innovation, as technologies and approaches developed in the U.S. context are applied in China. Some of these innovations may be relatively straightforward, such as transport equipment redesigned for mountainous conditions. Others may be more challenging, such as new hydraulic fracturing techniques to respond to China’s unique geology.

“Foreign partners can help contribute to innovation if given incentives and allowed to do so. The extent to which China creates conditions in which innovations and innovators can thrive will be central to the growth of the Chinese shale gas sector.”

Brazilian oil major Petrobras said July 7 it has started to decommission its platform P-12 in the Campos Basin after receiving permission from the Navy and environment and oil agencies.