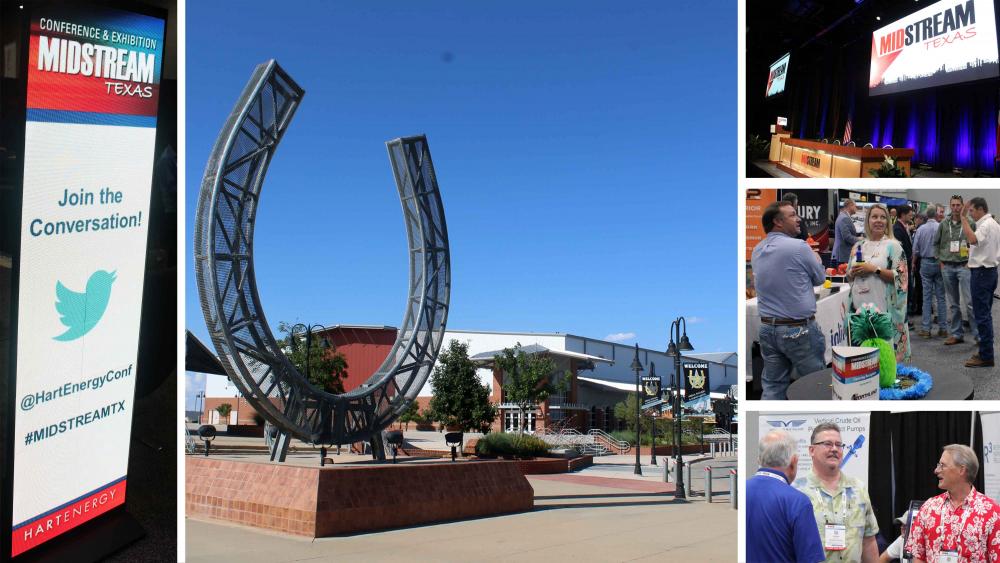 From left, a digital sign on the Midstream Texas exhibition floor; the Midland County Horseshoe, venue for the conference; upper right, the stage was set the evening before the conference started; attendees enjoy the opening reception on June 5. (Source: Hart Energy)

MIDLAND, Texas—The Midstream Texas conference and exhibition got underway this morning at the Midland County Horseshoe Pavilion. The following is a rundown of updates from the Hart Energy Staff on site. You can also find these updates on Twitter at @HartEnergyConf.

Hart Energy will have multiple detailed articles, videos and data from the conference available to subscribers on HartEnergy.com in the coming days and weeks. Check the site for coverage on each presentation.

In the water spotlight, Wes Long, technical projects director at Chevron Phillips Chemicals, discussed the problems surrounding produced water the #Permian is facing as the result of a high water cut in the West Texas area. He said the increased truck traffic in the Permian is astonishing and added economic and environmental responsibilities are adding pressure for the industry to find a solution to trucking produced water.

He also spoke on a project in South Texas’ Eagle Ford Shale that eliminated half a million trucks resulting in happy landowners, safer roads and lower emissions. 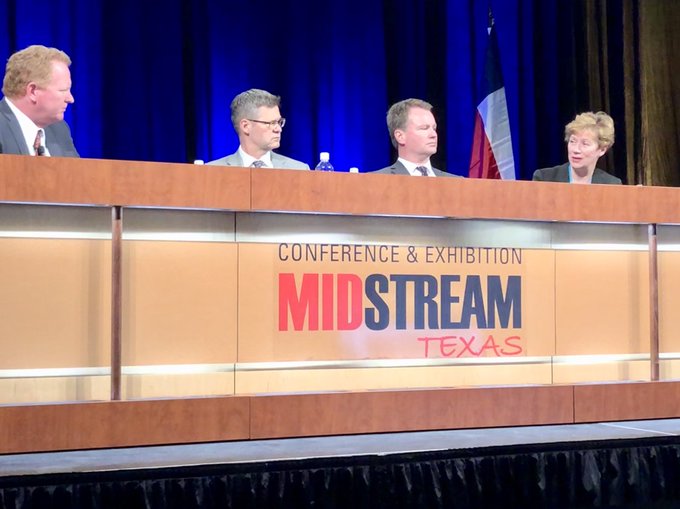 The financing roundtable (above) featuring Jeff Fulmer, CorEnergy Infrastructure; Robert Coble, Oppenheimer;  and Becca Followill,  U.S. Capital Advisors. They discussed what the midstream sector can do to appeal to investors put off by a sluggish energy market. Followill said midstream companies still have a lot of work to do.

“Incremental investor has to be institutional,” she said.

Fulmer added that companies need to focus on returning capital to investors. One approach by has been selling assets, but he noted, “there’s more clever ways to finance and maintain control.”

Coble said he’s seen an active A&D market for midstream. He noted some sales of public assets to private equity-backed firms have been at higher valuations than the public equities are trading themselves.

U.S. shale gas is reaching more of the world by LNG exports, said Greg Haas of Stratas Advisors, in closing out the morning session. If currently proposed projects are completed, Stratas Advisors believe the result will be 28 Bcf/d of LNG export capacity in the U.S.

Texas and the Permian are a trove of hydrocarbon value, Haas said. But as demand shifts, so must strategy. “Drill local and sell global,” he said. 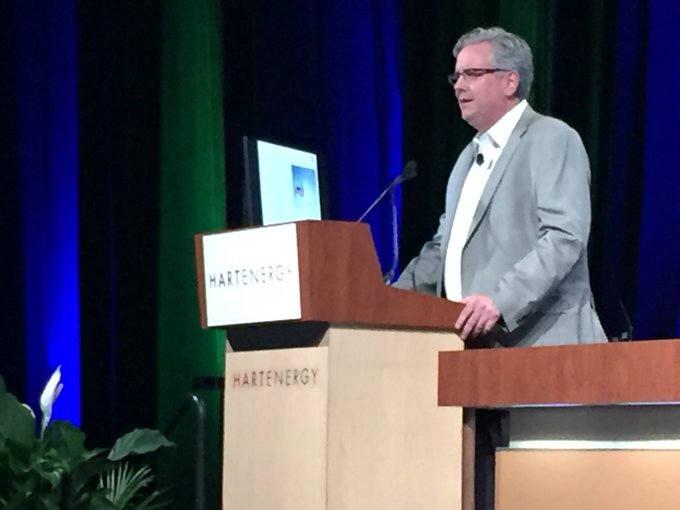 The afternoon got started with Bo McCall of Moda Midstream (above) taking the stage and said the Ingleside area in Corpus Christi will be a preferred location for exports in the U.S. The site, which Hart Energy visited in the fall, was formerly used as a Navy base. Traits for an aircraft carrier harbor work well for crude oil export terminal, he said.

Jamie Welch,  EagleClaw Midstream Ventures opined that the Anadarko Petroleum deal was really a fight over Delaware Basin. “The world has noticed us,” he said.

However, he painted a bleak picture of natural gas takeaway. Even with new pipeline, if you look at the forecast, we’ll be back to where we were in a few years. Always playing catch-up, he said. 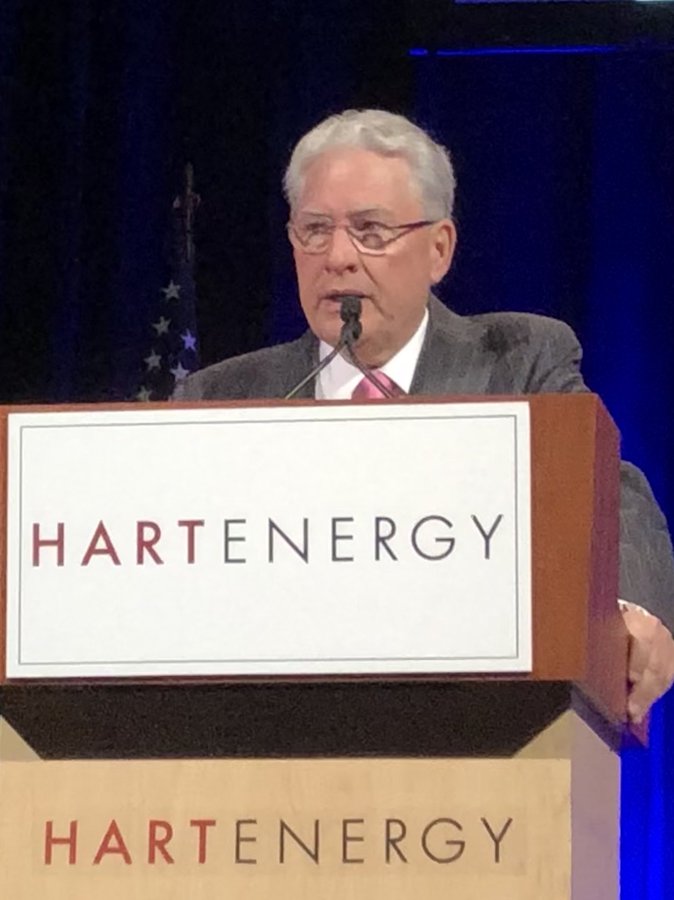 Earlier in the day, Bob Phillips, Crestwood Equity Partners Chairman and CEO (above), opened the conference by saying, “Permian is truly the greatest play in North America and possibly the world.”

He also spoke about natural gas prices, which have recently fallen to all-time lows in the Permian Basin. “Help is on the way,” he said, noting that ~4.6 Bcf/d of new capacity is set to come online. “Can’t come soon enough for the Permian.”

Dave Marchese, CEO of Houston-based Caliche Development Partners, kicked off the first panel, noting all roads lead to the U.S. Gulf Coast because of a dramatic increase in NGL supply resulting from the shale revolution.

He added, “Ethane storage to become a more critical function of the NGL value chain.”

That same panel continued with Clay Bretches, president and CEO of Altus Midstream, also speaking of the importance of the linkage of the Permian Basin to the U.S. Gulf Coast. Altus Midstream, a pure-play company formed by Apache and Kayne Anderson last year, is “open for business,” he proclaimed. 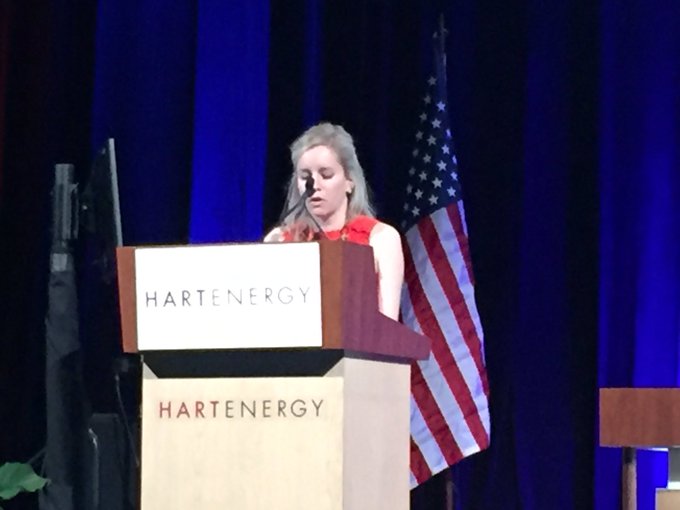 GPA Midstream’s Charlotte Sawyer (above) was up next to talk policy and regulation. “We’ve never met a regulation we didn’t want to kill,” she said. She added that the association is going after like methane regulations.

Scott Potter, managing director of business development at RBN Energy took the podium during the late morning and told the audience the Permian is reaching a point that it will produce as much as entire U.S. did 15 years ago. “I don’t think $53/bbl will slow down the Permian,” he said.

He also assured the crowd that the U.S. is ok export capacity for crude oil even without VLCCs. There are many plans for VLCC terminals, he said, but not all will be built.

The company had initially planned to ramp up output for this first phase of the Liza project to its full capacity of 120,000 bbl/d in August.