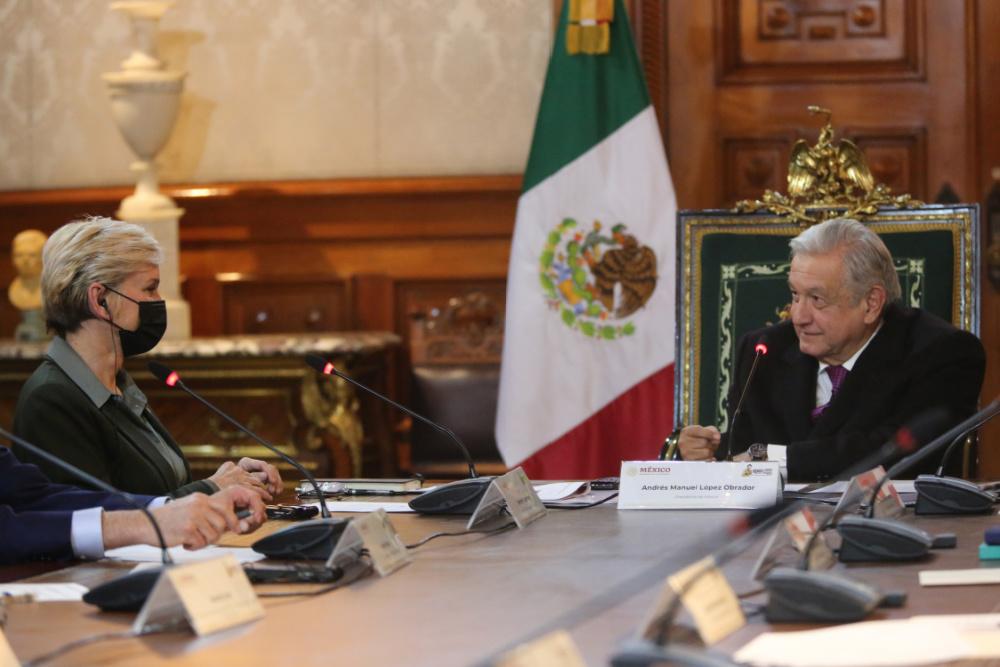 The Mexican president’s bid to tighten state control of power generation drew scrutiny on Jan. 20 during the visit of a top U.S. energy official, who faces pressure from her party to move Mexico towards a greener energy policy.

Sitting down with Ebrard, Granholm said: “Mexico has such an enviable, an amazing series of clean resources that we want to talk about. And, like all friends, there may be issues we're also going to work on, on electricity reform.”

Lopez Obrador, who said talks with Granholm had been “cordial” and marked by “respect, understanding and a desire for cooperation on development,” had earlier said he planned to set out the reasons why he was pursuing the market shake-up.

The leftist leader calls his initiative to change the constitution to favor the state power utility a matter of national security, saying past governments skewed the market in favor of private capital.

Not only did this weaken Mexico’s cash-strapped state-owned energy firms, it also hurt consumers and public finances, according to Lopez Obrador, who says he is committed to lowering the country’s carbon footprint with more hydroelectric power.

However, critics say his plan to give market control to the utility, the Comision Federal de Electricidad (CFE), is hurting investment in wind and solar power, will increase costs, and make Mexico too reliant on fossil fuels, as the CFE uses hydrocarbons to generate much of its power.

It has also caused diplomatic ructions.

In a letter ahead of Granholm’s visit, four Democratic senators urged her and U.S. Secretary of State Antony Blinken to “more forcefully express concerns” about Lopez Obrador’s energy agenda, calling it antithetical to U.S.-Mexico relations.

Lopez Obrador’s power bill is in Congress and is expected to be voted on by the end of April.

Recently, the European Union ambassador to Mexico said the initiative was crimping investment as it could hinder companies' commitments to boost renewable energy use.

U.S. carmaker General Motors, a major investor in Mexico, has warned that, without a solid basis for renewable energy generation, Mexico’s auto industry could suffer.

The flagship of Mexican manufacturing has struggled under Lopez Obrador, with automotive output falling for a fourth year running in 2021. Gross fixed investment levels are about 16% lower than when he won election in July 2018.

Federico Peña, a former U.S. energy secretary, said that rather than insisting on a policy that undermined the confidence of U.S. investors, Mexico should be regarding the transition to renewable energies as a “win-win” for both economies.

“Look at the resources that Mexico has: sun, wind, open space, workers,” he said. “They have experience in building highly sophisticated manufactures. They’ve got great potential.”

2022-03-10 - Chevron Phillips Chemical Co. LP entered a settlement with the Justice Department to resolve allegations that it violated the Clean Air Act and state pollution laws at three of its petrochemical facilities along the Texas Gulf Coast.