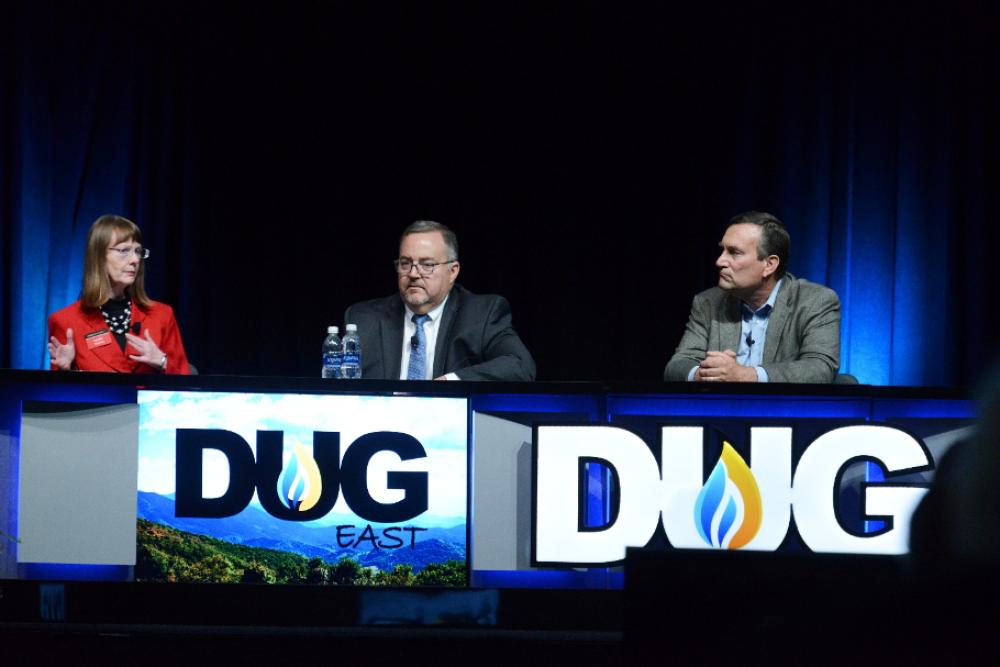 PITTSBURGH—The positive environmental impact of natural gas is clear in that it emits less carbon dioxide than oil and coal. But the release of its primary component—the potent greenhouse gas methane—is holding the attention of industry players and others as gas production and demand increases.

Methane emissions were discussed during Hart Energy’s recent DUG East Conference and Exhibition. Fugitive emissions, if not kept in check, can negate the benefits of natural gas as it escapes from equipment and pipelines. However, techniques and technology are already available to monitor and capture methane, panelists said.

Going back to emissions inventories can point companies in the right direction and give insight on emissions footprints, according to Jim Sewell, environmental manager for Shell Oil Co.’s Appalachia region. “They can be criticized and not complete, whatever the story might be,” Sewell said of emissions inventories. But “They still do inform you on what your emissions are and where you can do the most good whether or not it’s NOx emissions or methane emissions or VOCs [volatile organic compounds].”

Other proven technologies—no longer considered new—include use of infrared cameras and flame ionization detectors that sniff out leaks, Sewell said, adding simple technologies like the “soapy water” technique can also be used to find leaks. Bubbles form in the presence of leaks or holes.

Companies also have been using green completions. The process involves separating gas and liquids from the flowback, enabling the gas to be treated and used or sold. Companies such as Royal Dutch Shell Plc and Equinor ASA are piloting methane-detecting technology that uses laser-based sensors developed by Quanta 3 for continuous leak detection in hopes of finding and repairing leaks early. Others like Southwestern Energy Co. have tested drones for leak detection and conducted airplane flyovers to detect so-called “super emitters.”

Efforts are paying off.

Methane emissions have dropped by 14% since 1990 as gas production has increased by more than 50% thanks to technology advancements, according to the American Petroleum Institute.

But varying methodologies has often led to conflicting reports on just how much methane is being released from gas sites, putting the emphasis on the need for good data.

“It’s about data; it’s about good data; it’s about presenting that in a way that the public—whoever the public might be—can assimilate that and incorporate that into their thinking,” said Thomas B. Murphy, director of the Penn State Marcellus Center for Outreach and Research.

Penn State conducted a study of fugitive methane emissions that included a look at emissions from upstream operations in Pennsylvania. Appalachian operators produce more natural gas than any other major basin in the U.S. The study aimed to identify points of leakage for methane, Murphy said, noting the emissions might have come from swamps, landfills, livestock operations, coal mines and both the conventional and unconventional industry.

But “the leak rate is actually very low” from upstream operations—only 0.4% of production, Murphy said.

Using technology to find and resolve leaks through remediation and mitigation techniques are key, he added.

Operators are the first line of defense against emissions, according to Sewell.

“They find the leaks. They can hear them, smell them, see them in some cases,” he said, advising operators to make adjustments daily. Voluntary efforts and some degree of smart regulation are needed to reduce emissions further and get everyone on the same page, he added.

Pennsylvania is working to curb methane emissions, having rolled out new general air permit requirements that take effect in August. The new permits, called GP-5 and GP-5A, address methane emissions and other air pollutants from unconventional well sites, pigging stations and midstream and natural gas transmission facilities. The regulations require use of the best available technology, outlines specific performance testing requirements and more frequent checks for leaks along pipelines and connections among other rules.

“It is what it is and we’re going to have to live with it going forward,” Sewell said of the new rules, noting companies will have to adjust. But he reiterated the need for the industry and regulators to continue working together to find solutions.

Murphy added that “we need to make sure that we are putting science in this conversation as often as we can,” especially given the reality that more people are joining the conversation.

Shell is facilitating discussion on the topic via its Rational Middle Energy Series, which Sewell said he uses as an employee training tool to show different viewpoints and what the company is doing.

“Those who are interested in this dialogue have already started to form an opinion about what they think—is it [natural gas] good, is it bad, or somewhere in between,” Murphy said, referring to the public. “We’re starting to see people divided at the camps. … You have drill baby drill on one side and not over my dead body on the other side, but most people we see are in the middle of the dialogue.”

The Froskelår Main exploration well, drilled in production license 869, has a gross resource estimate of up to 130 million barrels of oil equivalent, according to Aker BP.