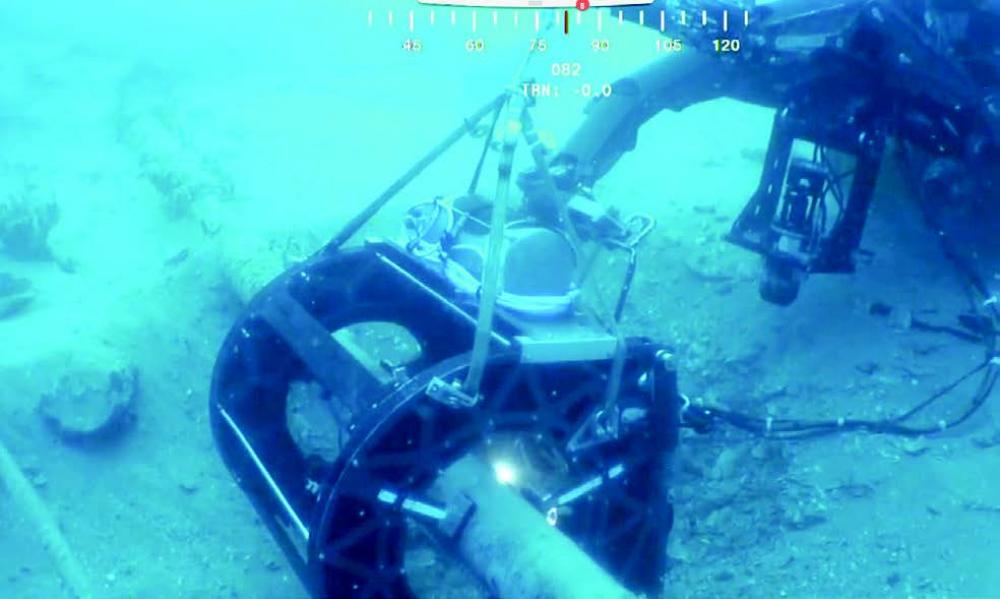 The Neptune ROV completed its deepest inspection to date in 2017 at 2,250 m water depth with equipment rated for 3,000-m buoyancy. (Source: Oceaneering)

Moving tools into deepwater environments is a challenge. Even individual components rated for 3,000 m (10,000 ft) do not always perform as anticipated when they are connected in a system. Regardless, the tools are expected to work. So as companies develop inspection tools for deployment in deeper water, considerable effort is invested in eliminating impediments that could compromise performance.

According to Mike Killeen, technical solutions lead for global subsea inspection at Oceaneering, “Everything in an inspection is some kind of compromise because no one technique can do everything.”

In cases where an intelligent pig can be used to inspect a pipeline, things are fairly straightforward and cost-effective with regard to coverage per dollar spent. As long as the pig can transit the line, 100% of the line can be inspected.

The problem is that about 30% of the pipelines in operation today are not “piggable.” Sometimes there is no way to launch and/or receive the pig, or the flow is too low. Where sections of pipe have been replaced, introducing a line with a different schedule, the change in diameter can prevent a pig from passing. When a line has never been pigged, and the internal condition is unknown, owners often are leery of deploying a pig that could encounter extensive wax buildup, sand deposits or asphaltines.

Successfully launching tethered inspection tools depends on knowing the number of bends in the line and their radii, Killeen explained, because friction from the tether as it pulls tight around a bend could make it impossible to retrieve the tool in an emergency.

“If you can’t get a pig inside a pipe, the other option is to inspect it externally,” he said.

When a pig is not the answer, sometimes external automated ultrasonic testing (AUT) is.

“Used by divers in shallow water since the early ’90s, AUT delivers precise encoded measurements to plus or minus fractions of a millimeter of accuracy,” Killeen said, “but it isn’t always feasible.”

Full corrosion mapping with an external UT tool requires 360-degree external access to the pipe, which requires dredging. The coating can be an issue depending on sound penetration, which in some situations means coatings must be removed.

“Even where UT can be used, it is not fast, and there are associated costs of the vessel and the ROV to be taken into account while you’re gathering data,” he said. Digital radiography is another option, but it does not provide sub-millimeter accuracy measurements.

“Unlike inspections that use a pig, external UT and radiography inspections do not cover 100% of the line due to the associated costs of doing so, but they yield sufficient data to assess a pipe’s general condition.”

Despite their inherent limitations, these technologies are providing deepwater inspection capabilities that were not available less than a decade ago. 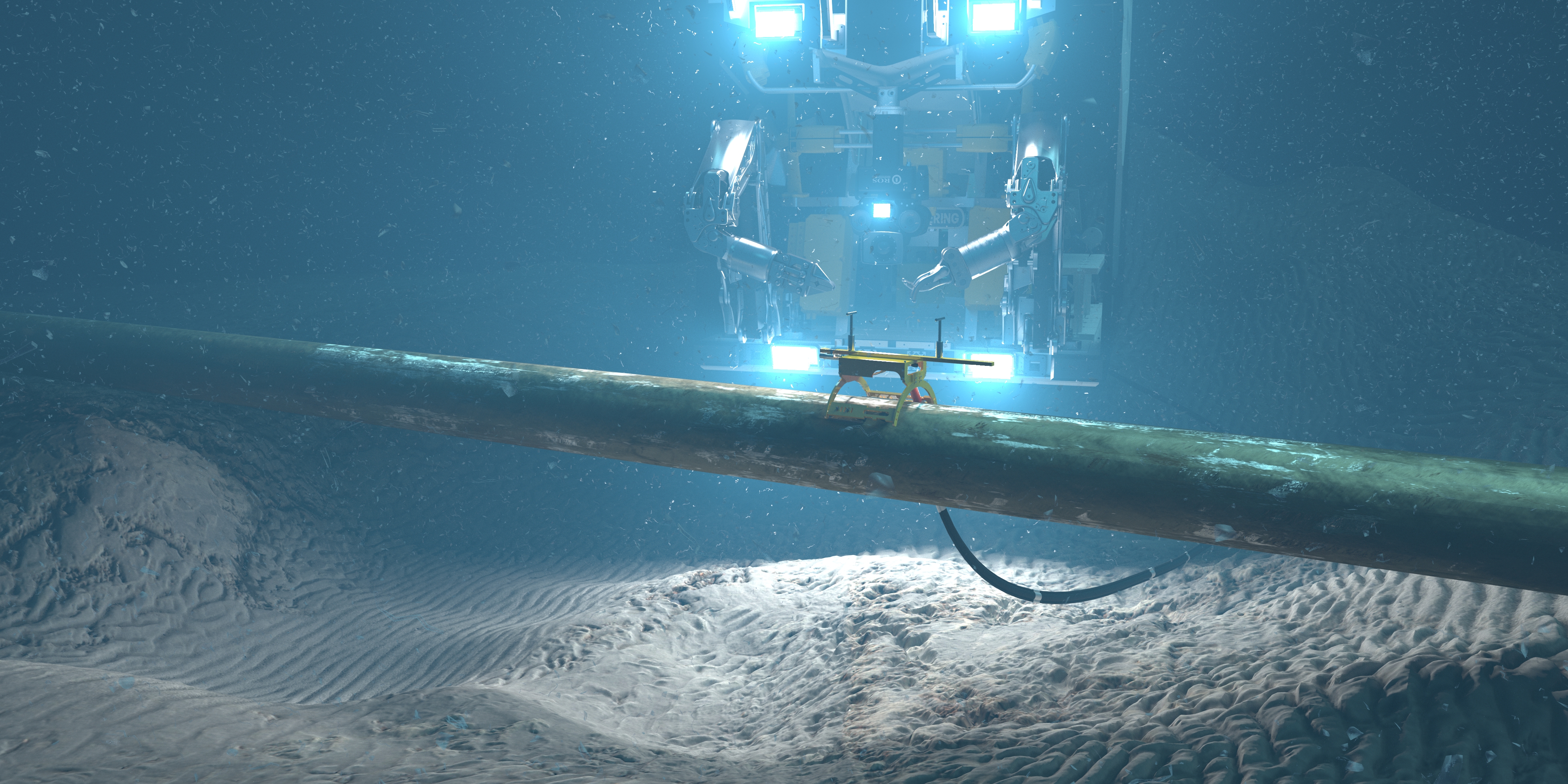 The first ROV scanners were not intended to work at 3,000 m but to replace divers in much more shallow inspections, Killeen explained. When Oceaneering introduced its first Neptune UT tool, an ROV-deployed AUT scanner, the buoyancy rating was considerably less than 1,000 m (3,300 ft).

“We didn’t need tremendous depth capability, because the water depth where we were doing mostly flexible riser inspections in the North Sea was at maximum 500 m [1,600 ft],” he said.

The depth of the ROV-deployed tooling changed when demand for flexible riser inspections began coming in from West Africa. “To work in West Africa, the equipment had to have greater depth capability,” he said.

Most of the work continued to be in the North Sea, but global demand brought with it expectations for increased depth capability. In 2013 Oceaneering made the big step to 1,400 m (4,600 ft). Continuing to push the boundaries, the company completed its deepest inspection to date in 2017 at 2,250 m (6,400 ft) water depth with equipment rated for 3,000-m buoyancy.

Inspection efficiency evolved along with depth capabilities, Killeen said. “Moving from doing straight-up corrosion mapping with pulse-echo phased array has proved to be three to six times faster than conventional methods,” he noted.

Escalating the ability to work at greater depths is one of Oceaneering’s primary goals, he said, pointing to the company’s subsea electromagnetic acoustic transducer tool as an example. “Over a span of six years, it went from being used in less than 100 m [330 ft] water depth to 1,300 m [4,250 ft],” he said.

Oceaneering takes time to consider the long-term prognosis for each tool, Killeen said. “Ideally, we want it to go to 3,000 m with every individual component rated for that depth. We want 100% spares. We have an ideal in mind for tool performance and then look at what has to be done from an engineering standpoint to get it there,” he said.

For subsea AUT, this approach led to using hyperbaric testing to evaluate functionality at greater pressure levels that would be encountered at the deployed depth, beginning with ambient conditions and increasing depth incrementally to 3,000 m.

Set up in a hyperbaric chamber, the AUT tool moves a probe axially along a pipe for 20 in., then circumferentially around the pipe and then back 20 in. axially while engineers check to see if the depth has affected the mechanics.

“We look for things like whether it slowed down because the tolerances were tight because of the greater pressure,” Killeen explained. “It’s those little things that don’t seem like they would introduce serious problems that can trip you up in the field.”

The company also is taking specialist inspection techniques that are used topside and figuring out how to use them subsea. “There is way more technology used onshore and topsides than subsea,” Killeen said. “The challenge is figuring out what fits and where because you’re going to spend so much to develop and test it and get it accepted that the capability has to be worthwhile and deliver something different.”

The next advancement, according to Killeen, is likely to be in a different area altogether. “I think one of the big things that will come to the fore over the next few years will be permanently installed monitoring systems with resident ROVs,” he said.

Because so much mobilization is required for an inspection, leaving the ROV in situ subsea for periodic redeployment could be advantageous—allowing the ROV to ping the area of interest occasionally and having experts evaluate the data. “I don’t think this is a million miles away,” he said.

Another advancement will be derived from a bigger toolbox. Having access to more offerings from a single source would make it easier to find the right solution more quickly, simplifying evaluation of the pros and cons. This is one of the reasons Oceaneering is partnering on techniques to deliver deepwater inspection solutions.

Guided wave inspections are an example, Killeen said, pointing to work Oceaneering is doing with an equipment manufacturer to deliver this service topside. Now the companies are working to deliver the same service subsea, providing a complete solution by bringing subsea AUT capability and proven guided wave equipment together.

“Using new technologies and combinations of technologies in creative ways is what will move the industry forward,” Killeen said.

2022-08-30 - “We are prepared, ready. We have discussed and agreed with them everything related to the immediate restitution of operations. But it no longer depends on us. The ball is on the U.S. government’s court,” Venezuelan oil minister Tareck El Aissami said of Chevron’s operations in Venezuela.