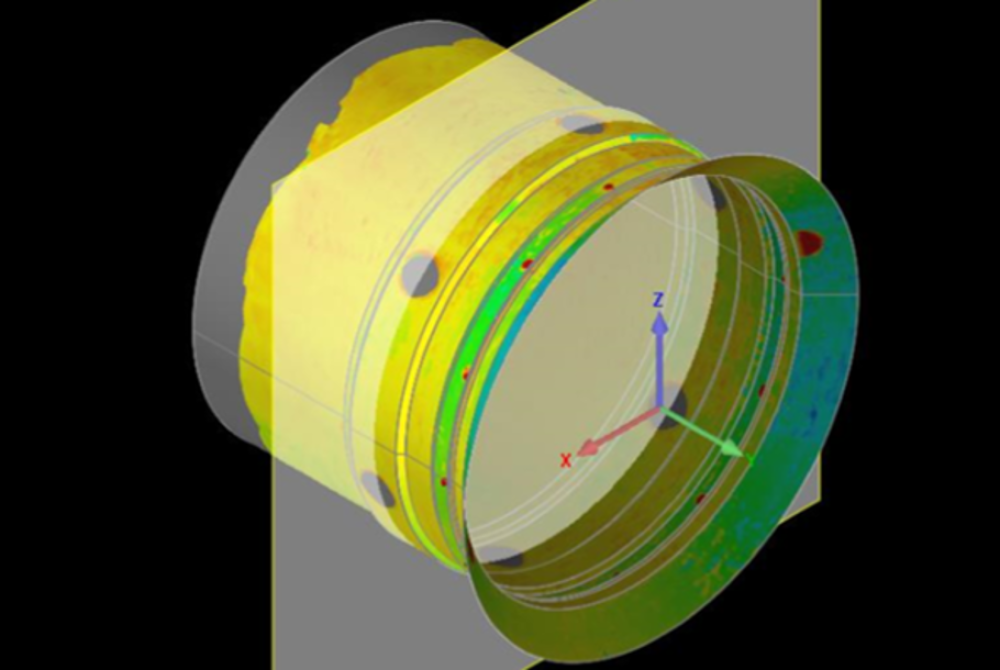 A 3-D laser rendering of the internal bore of a wellhead shows how cross-sectional slices can be taken to extract specific geometries of interest. (Source: Ashtead)

New technologies that produce high-precision, detailed 3-D imagery of underwater structures, sites and objects offer a way to efficiently obtain high-quality data as well as reduce costs and engineering and operational uncertainty. Laser scanning is one technique gathering momentum across the industry for doing just that.

There are many applications within the subsea sector where the ability to make precise engineering measurements in 3-D is useful. These include pipework, conductor and wellhead interfaces—dimensional inspection for damage, wear, corrosion and erosion, seal bore inspection and reverse-engineering applications. Without accurate dimensional data, the risk of getting things wrong during operations can be high and have safety implications.

Laser measurements are widely used topside but have only been used for subsea in the past five years. The technology has overcome the challenges of marinization and the optical distortion that comes with underwater use. Historically, photogrammetry, sonar and physical measurements have been employed subsea to collect engineering data. With the advent of subsea lasers it is possible to achieve more accurate measurements cost effectively and in real time.

“One of the big issues with lasers that come into play when you’re working subsea is the refraction and distortion of the images that you need to be able to calibrate to be confident in the measurements that you’re taking,” said Brett Lestrange, Ashtead Technology’s regional director for Europe. “The manufacturers have managed to get to a point where the calibration process is quite well-defined. They have demonstrated the ability to measure subsea consistently using test pieces.”

In its infancy for subsea use, laser technology is advancing. One of the issues is visibility turbulence (i.e., particles in the water) that create noise. There are different ways to reduce the effect of noise, and that’s where some of the technology will move forward.

Another area of interest is developing laser platforms for dynamic use. “That’s where a lot of focus is right now, getting the lasers on our moving platform,” Lestrange added. “Instead of having a static tool you can cover a much wider area. But the static tool is still necessary for sub-millimeter accuracy and will be for some time.”

ToF lasers measure the time taken for an emitted pulse of laser light to be reflected back to the detector. “Knowing the speed of light through the medium allows the calculation of distance,” he said. “This enables the creation of a dimensional model of the object in question by taking many thousands of point measurements and moving around the object.”

ToF works best where there is some offset from the object; typically, in subsea this is from 2 m to 30 m (about 7 ft to 98 ft) depending on visibility. These lasers are commonly used to take field overview images of the installed subsea architecture with centimeter accuracy.

Triangulation lasers use a laser stripe to swipe across an object. “The reflected light is captured by an offset camera.” Lestrange said. “The angles formed between the laser emitter, the point of reflection on the object and the angle of detection at the camera allows the precise distance to be calculated, building up a dimensional image of the object.”

Triangulation is better at precise inspection but less useful for inspection at distances typically larger than 10 m (33 ft) as the angle of incidence and reflection become small.

Both methods produce an almost instant 3-D point cloud of the object being scanned, which can be directly manipulated in software to provide metrology information.

According to Lestrange, dynamic scanning, which is where the laser is attached to a moving ROV and gets its location reference from the ROV INS/gyro, provides centimeter-level accuracy at best. “This is for wider-area mapping,” he added. “The position reference accuracy from the ROV limits the overall measurement accuracy that is possible.”

Lasers are a visual instrument in that they work by emitting light and measure the reflected light returned. “If the object can’t be seen because of turbidity subsea making useful measurements will be a struggle,” he continued. “Being a non-contact measurement helps avoid stirring things up, but this constraint needs to be considered.

“In theory the power of the laser can be increased, but that also increases the back-scatter and signal noise. For all laser types, deep, dark and clear waters are best. Strong ambient light or even bright sunlight in shallow water reduces the effective range of the laser.”

One recent application of the technology was to assess in situ the condition of a wellhead profile that had laid subsea for several decades. The information would ultimately determine whether the wellhead was in a state to be safely used in planned late-life field extension operations.

“This is a typical late-life subsea application where precise dimensional analysis of a relatively inaccessible object is required to de-risk a high-value subsequent operation,” Lestrange said. “As always, the main question, and one that is often neglected in the excitement around the technology, is what are the specific requirements of the job? What is to be measured and to what level of accuracy?”

He explained these data requirements drive the scan plan—a detailed procedural document outlining exactly how to obtain access to the area of interest, locate the laser in a static position, then be able to rotate and pan or tilt as needed to capture the full field of view. The requirements also determine the number of scans, how it will verify the data onsite and be sure it doesn’t come home without all the required information. The plan should also include contingencies based on experience and assessment of hazards and other potential challenges.

“The need for scan registration targets is also defined in the scan plan,” he said. “These are orientation identifiers used by the software to automatically align multiple scans into a 3-D shape. If there are likely to be few unique features in the object to be scanned, more targets are needed.”

In this instance the job was a diver-assisted operation. The diver placed and orientated the pre-fabricated jig onto the wellhead profile and lowered the laser instrument down into the bore. Connected to surface via standard subsea multiplexer and cable, the topside operator observed the images and controlled the operation of the laser, including the pan/tilt and rotation in real time. The diver moved the registration targets as requested by the topside operator.

“Although this operation did not require it, the presence of the subsea multiplexer means that additional instruments, such as weld inspection tools, could have been deployed if necessary,” he said. “The potential to perform an extensive dimensional and integrity assessment exists.

Software stitches all the scans together using the registration targets, and a 3-D model is then created from which measurements can be taken.”

Use of laser scanning subsea has many applications, in particular for detailed up-close sub-millimeter information. Laser scanning is a visual technique; the laser needs to see the area of interest through multiple scans at various angles to build the required scan. Whether topside or subsea, the laser instrument incorporates a real-time video feed so the operation can be controlled and managed in real time. This becomes critical when it comes to data quality control and onsite operations.

“It might be where there is high cost of intervention, high cost of failure, but where you need these precise measurements,” Lestrange continued, “or maybe even in the drilling environment where you’re looking at wear or storm damage and need to be assured of the integrity and need more confidence than can be gained from a visual technique.”

Another area of interest in the North Sea is decommissioning. “We have had several inquiries over the past 12 months because people need to know what’s the best way of approaching some of the decommissioning tasks—identifying the results of cuts, how effective the cuts were and how they're going to take things apart.” 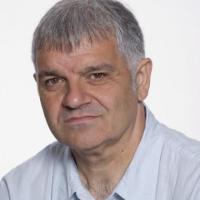