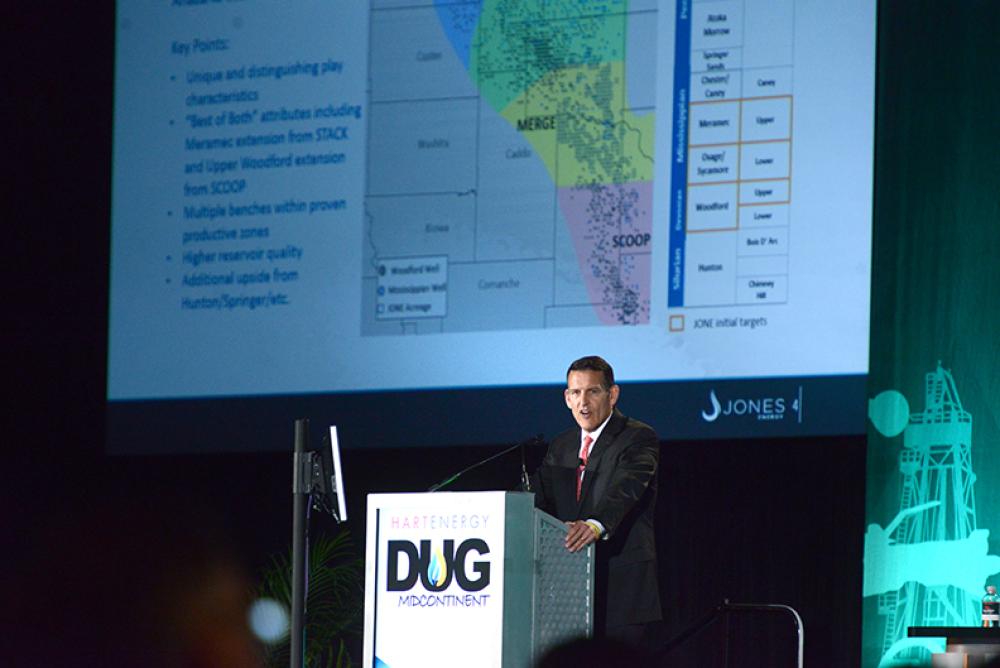 OKLAHOMA CITY—Activity in the Merge play in the Anadarko Basin is taking off and Jones Energy Inc. is all in. Chairman and CEO Jonny Jones says that for the Austin-based company, “2016 is the year of the Merge.”

Speaking at Hart Energy’s DUG Midcontinent Conference in Oklahoma City recently, Jones said, “The Merge play is developing rapidly, with 23 rigs running there, more than in the Scoop, so the industry obviously believes in the potential of the Woodford and Meramec in the Merge.

“We believe the Merge is unique and can be distinguished from other plays. The Woodford is the primary reason we got into the play. I believe we’ve only scratched the surface there.”

Jones Energy has pivoted from its longstanding operations in the Cleveland Sands in the western Anadarko Basin to a Merge focus. It entered Merge in 2016 by acquisition. It now has 21,000 net acres on 35 operated sections. “Our production is mostly out of the Cleveland, but going forward we are going to be a pure-play Merge operator. We just finished our first 10,000-foot lateral and we’ve tested five Meramec benches already.”

Jones said the Merge combines the best of both worlds. He defined it as being the Meramec extension from the Stack area to the north meeting the Upper Woodford formation extension from the Scoop to the south. It primarily encompasses southern Canadian and northern Grady counties.

“Merge Meramec is an extension of Stack but the net-to-gross pay is higher than in Stack. Only five Meramec wells have been drilled in the Merge.”

Multiple benches and high reservoir quality are the reason Jones has two rigs in the play, adding a third later this year. In addition, Jones said, Marathon Oil Corp. has four rigs running; Citizen Energy and Cimarex Energy Co. have three each, and Linn Energy Inc. and Newfield Exploration Co. have two each.

Jones said a lot of acreage trades among operators are taking place and they share information as well.

In the second quarter, Jones drilled its first two Meramec wells. The first, the Bomhoff 20-12-7 2H, reached a peak rate of 650 barrels of oil a day (bbl/d) and 6.3 million cubic feet a day (MMcf/d) from Upper Meramec. This well was among the top decile of wells drilled to date in the Merge, Jones said.

Jones’ first Woodford Generation 3 frack, the nearby Bomhoff 20-12-7 1H, was drilled from the same pad, and it achieved a peak rate of 278 Bbl/d and 3.6 MMcf/d. The company’s second Meramec well, the Garrett 4-11-6 1H, was drilled to an Upper Meramec target. It tested 672 Bbl/d and 1.58 MMcf/d and has exceeded oil rates of the best-in-class Bomhoff 2H well, the company said.

Next to the Bomhoff pad, Jones is drilling its first three-well pad, the Rosewood, with both Meramec and Woodford targets.

Gen 3 fracks, completion design, and optimization of the landing zones will be Jones’ operational focus this year and in 2018. Already Jones has reduced its drilling times to about 20 days, and the drill time for its last nine wells decreased by 30% over its first four wells, he said. If time is reduced by a day, that translates to savings of about $45,000 per well.

In the Merge Jones claims 1,100 gross locations in Meramec and about 1,800 in the Woodford, with another 300 or so in the conventional Hunton and Sycamore zones. He said 2019 will be full of spacing tests and he expected full scale development tol begin by 2020. “We are just getting started.”

“I think we can do at least 16 wells per section (that’s eight Upper Woodford, four Lower Meramec and four Upper Meramec), although some in the industry think they can do much more, up to 31 a section” Jones said.