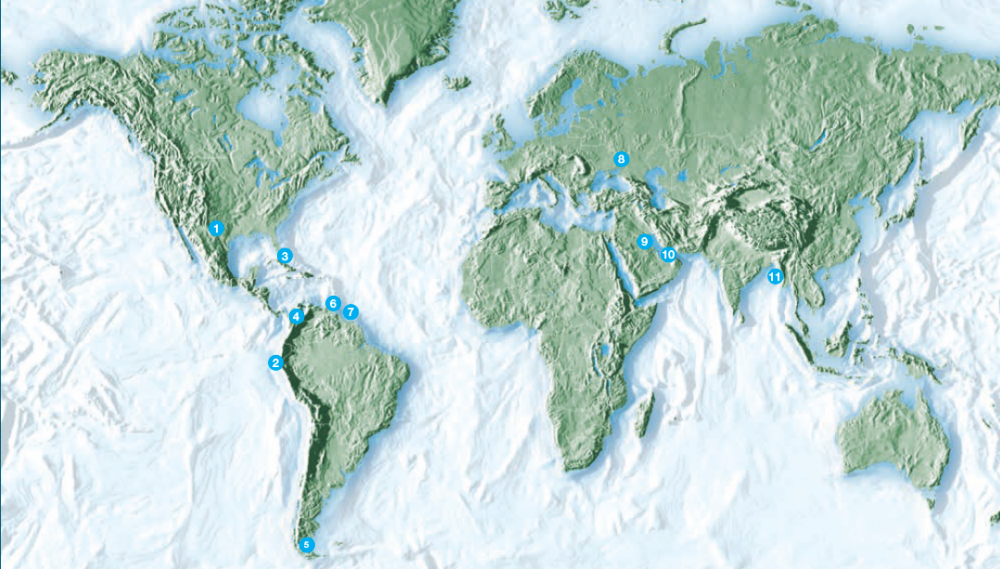 2. Peru
Karoon Energy is underway at the Marina-1 exploration well in Block Z-38 in the Tumbes Basin offshore Peru. The well has a planned depth of 3,000 m. Karoon is the operator and has a 40% net interest in Block Z-38. The Marina prospect has a gross prospective resource best estimate of 256 MMbbl of oil. The Marina prospect comprises a large fault-bounded structure with targets at multiple levels from 900 m to 3,000 m. The targets are in the Tertiary Pliocene La Cruz to Cardalitos formations.

3. Bahamas
An offshore Bahamas exploration well is planned by Bahamas Petroleum Co. at Perseverance-1. The well is targeting recoverable P50 oil resources of 77 MMbbl of oil with an upside of 1.44 Bbbl of oil in the B structure and a recoverable resource potential in excess of 2 Bbbl. The well location will be on the northern segment of the structure. Area water depth is about 510 m. It has a planned depth of 4,822 m with a Tertiary objective, but it will evaluate multiple reservoir horizons. The company anticipates that any discovery at this location has the potential to extend into a larger portion of the overall B structure extending to the southeast.

4. Colombia
Fronterra Resources announced a Lower Magdalena Valley discovery in Colombia in the VIM-1 Block. The La Belleza-1 exploration well was drilled to 11,680 ft and encountered 179 ft of potential hydrocarbon- bearing reservoir in Ciénaga De Oro. It was tested flowing 2,696 bbl of oil and 11.8 MMcf of gas per day with an average water cut of 10%. The initial shut-in wellhead pressure was 4,700 psi. The test was limited by the on-location facilities. Bottomhole flowing pressures were at about 6,000 psi. The partners, Fronterra and Parex, are evaluating options to drill additional delineation wells in 2020 from the existing La Belleza well pad. Parex began drilling another exploration well in the nearby Guama Block at Asai-1 and is targeting oil and gas in Porquero at about 12,000 ft.

5. Chile
GeoPark announced the discovery of a new gas field, Jauke Oeste, in the Fell Block in Chile. Exploration well Jauke Oeste 1 was drilled to 9,596 ft. A production test in Tobifera flowed 4.4 MMcf/d of gas with 52 bbl/d of condensate. The wellhead pressure was 3,141 psi. Additional production history is required to determine stabilized flow rates of the well and the extent of the reservoir. The Jauke and Jauke Oeste gas fields are part of the large Dicky geological structure in the Fell Block. Operator GeoPark is planning additional testing and exploration at Leun 1 well in the Flamenco Block, Huillin 1 well in the Isla Norte Block and Koo 1 well in the Campanario Block.

6. Trinidad
Touchstone Exploration announced test results at Cascadura-1ST1 on the Ortoire Block in Trinidad. The well had a peak flowback rate of 5,736 boe/d, including 30.2 MMcf of gas and 710 bbl of NGL. The first stage of testing was the lower-most 162 ft of a total of 777 ft of identified pay in Herrera. Analysis indicated liquids-rich gas with no H2S and no produced water. The well will be shut in for a two-week pressure buildup test, and completion and testing are planned on an additional 450 ft of identified pay. A sidetrack was drilled to 6,350 ft, and wireline logs and drilling samples indicated about 1,037 ft of prospective hydrocarbon pay in Cruse and Herrera at depths between 1,030 ft and 6,350 ft. It was tested on a 40/64-in. choke and the flowing pressure was 3,305 psi.

7. Guyana
Another Guyana discovery was announced by Exxon Mobil Corp. According to the company, the new find increases its estimated recoverable resource base in offshore Guyana to more than 8 Bboe. The new Uaru-1 well hit about 94 ft of high-quality oil-bearing sandstone reservoir. It was drilled in 6,342 ft of water and is about 10 miles northeast of the Liza Field. The Uaru-1 well adds about 2 Bboe to the previously estimated reserves on the block. A fifth drillship is expected to be deployed later in 2020.

8. Ukraine
Cub Energy is drilling the Makeevskoye-30 well in eastern Ukraine. The venture has a planned depth of 1,985 m and will evaluate several prospective horizons. According to the company, it will be the first well drilled in the producing Makeevskoye Field in over three years after recent successful recompletions on the Makeevskoye and Olgovskoye fields.

9. Neutral Zone
(Kuwait, Saudi Arabia)
Kuwait Petroleum and Aramco have decided to resume operations in the Khafji and Wafra fields in the Neutral Zone between Saudi Arabia and Kuwait. A territorial dispute halted oil production in the offshore Khafji Field and onshore Wafra Field. According to Kuwait Petroleum, production from the fields is about 280,000 to 300,000 bbl/d at Khafji and 220,000 bbl/d at Wafra, which both produce heavy, high-sulfur crude. U.S. sanctions on Iran and Venezuela have tightened the supply heavy crude. The shutdown began in 2014 at Khafji Field due to a dispute over their territorial rights then expanded to include Wafra in 2015.

10. United Arab Emirates
A gas and condensate discovery was announced by Eni in the Mahani exploration prospect located onshore in the Area B Concession of Sharjah (United Arab Emirates). The Mahani-1 well was drilled to 14,597 ft and encountered a thick gas-bearing limestone reservoir in the Lower Cretaceous Thamama. The well was tested with flow rates up to 50 MMcf/d of gas and associated condensate. Additional appraisal drilling is planned. The new phase of exploration will be targeting complex sub-thrust Jurassic and Cretaceous plays of the Arabian carbonate platform in the inner thrust zone of the Oman fold belt.

11. Myanmar
Posco International announced a new offshore gas field in Myanmar near the Shwe gas fi eld development in the  Andaman Sea, Bay of Bengal, in Block A-1. The Mahar-1 discovery was made while carrying out exploratory undersea drilling for its Mahar gas project. An 18-m gas column was encountered, and it is estimated that it could produce 38 MMcf/d of gas. The completion is in 2,598 m of water. Posco plans to drill more appraisal wells at the site in 2021. The Shwe gas field consists of blocks A1 and A3. There are two existing gas fields, Shwe and Shwe Phyu, in Block A1.

2022-05-16 - White Rock Oil & Gas retained PetroDivest Advisors for the sale of the Welch Unit waterflood properties in the northern Midland Basin of the Permian Basin in Dawson and Terry counties, Texas.