We live in a world increasingly defined and characterized by the acquisition, processing and use of data. Most of these data streams are designed to address a specific question or need, like heart rate on a fitness tracker, the temperature history recorded on a home’s thermostat and more. However, data are tricky in that often the same data can be reused to address multiple questions or needs. But first, one has to ask the right questions.

Take the data recovered from LWD and/or MWD tool suites. These tools were designed to offer insights into where the well is located and characterize the geologic media (rock and pore-filling media) surrounding the well. These datapoints provide valuable insights into the formation and serve as a subsurface GPS for operators as their bits explore and venture tens of thousands of feet below the surface.

However, if refocused, these highly sensitive LWD/MWD instruments also can detect nontarget materials like drilling fluid in the wellbore. The physical properties of this fluid are well-characterized by the driller. Significant changes to these physical properties caused by the mixing of formation fluids could indicate that formation fluid influx, or “kick,” has occurred downhole.

Current kick detection methods introduce risk and additional instrumentation (and increased cost) to the process. Early realtime kick detection methods— especially while drilling—are needed for multiple reasons, with safety being the most important. Early detection minimizes the kick influx volumes received by the well, making it easier to suppress while reducing the stress on the well construction and machinery used to suppress the kick and minimizing rig downtime.

At the Ocean Energy Safety Institute’s Public Technology Assessment Program forum in February of this year Exprosoft presented a report on lossof- well-control events that occurred globally between 2000 and 2014. For the given drilling scenarios (e.g., deep zone drilling, workover and completions), late kick detection was routinely cited among the chief causes for loss-of-well-control events occurring.

Also among the key findings, Exprosoft showed that exploration drilling had the highest probability of a loss-of-well-control event occurring and that the annulus was the most vulnerable pathway for fluid flow to occur during a loss-of-well-control event. These findings helped to form the basis for the conclusion that early kick detection is a key factor for maintaining well control. Perhaps most importantly, the findings underscore the continuing need for improving kick detection, especially kick detection while drilling.

Conventional kick detection methods suffer from a lack of overlap between detection certainty and low expense. One of the popular kick detection methods relies on monitoring the drilling fluid mass balance to act as an indicator that a kick has occurred. Most subsurface drilling operations rely on drilling fluid returns to the rig floor to identify when a well being drilled for hydrocarbons or other subsurface purposes is taking on a kick from the surrounding strata. By the time the drilling fluid carrying the kick material (formation fluids, oil, gas or water) has reached the rig floor, the ability of the driller to mitigate potential impacts of the kick is limited.

In an effort to improve kick detection reliability while reducing the cost of its implementation, researchers at the U.S. Dept. of Energy’s National Energy Technology Laboratory (NETL) have developed a novel kick detection method that uses the data from the physical instrumentation deployed in the wellbore as part of the LWD and/or MWD tool suites to determine if a formation fluid influx has occurred.

This method uses measurements from multiple physical instruments to reduce detection uncertainty. It is an early detection system for identifying changes in the intraborehole environment related to the invasion of fluids, water, gas or oil from the formation into the wellbore at or near the drillbit to provide close-to-neartime information on the wellbore environment in close to real time.

One of the method’s requirements is that the while-drilling tools must use some form of data telemetry to communicate to the surface. Data telemetry in the form of mudpulse, wired or electromagnetic telemetry enables data to be conveyed to the surface much faster than the formation fluids can travel in the wellbore.

This method takes these intrawellbore data signals and uses a suite of filters and algorithms to monitor in real time wellbore conditions near the bit. If a kick happens, the data change. And before the physical kick material makes its way to the surface, information can be provided to the driller minutes to hours earlier than conventional methods.

First-order modeling performed by NETL estimated as much as a 15-minute time advantage over the first signs of a kick on the rig floor. With such a time advantage the driller can take action before the kick has grown in intensity, making regaining well control easier and faster. Ultimately, the goal is to provide drillers and drilling operations with an early warning system before the kick ascends to the rig floor. 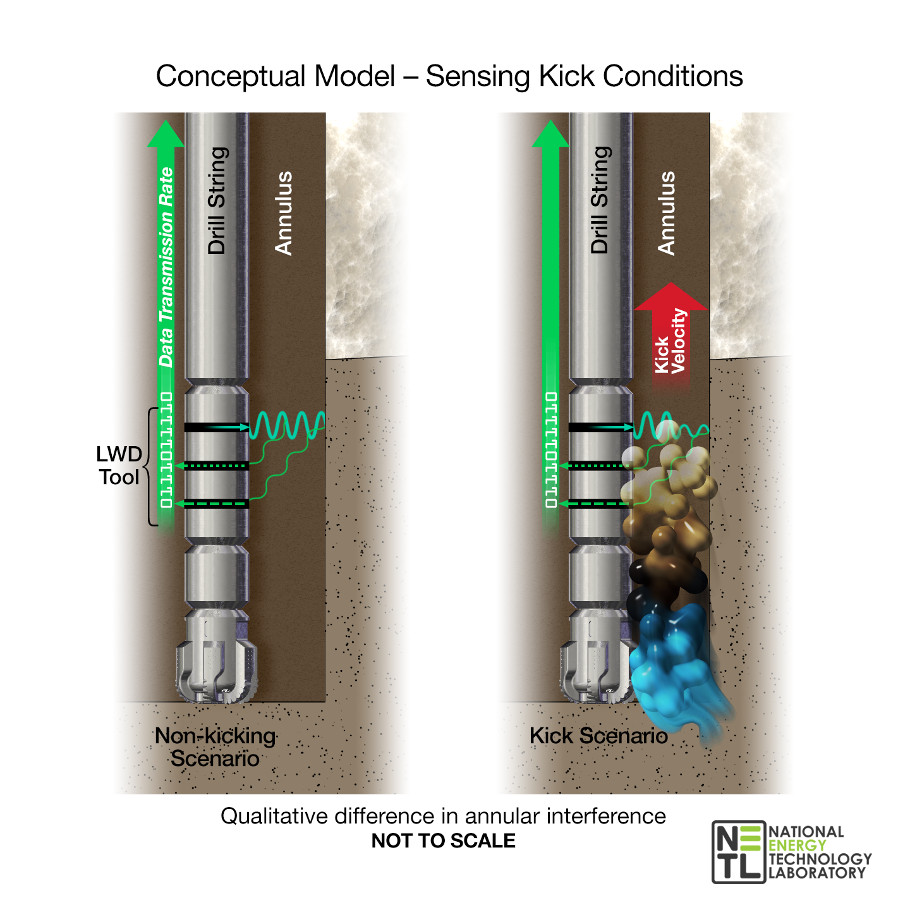 NETL is in the proof-of-concept phase for this technology. Computational modeling and experimental work are planned to determine essential parameters such as the formation fluid detection threshold and positive identification of specific formation fluids based on a unique combination of physical measurements. NETL also is in discussion with industry members who are interested in field-testing and validating this method. This method will be made commercially available if proven successful in the field.