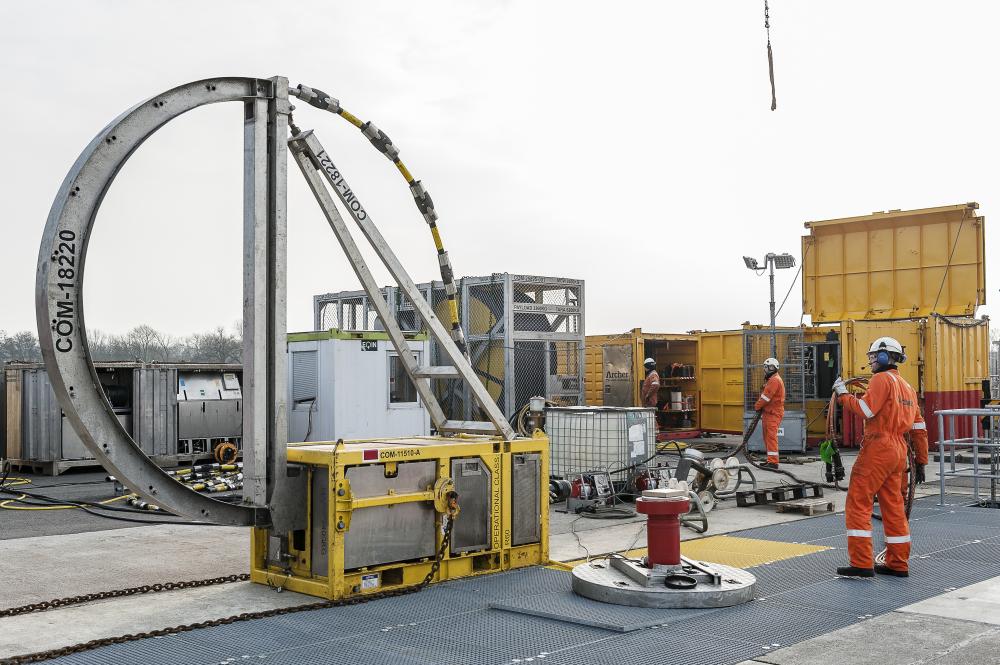 The complete ComTrac system, including crew, is prepared for rigup. (Source: Archer)

Archer is continuing to develop rigless intervention techniques with the ComTrac carbon composite rod system. The properties of the semi-stiff rod bring considerable benefits to the process of perforating both new and existing wells. Deployed in combination with downhole tractor devices, ComTrac has completed hundreds of meters of pay-zone perforations in horizontal wells.

When planning for effective perforating jobs, there is always a trade-off between the length of the perforating gun that can be run and the total number of runs to be made. Longer strings might be run on pipe by means of a rig, which is very expensive, while using electric wireline removes the need for a rig to be on location, but the length of gun is severely reduced due to the physical limitations of the wire.

The way that conventional braided wireline cable heads are built puts a limit on the shock loads that can be applied without risking failure, and this necessarily leads to a maximum weight of explosive that can be used. If the intervals to be perforated lie in the horizontal section of a well necessitating recourse to a downhole tractor, the effective payload on wireline can be reduced even further. The ComTrac rod is twice as strong as a conventional wireline cable for one-third of the weight in air which—when combined with the rod’s extremely low friction coefficient and its rigidity— means that even very large perforating strings can be successfully run.

Recent cases have highlighted the capability of the Com- Trac system to significantly reduce expenditure in both time and money. A horizontal well required re-perforating to maximize productivity, taking into account the well history and the possible movement of hydrocarbon contacts dues to depletion.

To determine the exact zones to be perforated, a saturation log was run over an extended interval of about 300 m (984 ft). With a logging speed of less than 0.6 m/min (2 ft/min), each pass takes hours to complete, and multiple passes had to be made because the saturation measurement relies on statistical significance.

The consistent movement conferred by the rigidity of the rod, allied to the precisely controlled logging speed possible with the fully electric ComTrac unit, meant the number of passes required for quality data was reduced, thereby saving more than 24 hours in operating time.

To shoot these zones using a tractor and conventional wireline cable would have only been possible by making four separate interventions. In the event the job was completed using the ComTrac system in only two runs, it would effectively cut the time taken in half. More than 30 m (98 ft) of guns were fired in a single run and there was no detectable damage of any kind to the rod. Having proved the system to be capable of conveying large perforating guns, and surviving the ballistic shock on detonation, the potential for even larger interventions becomes not just possible but highly probable.

The limiting factor for this job was not the ComTrac rod or the tractor, but the rigup height available to safely enter the well under pressure. Proprietary modeling software designed specifically to describe the ComTrac rod behavior was used to establish the envelope for future perforating operations.

All aspects of the bottomhole assemblies were taken into account to predict the largest possible gun strings that could be conveyed into a planned new well. Without limiting the string by rigup length available, the modeling exercise showed that extremely long and heavy strings could be successfully deployed to the target depth.

Having proved this was possible, thoughts turned to not just saving time by reducing runs but to the absolute performance of the perforation. If a perforation is made underbalanced (essentially where the reservoir pressure exceeds the wellbore pressure immediately prior to detonation), then near-wellbore damage to the formation is minimized, making cleanup far easier and ultimately increasing productivity.

A drawback to shooting perforations underbalanced is that there will be a pressure surge from formation to wellbore when the charges fire. With wireline cable in general, and especially for horizontal perforation operations, there is a very serious risk of the guns being blown up in the hole. This can lead to serious issues, especially if the flexible wireline cable becomes knotted or parted. An occurrence such as this will almost certainly result in the string becoming stuck in hole and ending up in an expensive fishing job, which might be even further complicated by having a nest of cable at the top of the fish. Because the ComTrac rod is rigid, the risk of getting blown up in the hole is vastly reduced. This means that shooting underbalanced, with all the obvious advantages associated with it, becomes far less of a risk. 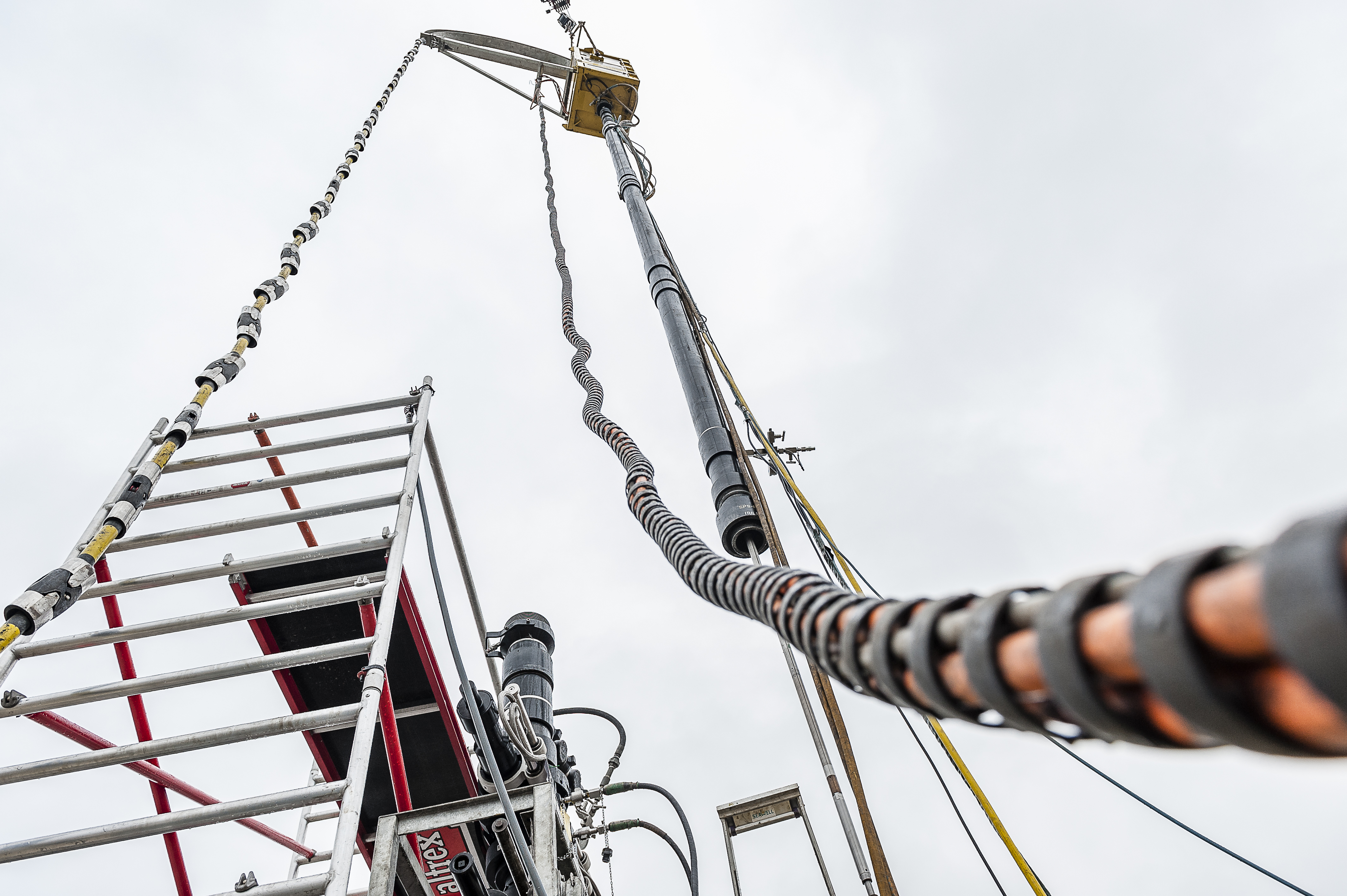 Another aspect of reservoir performance related to perforation is the orientation of the perforating charges with respect to the formation. Controlling the placement of charges can be achieved by the use of charge carriers designed for the installation of the shaped charge explosives in specific arrangements. If the gun is then oriented in a specific direction in the well, then the direction of each shot may be controlled. In a horizontal hole, this may be done by the use of off-center weights that hang down toward the low side of the hole. These weights are very heavy and have traditionally been used only for tubing-conveyed perforating carried out with a rig because conventional wireline is not strong enough. The properties of the ComTrac system mean that oriented perforation becomes possible, even without an expensive rig in attendance.

Following the extensive modeling exercise, it was predicted that a full string of 140 m (460 ft) length weighing in at 7,275 lb could be conveyed to the target depth. To take full advantage of this, the completion was designed with a deep-set lubricator valve installed to allow rigging in and out of the well under pressure without recourse to a deployment bar solution. In all, more than 400 m (1,312 ft) of pay zone was perforated (with the first zone fired significantly underbalanced) in only five runs in hole along an 830-m (2,723-ft) horizontal section with a maximum angle of 92 degrees. The longest string included the tractor, correlation tools for positive depth control, release devices, shock absorbers, swivels, three sets of orienting weights and 15 6-m (20-ft) guns with a total perforated interval of 105 m (344 ft) from top to bottom shot.

As a comparison, had this job been planned and executed using conventional techniques, the number of runs would have been at least 18. The ComTrac system has a growing track record of maximizing reservoir productivity while reducing expenditure of time and money and minimizing risk exposure. 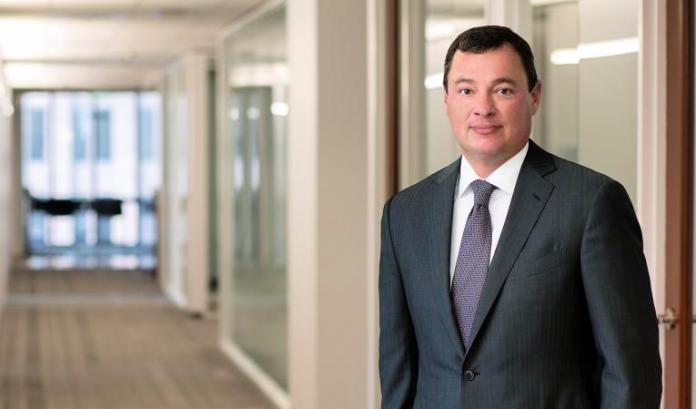