Shale oil resources have become a key contributor to oil production in North America. Due to the micropermeability of these reservoirs and rapid depletion of pore pressure proximal to the fractures and wellbore, the oil production for most wells declines sharply after a short period of production and the hydrocarbon recovery from these wells is low, typically 3% to 12% of original oil in place.

The development of effective EOR techniques is necessary to produce the significant amount of the remaining oil. Conventional secondary recovery processes, such as water injection, are ineffective in unconventional reservoirs because of the low injectivity and poor sweep efficiency in these formations. Consequently, the injection of gas, with a much lower viscosity, has received most of the attention. Several operating companies have performed pilot studies for EOR from shale oils using CO2 or produced gas injection. For instance, EOG Resources disclosed oil recovery improvement of 30% to 70% from the Eagle Ford Shale wells by injecting natural gas using huff-and-puff techniques.

Gas huff and puff refers to the cyclic process by which gas is injected into a reservoir to achieve miscibility with the oil. The mixture is then produced from the same well after a period of soaking (well shut-in) time. One single gas huff-and-puff cycle consists of three stages: injection, soaking and production.

The effectiveness of the gas EOR process in shale oils is dictated, at its foundation, by the diffusion process on the nanoscale, where gas molecules travel through the matrix pore structure to combine with the oil. Advection at this scale is very difficult, as the movements of the gas and oil molecules are primarily dictated by the diffusion process.

Diffusion is temperature-dependent and driven by concentration and pressure gradients along the path traveled. As the gas moves into the matrix pore structure, it combines with the oil through miscibility or solubility. The mixture has lower viscosity and swells, pushing the oil from the pore space to the adjacent microfracture or macrofracture, and draining to the wellbore.

Diffusion physics also drives the movement of the oil/ solvent mixture through the matrix pore throats based on the oil/solvent solution concentration gradient. In the huff-and-puff process, the soak time allows the diffusion process to permeate gas deeper into the matrix and the oil/solvent solution from the matrix. Reducing the wellbore pressure during production increases the swelling of the oil and enhances the back-production effectiveness.

The autonomous inflow control device (AICD) is an active flow control tool that provides an additional restriction to unwanted fluids, such as water or gas, and creates the additional restriction without any connection to or remote actuation from the surface and without any intervention by the operator. When used in a horizontal well, segmented into multiple compartments, an AICD completion prevents excessive production of gas after breakthrough occurs in one or more compartments. Tendeka has employed more than 25,000 AICD FloSure rate-controlled production (RCP) valves in more than 135 wells worldwide.

The effective distribution of the injected gas in long horizontal wells and the ability to keep the gas in the reservoir to maintain energy can greatly affect the recovery efficiency that can be achieved with EOR. Advanced completions utilizing appropriately designed inflow control devices (ICDs) and AICDs can enhance the performance of these huff-and-puff gas EOR schemes.

The completion is composed of an internal liner that subdivides the wellbore into multiple segments using swell packers. Each packer is positioned to compartmentalize either individual fractures or clusters of fractures.

Within each segment of the liner, the number and size of the ICDs and AICDs are determined to control both gas injection and oil and gas production at prescribed rates under the expected operating conditions.

ICDs are used in each compartment to balance the distribution of gas injection along the length of the wellbore by appropriate sizing of the nozzle in the ICD, combined with a check-valve mechanism allowing flow in only the injection direction. AICDs in each compartment restrict the early back-production of gas. The FloSure RCP-type AICD also has check-valve properties allowing flow in only the production direction. 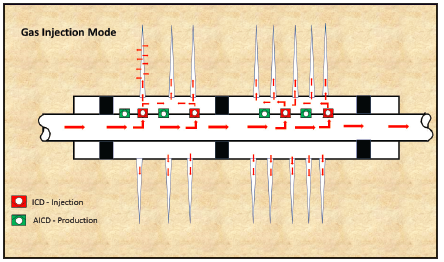 The well is then shut in for a period to allow the gas to diffuse into the oil in the pore spaces of the formation and for the oil/solvent solution to diffuse back into the microfracture labyrinth.

After a predetermined soak period, the well is placed on production. Gas and oil are produced from the reservoir rock into the microfractures and induced fractures before flowing into to the wellbore. With a conventional completion, injected gas flowing back during the production phase of the huff-andpuff cycle is preferentially produced because of the favorable mobility of the gas. However, in an advanced completion, produced fluids pass into the production conduit through the AICDs (Figure 2). 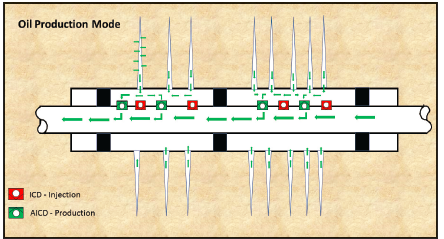 The AICD provides greater flow restriction to gas than to oil, and as such, compartments containing fractures dominated by the oil phase are produced with a minimum restriction, while compartments containing fractures dominated by produced gas are subjected to a very high-pressure drop. This maintains high pressures in those zones where the gas has not had enough time to effectively react with the interstitial oil while maximizing oil production from high oil phase zones. In this manner, excess gas is retained in the reservoir to further diffuse and react with the oil, and to maintain reservoir energy and pressure to improve oil recovery. With the AICDs added to the completion, the length of the soak period can be shortened, and the effectiveness of the gas injected can be improved.

The cycle of injection and production is repeated multiple times to maximize the recovery of liquid hydrocarbons from the reservoir.

The implementation of advanced completions in EOR applications has been studied by reservoir and well performance simulation. The study has demonstrated how advanced completion technology can be used to balance the distribution of gas injection along the length of the wellbore. It can, therefore, help control the early back-production of gas in a huff-and-puff gas EOR process for unconventional oil recovery.

The production curtailment was smaller than EQT's last reduction of about 1.4 Bcfe/d of gross production on May 16 as demand destruction from the coronavirus cut prices for the fuel to a near 25-year low.