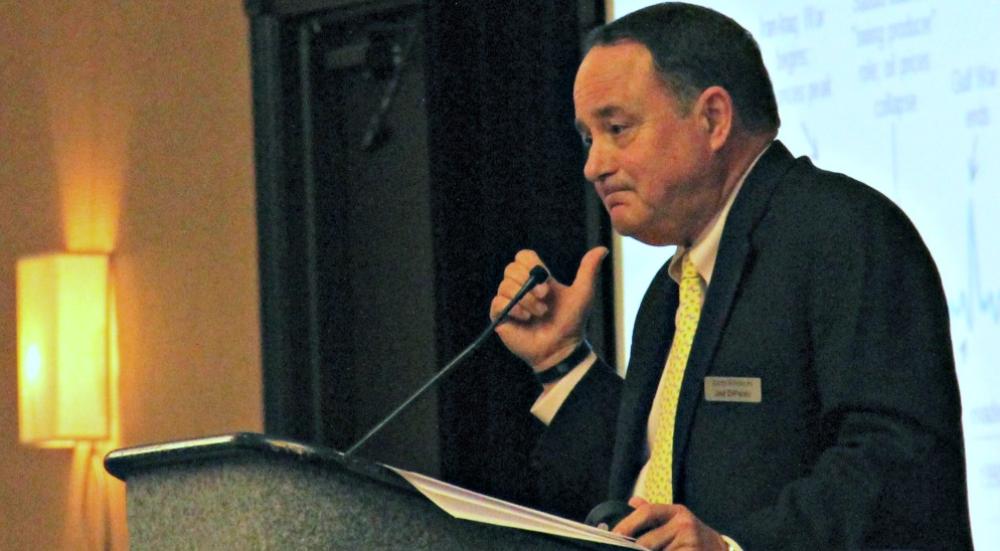 Industry veteran Jed DiPaolo, senior advisor to Duff & Phelps, warns that the downturn could be a three-to-four-year issue—and much tougher than anticipated.

HOUSTON—Industry veteran Jed DiPaolo, senior advisor to Duff & Phelps, locked his audience with a grim stare and underscored the down in downturn:

“This may be a three- to four-year issue. Make sure you have liquidity to 2018,” he advised the crowd at Duff & Phelps’ 7th Annual Private Capital Conference in Houston. “You may just have to go to ’17, but I’m telling you—’15 and ’16—if you’ve got a balance sheet that is struggling, you need to do everything you can to get it repaired. And do it now because rates are low. If you can rework your deals, do it. As we get into the late ’15 and ’16, it’s going to be a lot harder to repair that balance sheet.

“Make sure you’re as conservative as you can be for as long as you can be and you’re going to make it through this, but don’t expect it to end at the end of the year.”

The crowd’s stunned silence may have reflected discomfort with a forecast harsher than the consensus, at least so far in the oil price slump. But DiPaolo’s outlook, despite his blunt delivery, may not be that far from the mainstream approach.

John Kneiss, Washington-based director, government policy and legislative affairs for Stratas Advisors, a Hart Energy company, agreed with DiPaolo’s projection that the low price environment will likely persist for one to four years.

“It’s going to take a while for the overall global economy to grow sufficiently to take up the overhang on crude oil output. This should keep prices generally depressed, at least compared to recent markets of $100-plus,” he said.

And Jim Rebello, Houston-based managing director and energy lead, mergers and acquisitions for Duff & Phelps, provided this outlook for 2015: “Prices are probably choppy, but really, focus on hunkering down, prepare for the worst and hope for the best, and be aware that it will likely be a two-year window before what people would perceive as a full recovery. Most supply-oriented downturns typically take longer than a year, and right now, there is no reason to believe this will be any different than any other downturn from a timing standpoint.”

The approach to follow may depend on whether an investor accepts that energy commodity prices are exclusively driven by the laws of supply and demand. DiPaolo does not. A former senior executive at Halliburton, he spent years working for Dick Cheney when the former U.S. vice president ran that company. DiPaolo thinks oil is also influenced by geopolitics.

“We’ve had two major recent financial downturns. You see it after 9/11 and you see it again in 2008-2009,” DiPaolo said. “Both were devastating, but they were short-lived because they were financial. These weren’t geopolitically influenced.

“When the Saudis dropped the price of oil back in ’85, look how long it took for the price of oil to really come back again to that same level—almost 15 years,” he said. “Geopolitical things are longer term. It just doesn’t happen like these financial rebounds.”

DiPaolo drew parallels between the current price downturn and Saudi Arabia’s actions in 1985.

“We are starting to see a bifurcation in OPEC into the ‘haves’ and ‘have-nots,’” he said. “If this is a prolonged geopolitical price war over market share, I question whether OPEC survives as we know it today.”

DiPaolo identified the “haves” as Kuwait, the Gulf States of UAE, Oman, and Qatar, and Saudi Arabia. How much power can they wield? He noted that Saudi Arabia alone may possess more than 2 million barrels per day (bbl/d) of excess capacity. Unleashing that much crude on the world market would drag prices down even further.

Two significant political issues in Washington were referenced by DiPaolo:

“Supply/demand does still operate, and the new variable in the equation is the North America production,” he said. “Although the Saudis may be trying to depress North American output, from what I gather, considerable volume of North American production is still profitable below the $50/bbl [and probably well into the low $40s].”

Kneiss noted that North American production already influences global supply and pricing, including the Brent international benchmark price. And he, along with Thomas Buonomo, a Washington-based Stratas Advisors research analyst, did not buy into DiPaolo’s concerns that a possible lifting of the U.S. crude oil export ban and a nuclear deal with Iran would further depress global prices.

If negotiations fail, the most viable sanctions legislation awaiting further action in Congress would likely force an additional 300,000 bbl/d of Iranian oil off the global market, according to a Stratas Advisors analysis.

“Iran and the U.S. have a long history of bad blood,” Buonomo said. “Iranian officials deeply resent U.S.-led efforts to discriminate against them in terms of recognition of their declared nuclear rights, seemingly failing to appreciate how their own rhetoric and behavior has contributed to their current economic predicament under the international sanctions regime.”