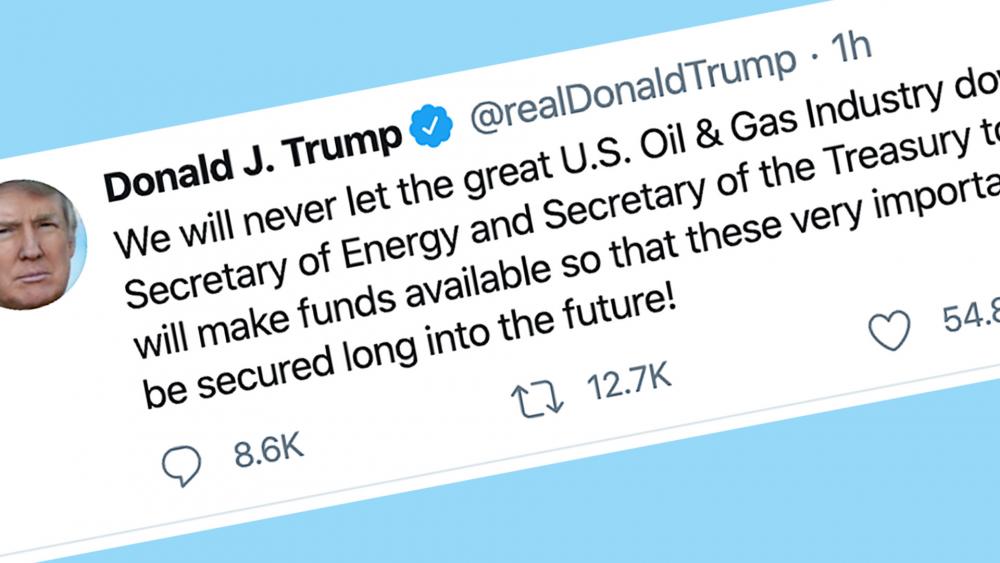 President Donald Trump’s directive to the heads of two federal departments to figure out a way to financially support the oil and gas industry raised questions about how it could be accomplished, as well as warnings about a backlash against the industry.

The president tweeted on April 21, promising funds to the ailing industry following an unprecedented collapse of the front-month price of WTI on April 20, in which it closed at –$37.63/bbl. As the May price tumbled, the June price remained fairly stable at around $20–$22/bbl, but on April 21, it took a 36% hit to $13/bbl by mid-afternoon. The international benchmark Brent price dropped 25% to fall below $20/bbl.

“We will never let the great U.S. Oil & Gas Industry down,” Trump tweeted. “I have instructed the Secretary of Energy and Secretary of the Treasury to formulate a plan which will make funds available so that these very important companies and jobs will be secured long into the future!”

Trump also said he was considering a request from Republican lawmakers to cut off crude imports from Saudi Arabia, another action that raised eyebrows among international observers.

“If these unprecedented low prices continue, the U.S. shale industry will be calling for government support to avoid their debts dragging them under,” David Elmes, head of the Global Energy Research Network at Warwick Business School in the U.K., said in a statement before Trump’s tweet.

“The accusation that this is a price war supported by foreign states will offer a tempting opportunity for protectionism when the shale industry is really a self-inflicted debt bubble caused by rapid growth in U.S. production,” he said.

How it Could Happen

Energy Secretary Dan Brouillette and Treasury Secretary Steve Mnuchin are already working on a plan to provide larger loans to mid-tier energy companies, as well as encouraging regulators and financial institutions to provide credit to drillers. The previous stimulus bill failed to provide funds to purchase oil for the Strategic Petroleum Reserve (SPR).

John Kneiss, a veteran energy policy analyst, cited royalty-in-kind as an option to give producers support. Because oversupply is driving the price collapse, this program would allow producers to provide oil for the SPR in lieu of paying royalties to the government. This would only apply to production on federal lands.

“Many of these domestic independent producers are very highly indebted and leveraged,” Kneiss told HartEnergy.com. “I’m sure with the price collapse many are at risk. Some arguments could be made, particularly by conventional economists, that market-driven consolidations should be allowed to take place, but in this case, the market was unduly impacted by an extraordinary outside—biological—event. So, is some level of bailout warranted? Maybe so but I think considerable resistance will occur.”

Federal funding of oil and gas companies in an election year would appear to be a heavy lift. Any program would invite scrutiny, particularly after funds in the first stimulus bill earmarked for small businesses found their way to several larger companies.

“Is it a good idea? I guess it depends on who you ask,” Kneiss said. “If it would protect your job and company, then I suppose it is. If funds go to pay private-equity investors and owners, then probably not.”

There is also the question of impact. Kneiss said that even if the Department of Energy could reallocate funds to purchase crude for the SPR, it would only provide very short-term relief and do little to improve the overall market condition. The combination of the pandemic, a weakening global economy and oil glut presents challenges that are perhaps too profound for any limited funding effort.

The president’s hands are also tied, to some extent, by the nature of a market-based economy.

“The Defense Production Act could allow him to direct production of some essential product,” Kneiss said, “but it certainly doesn’t allow a directive ‘not’ to produce something.”