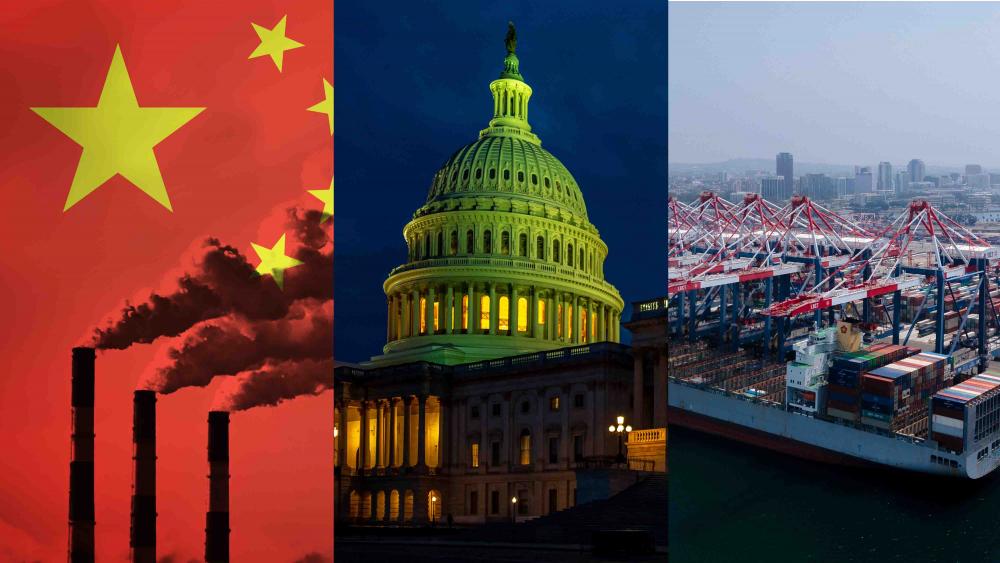 The U.S. should leverage its superior performance in reducing emissions to gain a competitive advantage in global trade, one that can be achieved through a border carbon adjustment, experts said in a recent webinar.

That advantage is profound, said Catrina Rorke, vice president for policy at the Climate Leadership Council and co-author of a 2020 report that analyzes the carbon intensity of economic production.

“On average, the global economy uses 80% more carbon emissions to create the same dollar of value as we do in the United States,” Rorke said during a recent webinar hosted by the Bipartisan Policy Center (BPC). “If you look at trade partners like China, India, Russia, we’re talking about three to four times the amount of carbon emissions to create the same exact goods.”

Even more significant is that the carbon advantage prevails across economic sectors, from raw goods through high-value finished products.

“Minerals to microchips,” she said, “the U.S. is better at producing goods with low-carbon intensity than our competitors.”

The data in the report supports the grievance expressed by executives for years about the unfair advantage enjoyed by foreign competitors.

“Most of the complaints I’ve heard from U.S. industry over the years has been around the fact, not so much that they don’t like complying with U.S. environmental rules, they don’t like having to comply and then having foreign competitors in their own market not have to comply,” said Maureen Hinman, co-founder and chairman of the Silverado Policy Accelerator and a former official in the office of the U.S. Trade Representative.

Fixing the problem involves choosing the right instrument, Hinman said, referring to options such as a carbon market, a value added tax (VAT) or an import licensing regime. The critical issue is ensuring the policy is effective and avoids unintended consequences.

In July, Sen. Chris Coons (D-Del.) and Rep. Scott Peters (D-Calif.) introduced legislation to establish a border carbon adjustment on carbon-intensive imports. The bill would account for the costs borne by U.S. businesses in complying with laws and regulations that limit greenhouse-gas emissions.

The measure would also:

“We want to create a global approach to addressing climate change,” Peters said during the webinar. “The U.S. only produces around 10% of global emissions. Most emissions growth is going to come from China and the developing world. This legislation, if coupled with a globally inclusive, carbon alliance, will help ensure that nations are incentivized to invest in clean technology.”

Peters also warned that not advancing on this front would play into rivals’ hands.

“We have to push back on the Chinese and the Russians and ensure that U.S. energy and technology is dominating the global energy landscape throughout the 21st century,” he said. “Whether we like it or not, incorporating climate into trade is going to be a part of these efforts.”

Peters expressed hope that the legislation could garner bipartisan support. The response from a Republican strategist on the webcast suggested this might be possible.

George David Banks, a BPC fellow and chief strategist for the Republican side of the House Select Committee on the Climate Crisis, noted that the GOP approach to climate has changed since the Kyoto Protocol in 1992. At that time, there was no end in sight for increased emissions. Now, Banks said, the U.S. is on a decarbonization pathway.

And while some Republicans want to renegotiate the Paris agreement, he said, that simply isn’t going to happen. “So, there’s only one way you can negotiate a new deal in a way that would force major emitters to reduce their emissions, and that’s through trade,” he noted.

Banks particularly liked the concept of a carbon club of like-minded countries whose emissions beat the global average. Another aspect of the Coons-Peters proposal he favored was the inclusion of fossil fuels in the mix.

“If you were to have a carbon club with the EU, there’s a big question there,” he said. “If it includes natural gas and we have really good effective measurement, particularly when it comes to methane, then what happens to Nord Stream 2 [the Russian natural gas pipeline]? Does it become uncompetitive or too costly at that point? Or does its competitiveness erode if U.S. LNG is that much cleaner, as folks claim it to be?”

A carbon border adjustment is not a simple solution. It would need to be crafted to avoid violating World Trade Organization (WTO) rules that prohibit members from discriminating against other WTO members. It would also be difficult to carry out, particularly regarding countries with multiple climate policies.

“I don’t know if we could get many Republicans today to say, ‘I support a border carbon adjustment,’” Banks admitted. “But I do think you could get a lot of Republicans to publicly say, ‘we like the idea of monetizing this carbon advantage that we have.’ If we structure the policy the right way, we’ll have Republican support.”