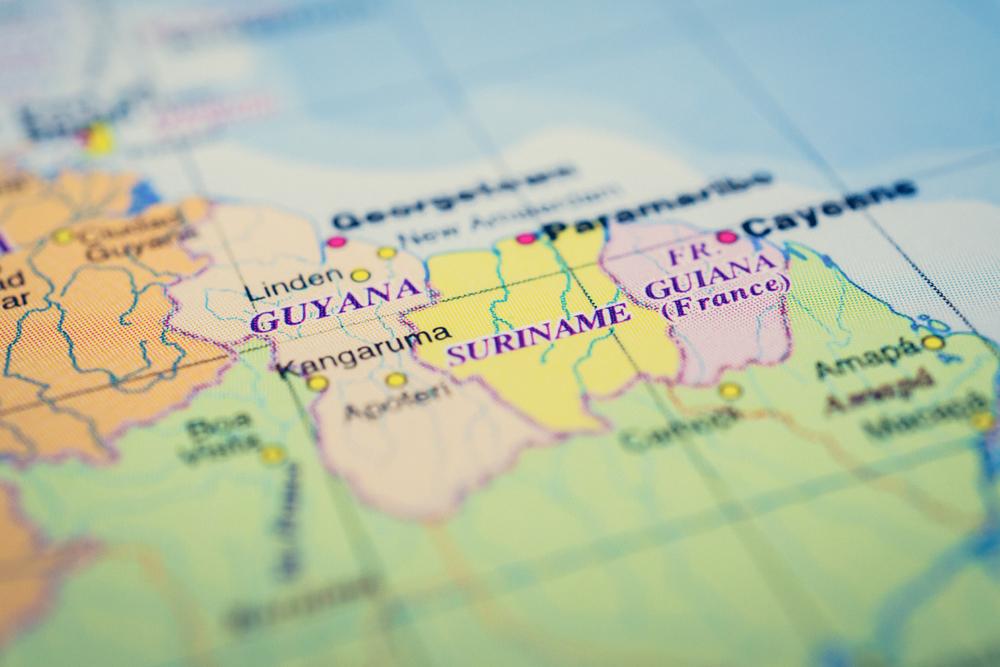 But the prolific Guyana Basin could have more to give.

“As I always say big fields get bigger and this should not be any different,” said Barbara Lowery-Yilmaz, senior vice president of exploration for Hess.

The company recently shared insight during its investor day on one of the oil and gas industry’s biggest exploration stories, giving details on the geology, economics, development plans and what the future could hold. Most of the discoveries on the 26,800-sq-km Stabroek Block, where Exxon Mobil is the operator, have been concentrated in the southern portion of the block. These include the Cretaceous opener, Liza, followed by Liza Deep, Payara, Snoek and Turbot.

Ranger, a discovery outside of the southeast area, was announced in January 2018 as a Carbonate play opener. Next came Pacora and Longtail followed by the Miocene play-opening Hammerhead. The most recent discovery, Pluma, was announced in early December and is located south of Turbot.

Exploration prospects are scattered across the block near existing discoveries and a large area south of the Ranger discovery. The Tilapia-1 prospect, which is about 5.5 km (3.4 miles) west of the Longtail-1 well, is up next for drilling by the Noble Tom Madden drillship. Other prospects in the Turbot area include Yellowtail and Tripletail. “Expect the resource to be drilled next year sometime,” Yilmaz said.

Hopes are that the prospects will add to the growing resource base.

“In addition, we will do additional work in the Pluma well that we’re on right now. … We’re drilling a sidetrack farther out and we’ll do a coring program,” she said. “So there’s a lot of activity to be conducted in 2019—both exploration and appraisal—in the southeast Turbot area.”

Then, there is the huge swath of acreage on the north and west side of the Stabroek Block, where no prospects or discoveries have been put on the map—yet.

“We are going to acquire 7,500 square miles of 3-D seismic data and over time we’re going to use that data to underpin a future portfolio and our understanding of the basin,” Yilmaz said. Existing data for other parts of the Stabroek Block will be reprocessed to “further refine and incorporate well results to continue to mature our prospect inventory that works underway.”

This work will come as Hess gears up to begin next year its first activities on Block 59 offshore Suriname where it is partnering with Equinor and Exxon Mobil. Here, plans are to acquire a 2-D seismic survey to help define play concepts before shooting 3-D.

“All of this will mature the inventory as we go forward well into the next decade,” Yilmaz said.

Hess also has positioned itself in the Kaieteur Block offshore Guyana and Block 42 offshore Suriname, where several prospects—including a large carbonate play called Walker—have been identified. Working with Chevron and Kosmos Energy as operator on the latter, plans are to begin drilling in late 2019 or early 2020.

While the acreage gives Hess plenty of running room, the existing discoveries have kept things busy.

Work progresses on development of Liza Phase 1, the play-opening discovery. Sanctioned in June 2017, Liza Phase 1 is expected to mark first oil by early 2020, producing up to 120,000 barrels per day (bbl/d) of oil from the Liza Destiny FPSO.

The larger Liza Phase 2 development will use a second FPSO designed to produce up to 220,000 bbl/d.

A third development, Payara, is also on the horizon. If sanctioned, a decision for which is expected next year, production could begin in 2023. The Payara Field is located about 12 miles northwest of Liza. 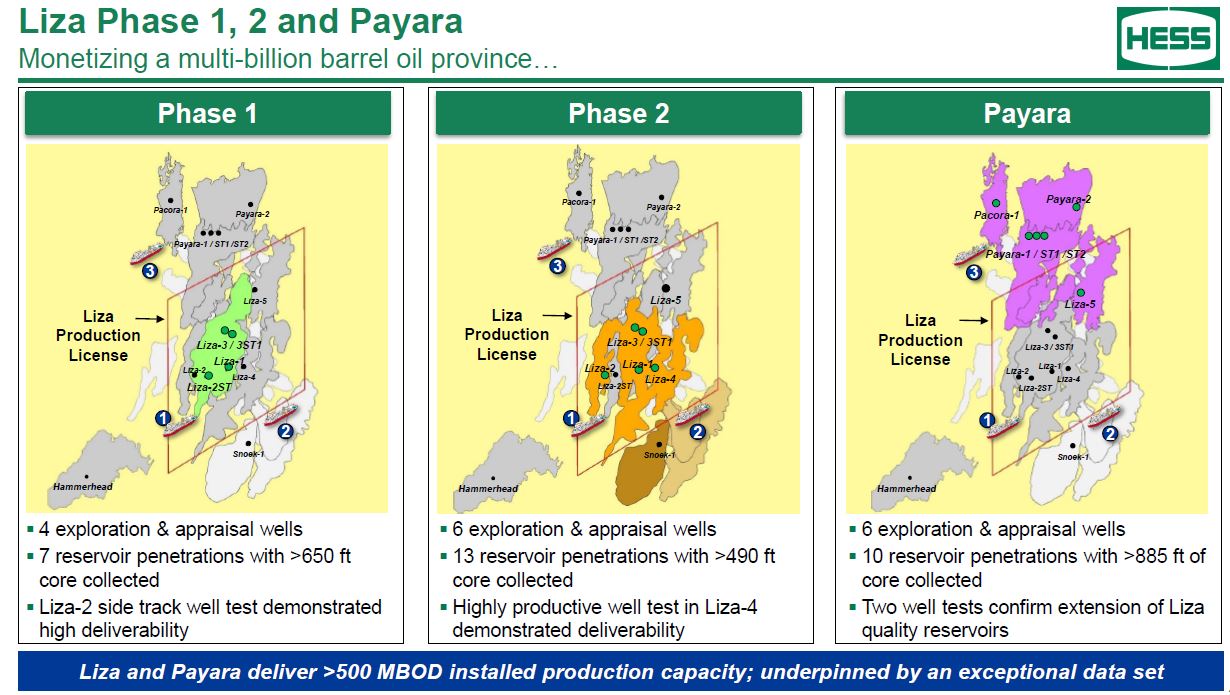 Longtail, Turbot, Pluma and Tilapia, if successful, could be jointly developed with a fourth FPSO, Hayum said in a statement following news of the 10th discovery.

“The giant, low breakeven discoveries are key to the partners,” he added. “At peak, the project accounts for a third of Hess’ future production. For ExxonMobil, Guyana strengthens its growing deepwater portfolio, while for CNOOC it addresses efforts to offset domestic declines.”

Liza Phase 1 has a breakeven cost of $35 per barrel (Brent) and Phase 2 has a breakeven of $25 per barrel, Richard Lynch, senior vice president of technology and services, told investors. Low rig rates, combined with the standardization approach of design one and build many, also lowers costs and improves schedule.

Drilling costs for development wells have also fallen as partners have gained knowledge. The average well cost has dropped from $85 million with Liza Phase 1 to $58 million for Liza Phase 2, according to Hess.

Having exceptional reservoir quality gives Hess “tremendous confidence that production rates will be there with these wells and that the ultimate oil recovery from these reservoirs will probably exceed our expectations.” He pointed out Liza’s sweet spot where there is “remarkable porosity and permeability.” 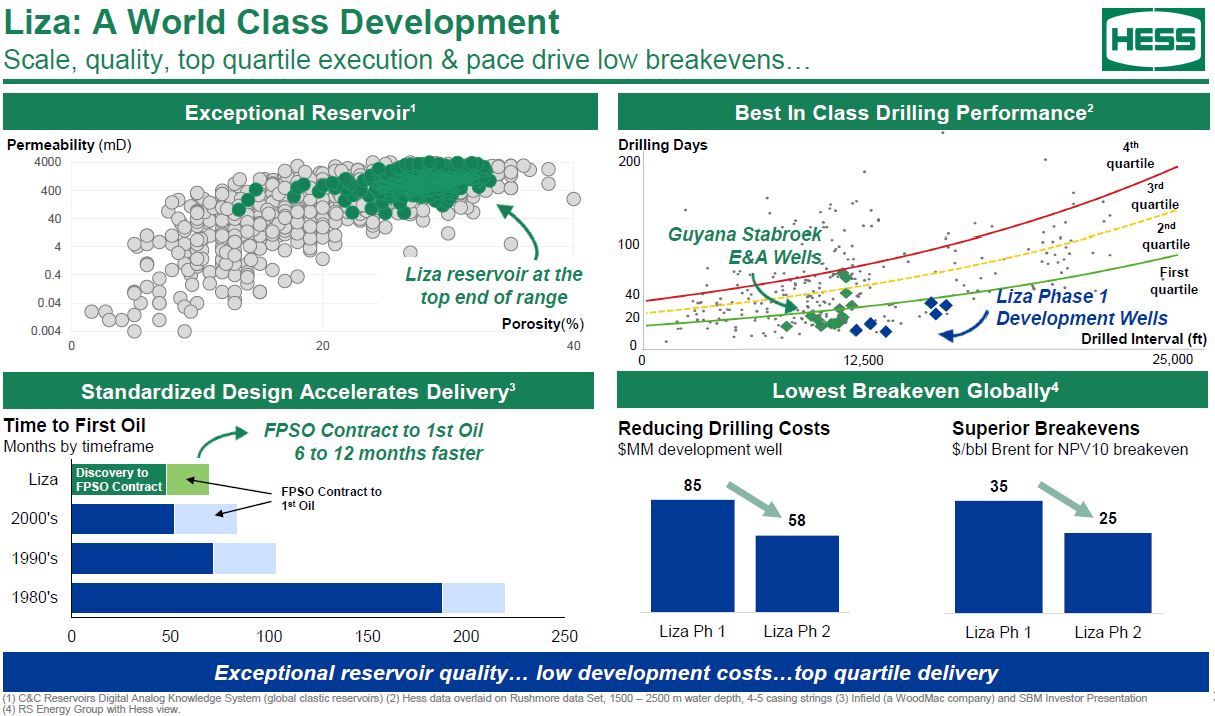 Infrastructure for the current developments—Liza Phase 1, Liza Phase 2 and Payara—are capable of producing more than 750,000 bbl/d, he said.

The Guyana developments are expected to be free cash flow positive in 2022.

2022-06-17 - The meeting will “discuss steps companies can take to increase refining capacity and output and reduce gas prices in the near-term,” an Energy Department spokesperson said.