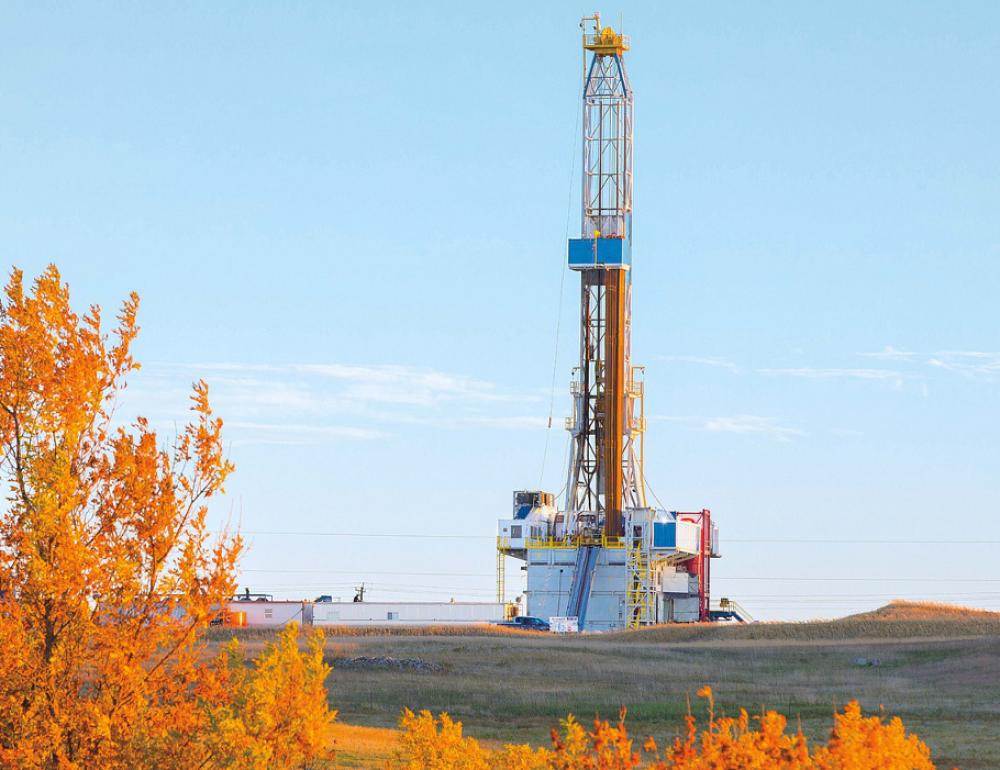 As Hess Corp. benefits from its 60-stage, 8.4 million pound proppant completion design in the Bakken shale play, the company is preparing to pump more, add a couple of rigs and another frack crew while conducting a study to determine optimum development methodology for each part of the basin.

Drilling 23 wells and bringing 13 new wells online with an average of four rigs, Hess increased production in the Bakken by 12% to 111,000 barrels of oil equivalent per day during first-quarter 2018. Plans are to add a third rig in the third quarter and a fourth rig in the fourth quarter. The company forecasts Bakken full-year production to average between 115,000 net barrels of oil equivalent per day (boe/d) and 120,000 boe/d, which would be up about 15% from the first quarter.

This comes as Hess continues to optimize its completion techniques in an effort to add value.

“This new limited entry technique allows us to more than double the number of distinct entry points in a 10,000-ft lateral while maintaining good fracture geometry control and should result in a further increase in initial production rates, estimated ultimate recovery and most importantly, net present value,” Hill said. “While we only have a small number of wells [seven] that have been on production for 90 days or more, we are increasing the number of plug and perf completions and plan to complete approximately 40 and bring online 25 of these wells in 2018.”

Now is the right time to assess how to take the assets forward, he said, referring to the study that will evaluate how to develop assets in different parts of the basin with closer looks at methods inside vs. outside the core and well spacing among other areas.

The Bakken remains one of the most prolific plays in the U.S. and for Hess, a global oil player with assets offshore Malaysia, Canada and Guyana as well as in the U.S. Gulf of Mexico (GoM), where full-year 2018 production is expected to average about 65,000 boe/d as production from the Stampede field ramps up and fields impacted by the Enchilada platform shutdown crank back up.

The U.S. Energy Information Administration reported earlier this month that Bakken oil production is expected to rise by about 15,000 bbl/d to about 1.22 MMbbl/d in May. The drilling productivity report was delivered April 16 as oil prices continued to rise, improving market conditions.

Rising oil prices, lower operating costs and falling depreciation, depletion and amortization (DD&A) helped Hess cut its net loss to $106 million in first-quarter 2018 compared to a net loss of $324 million a year earlier. Notable improvements were made in E&P, which shrank its loss to $25 million from a $233 million loss a year ago.

“We think Hess’s 1Q result will have a positive impact on the shares’ near-term performance,” Barclays said in a note April 25. “Clean earnings of ($0.27)/share were well ahead of our ($0.59) estimate and consensus of ($0.53). The stronger than expected results were driven by higher-than-expected price realization, sharply lower opex and DD&A (compared our estimate and the management’s previous guidance) and slightly higher production volumes.”

But Barclays described Hess’ cash flow from operations total as “relatively weak at $397 million before changes in operating assets and liabilities or ~$1.6 billion on an annualized basis under a $67 Brent and $63 WTI price environment, likely a disappointment for some investors.”

Hess CEO John Hess said the company continues to “make significant progress” on its strategy to grow its resource base, move down the cost curve and be cash generative at a $50 per barrel Brent oil price post 2020.

“Our strategy reflects our view that shale alone will not be enough to meet the world’s oil demand growth and offset base production declines,” Hess said. “For the past several years the industry has significantly underinvested in longer cycle projects which currently represent approximately 90% to 95% of global oil supply.”

Hess is focused offshore Guyana, where it holds a 30% interest in the ExxonMobil-operated Stabroek Block, and the Bakken—the company’s “growth engines.” Assets offshore Malaysia and deepwater GoM are considered “cash engines,” Hess said. “By investing in our highest return assets, divesting higher cost mature assets and implementing a $150 million annual cost reduction program we expect to lower our cash unit production costs 30% between 2017 and 2020 while reducing unit DD&A rates 35% over the same period.”

But the company doesn’t expect to generate positive cash flow offshore Guyana, where ExxonMobil has made seven discoveries, until about 2022. When Liza Phase 1 production comes online, expected by 2020, Guyana will still be at breakeven or perhaps a slight deficit, an executive said on the call. But when the larger Phase 2 comes online, assuming in mid-2022, Guyana will begin to generate significant free cash flow.

Meanwhile, exploration and appraisal work continues on the block.

“The Bakken is on a strong capital efficient growth trajectory and Guyana continues to get bigger and better,” Hess said.