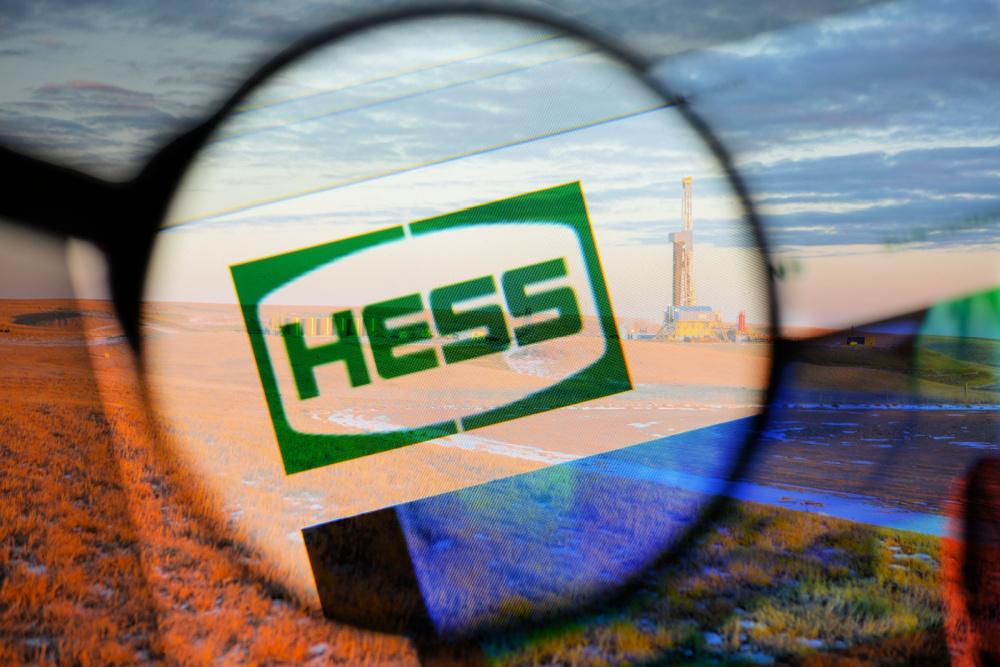 But even with higher prices, Hess warned that some production had come in lower than anticipated due to field declines and unplanned downtime, as well as severe weather. The company also said it was facing rising costs for materials. (Source: Hart Energy; Hess logo by Hess Logo Casimiro PT / Shutterstock.com)

U.S. oil and gas producer Hess Corp. on April 27 topped Wall Street estimates for first-quarter profit as oil prices surged, but warned of rising costs and a production hit due to weather-related issues in the Bakken.

Oil prices hit multiyear records during the quarter as the conflict in Ukraine led to sanctions against Russia, one of the biggest exporters of crude, creating a global supply crunch. Brent oil futures were trading over $104/bbl on April 27 and have risen about 36% this year.

But even with higher prices, Hess warned that some production had come in lower than anticipated due to field declines and unplanned downtime, as well as severe weather. The company also said it was facing rising costs for materials.

“Like our competitors, were also seeing upward cost pressure across both onshore and offshore businesses,” CEO John Hess told analysts in a webcast.

Excluding Libya, the company said net production fell about 12% to 276,000 boe/d in the quarter largely due to output declines and unplanned downtime in the Gulf of Mexico.

Hess also said its full-year net production would come in at the lower end of its 325,000 boe/d to 330,000 boe/d guidance due to weather-related issues in North Dakota, where severe winter storms have hampered production.

Shares were up more than 2% to $104 each in morning trading.

The company warned that inflation may require it to add $80 million to $100 million to its capital program during the year. It said drilling and completion costs in the Bakken have increased about 7% from last year to $6.2 million per well.

Hess said net income attributable to the company jumped 65% to $417 million, or $1.34 per share, in the three months ended March 31, from last year.

Excluding items, Hess earned $1.30 per share, above average analysts’ estimate of $1.13 per share, according to Refinitiv IBES.

Hess, along with partners Exxon Mobil Corp. and CNOOC Ltd., said on April 26 it has found oil in three new wells off the coast of the South American country of Guyana, raising recoverable oil and gas potential from its discoveries to nearly 11 billion barrels.

2022-04-14 - Analysts said the industry must drill new wells going forward because the number of DUCs available was dropping fast. That drilling increase was likely already coming, at least in the nation’s biggest oil shale basin, the Permian Basin.

2022-04-14 - Shell, TotalEnergies and 3R Petroleum were three of 13 companies that won contracts in an April 13 auction for 59 exploratory blocks of oil and natural gas in Brazil.

2022-04-14 - After a pandemic-induced hiatus, oil production is expected to hit new highs, particularly in the Permian Basin, in the wake of the Russian invasion of Ukraine.