Almost three years ago Dockwise of the Netherlands gave a presentation at the Offshore Technology Conference (OTC) in Houston, where it unveiled designs for a striking vessel it was in the latter stages of completing—the Dockwise Vanguard.

The company said that the giant semisubmersible would simply be able to sink itself beneath, raise itself up, lift and then transport substantially larger offshore structures than had been possible before to wherever they were needed. It would be, they said, a true game changer.

A lot of bold claims are heard at shows such as OTC, but this one has been more than fulfilled. Dockwise is still talking it up, labeling the biggest vessel in its fleet as “117,000 metric tons of possibility.”

It was conceived to handle the growing size of offshore facilities often needing transport halfway around the world, especially with the vast majority being built in the Far East. Many routinely weigh well beyond 50,000 mt.

The Vanguard was a major step up in terms of heavy transport capability, having a 50% larger lifting capacity and 70% greater deck area than the previous largest ship, the Blue Marlin—another Dockwise vessel.

One of the most striking aspects of the Vanguard’s design is the lack of a bow, allowing facilities such as an FPSO vessel to overhang beyond both the bow and stern. The vessel—built at a cost of about $240 million—was designed with the aim of maximizing cargo space and features repositionable casings that give it greater flexibility in terms of its carrying options. Shipbuilding engineering agency DeltaMarin of Finland designed the Vanguard.

Since its arrival onto the market in 2013, it has been demonstrating exactly what it is capable of. The vessel can sail at 12.5 knots to 14 knots from the Far East shipyards to the Gulf of Mexico, for example, in about 50 days. That distance would previously have taken around 120 days in a wet tow. Such a reduction in sailing time has many benefits, but the most obvious one, perhaps, is that it enables fields to be brought onstream and begin earning revenue much earlier than previously possible.

The vessel’s first job was to transport Chevron’s Jack-St Malo platform hull from South Korea to the Kiewit yard in the U.S., while it also has moved rigs including the Noble Paul Romano and Ocean Patriot.

Its latest contract saw it transport Eni’s Goliat circular platform (with fully integrated topsides) from South Korea to Norway—at 64,000 mt, 112 m (367 ft) in diameter and 75 m (246 ft) high, it is the largest cargo carried by the Vanguard so far.

Next on the list is the transport of the former BP Schiehallion FPSO vessel (now the Armada Intrepid) from Rotterdam in the Netherlands to the Far East. 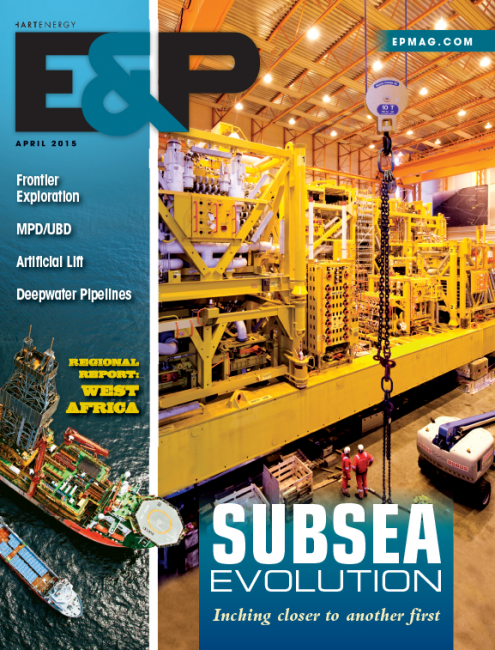