Gravity and magnetic methods are an essential part of oil exploration. They do not replace seismic. Rather, they add to it. Despite being comparatively low-resolution, they have some very big advantages.

These geophysical methods passively measure natural variations in the earth’s gravity and magnetic fields over a map area and then try to relate these variations to geologic features in the subsurface. Lacking a controlled source, such surveys are usually environmentally unobjectionable.

At a comparatively low cost, airborne potential field surveys can provide coverage of large areas. Allowing quick regional coverage, even gravity urveys can now be recorded from an aircraft with airly high reliability.

In Canada, digital regional gravity and magnetic data are available at zero cost from federal government agencies. Local and detailed surveys are acquired by exploration companies.

Because many college programs tend to overemphasize seismic as almost the only geophysical tool for oil exploration, other methods are sometimes overlooked by explorationists and managers. Where useful gravity and magnetic data are disregarded, risk reduction is incomplete, and the results of exploration programs are less reliable.

Density is scalar, but magnetization is a vector total of a vast and commonly unpredictable variety of remanent and induced magnetizations. Unlike density, magnetization can depend on very slight variations in the occurrence and distribution of particular minerals, which may have little relation to the overall lithology.

The gravity field is simple, unipolar and almost perfectly vertical. The geomagnetic field is complicated: It has two or more poles, and it is commonly strongly nonvertical. Besides, it changes all the time, necessitating frequent updates by government agencies.

Gravity lows (negative anomalies) occur where rocks in the subsurface have a comparatively low density, which reduces their downward gravitational pull. Where the rock density is relatively high, the gravitational pull is increased, and a gravity high (positive anomaly) occurs.

Magnetic anomalies are more complex because the magnetic field and rock magnetization are both complicated. With a nonvertical dipolar field, a single rock-made anomaly source can be deceptively associated with a pair of apparent anomalies: a high and a low side by side.

Gravity and magnetic surveys should be designed purposefully to resolve the specific kind of anomalies that are expected from geologic targets of interest in a particular study.

Gravity and magnetic surveys should be designed purposefully to resolve the specific kind of anomalies that are expected from geologic targets of interest in a particular study. If a survey is too tight, money is wasted on redundant coverage. If a survey is too sparse, the desirable anomalies are undersampled and not delineated sufficiently. The idea is to design the sparsest and smallest, hence cheapest, survey that would resolve all the expected desirable anomalies.

Examples of exploration use

In the platformal Phanerozoic Alberta and Williston basins, most big magnetic and gravity anomalies are associated with ductile structures and rock composition variations in the crystalline basement inherited from orogenic events in the Precambrian. Such ductile ancient structures were fairly seldom reactivated, and they had relatively little influence on the Phanerozoic basins above.

More important are the later brittle basement faults and fractures, whose offset can be as little as a few meters, sometimes below seismic resolution.

Such brittle faults had a variety of direct and indirect influences on many intervals in the Phanerozoic sedimentary cover. They are commonly associated with subtle gravity and magnetic lineaments, some of which cut across the regional pattern of major anomalies. To help delineate fault networks, researchers created a regional gravity and magnetic atlas of the southern and central part of the Alberta Basin.

A gravity or magnetic lineament can be a gradient zone, linear break in the anomaly pattern, straight anomaly or even an alignment of separate local anomalies. Long lineaments are more likely to be associated with faults than short ones, especially if they occur in swarms or are a part of a regional pattern.

The best data processing methods are simple and intuitive.

The best data processing methods are simple and intuitive so that derivative maps and anomalies are easy to relate to their precursors in the raw data. 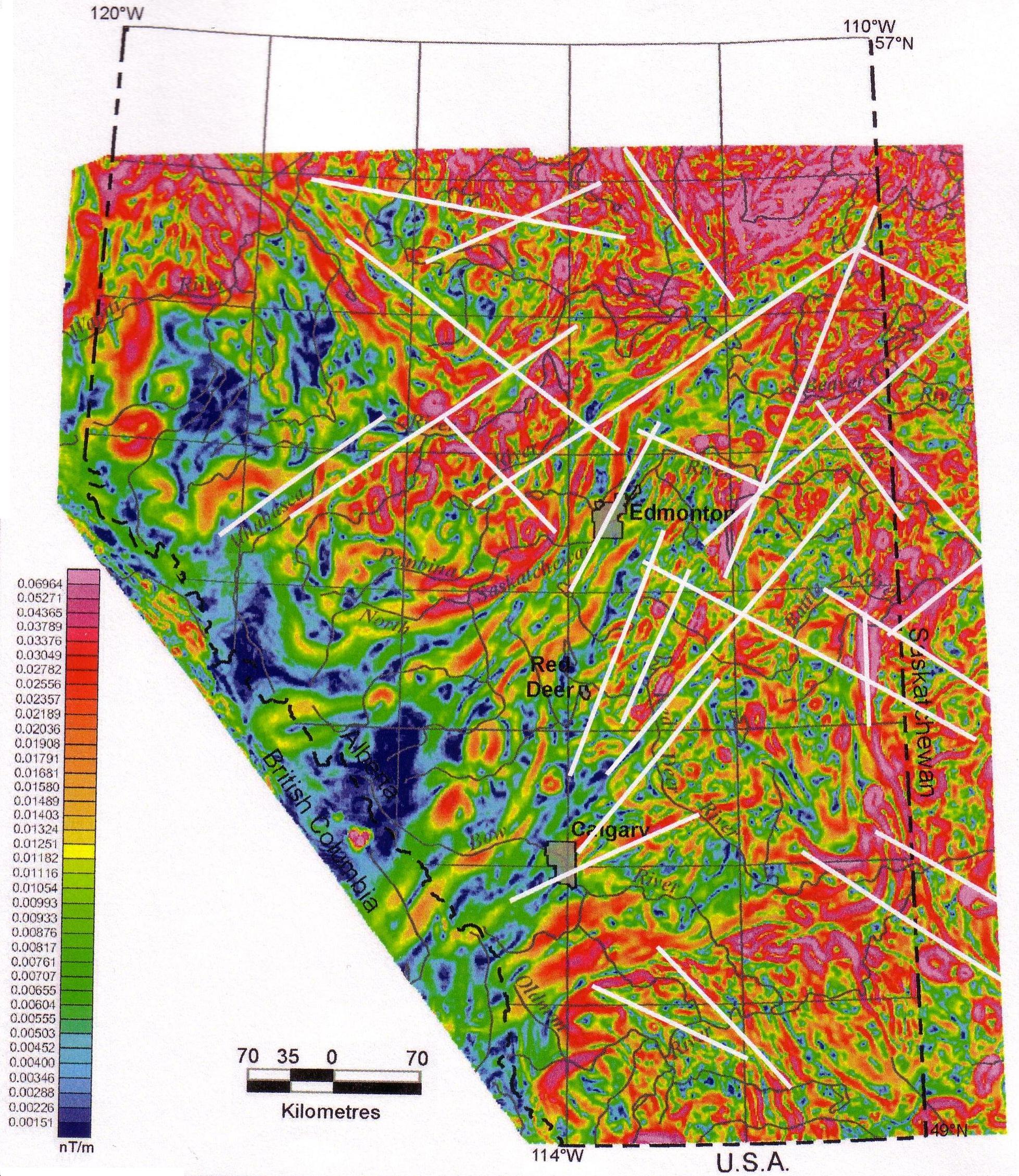 To help identify faults, gravity and magnetic lineaments should be compared with topographic and drainage lineaments. Seismic data and geological studies can help to determine if suspected faults had an influence on any particular play interval.

In horst and graben basins such as the offshore Queen Charlotte Basin on the west coast of British Columbia, the first step is to examine geological information from the surrounding areas on land and from drillholes in the basin. The pattern of raised and lowered crustal blocks in and around the basin can be determined from geologic field mapping and from a combination of seismic and gravity data.

Magnetic data (Figure 2) in the Queen Charlotte Basin were used to further delineate the networks of local and regional faults. Seismic data in this basin suffer from an uneven maximum depth of signal penetration due to the presence of numerous volcanic stringers. On land and offshore magnetic data were instrumental in the delineation of extrusive and intrusive igneous rocks, which was crucial for understanding the patterns of organic maturation. 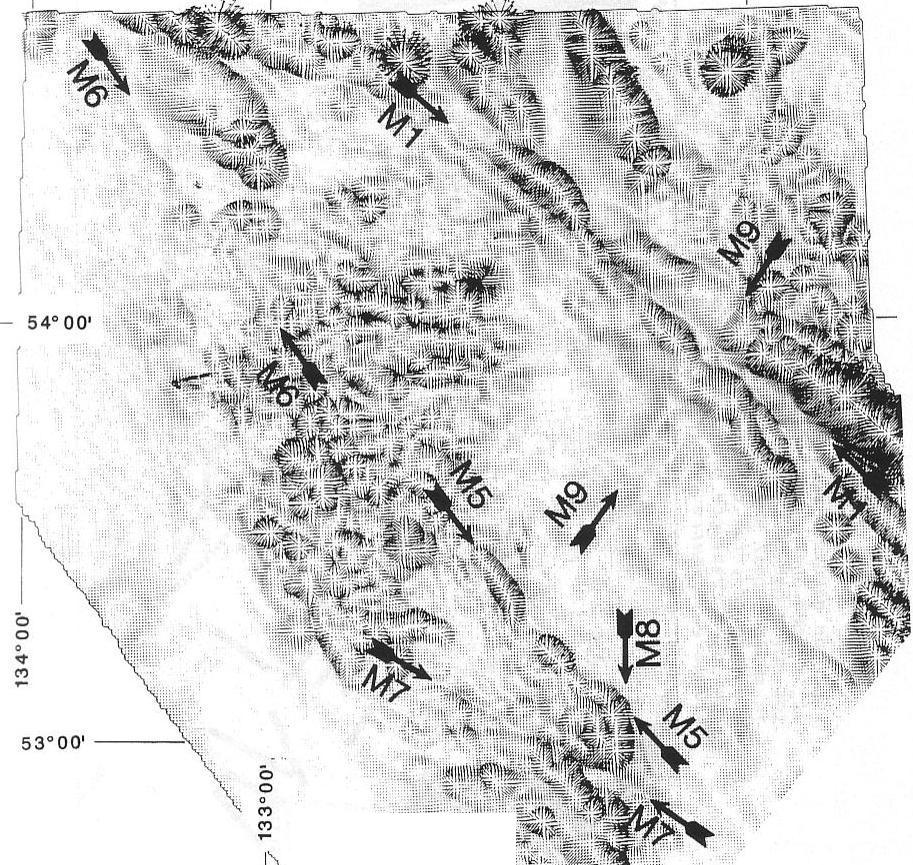 Teaching of gravity and magnetic methods

The relatively low priority given to potential-field methods in many oil-oriented college programs impoverishes students and their employers. Where gravity and magnetics courses exist, too often they focus—with intimidatingly advanced mathematics—on the physics of potential fields at the expense of exploration applications, survey design and methods of geological interpretation.

Too many gravity and magnetics textbooks are also very mathematical (with a superb exception of Nettleton, 1971). Too little tends to be said about the relationships between anomalies and variations in rock composition, which is the key to geological interpretation.

When geologists, seismologists and potential fields experts are too narrowly specialized, they do not talk to each other enough. The result is commonly disregard of valuable gravity and magnetic information. Alternatively, interpretations are too numerical to be useful if geological considerations are ignored.

Gravity and magnetics experts in oil exploration should talk less in an echo chamber among themselves. They should learn to think more like their clients, who tend to be geologists and seismologists. Their work should be presented from first principles, with minimum mathematics and with maximum geological consideration. Only then can interdisciplinary walls be brought down and exploration managers can vividly see the essential practical utility of gravity and magnetic methods.