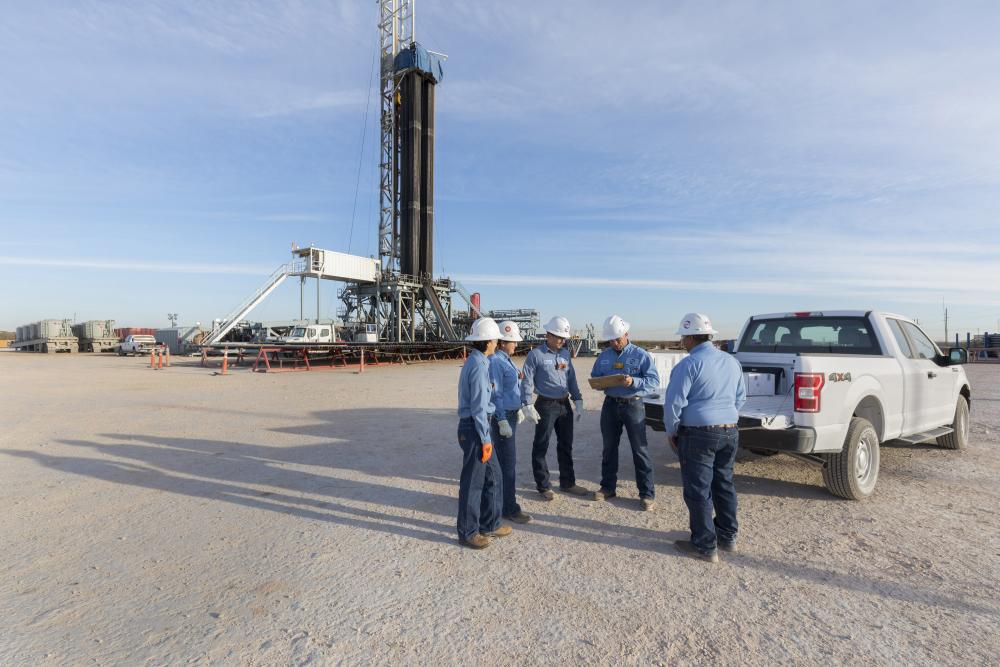 Faced with the challenge of getting the most out of its 18,000 producing wells worldwide, Occidental Petroleum (Oxy), the Permian Basin’s largest operator, relies heavily on a variety of artificial lift technologies and EOR mechanisms. Those efforts resulted in Oxy producing 639,000 boe/d through the second half of the year, according to the company’s second-quarter 2018 investor report. That amount is expected to reach as much as 664,000 boe/d by the end of the year, with more than half of that production (about 374,000 boe/d) coming from Oxy’s Permian Basin operations.

According to the company’s website, Oxy leverages artificial lift on about 90% of its producing wells. During a keynote presentation at ALCE, Walker said of those on artificial lift, more than half are on beam pump lift. Electric submersible pumps (ESP), progressive cavity pumps and gas lift also all play key roles in the production strategy Walker characterized as “evacuating the wellbore.”

Although beam pumps play the most significant role in Oxy’s artificial lift operations, gas-lift systems are an emerging production method for the company. Gas lift is used on about 7% of the company’s producing wells but accounts for 31% of Oxy’s barrels per day production.

Among the benefits gas lift brings to unconventional production, Walker said, is its ability to work well in sand and with wellbore deviation. He touched on the challenges of producing from ever-changing and complex horizontal wellbore construction designs and wells with gas-oil ratio (GOR) challenges.

“There is lots of discussion on gas,” he said. “Usually GOR is going to continue to increase in most of our unconventional resources.”

One of the solutions Oxy, along with many other operators, uses is downhole gas separators. Oxy applies downhole gas separators where natural gas production impacts the company’s ability to pump wells primarily using beam pumps and ESPs, which Walker said “do not like a lot of gas.” In particular, he pointed to a gas separator system that ties into the well tailpipe and dip tube to handle critical velocity issues.

“A lot of us know about critical velocities, and this is a way that we found can be helpful,” he said.

He also addressed what he perceived to be an industry issue of nonworking rod rotators.

“There are some [rod rotators] that are SCADA-monitored, so when they break and stop turning, you get contacted,” he said. “The industry uses [rod rotators] and should have a lot more. Most are monitored visually by operators to assure they are working.”

Walker also hinted at a potential future artificial lift strategy called Gas Assisted Liquid Lift Oscillating Pressure (GALLOP), which he said could be in use in the industry in the next 10 to 20 years. The GALLOP system is being developed at the Colorado School of Mines where laboratory work is being conducted with an eye toward future commercialization.

According to a study authored by Daniel Croce at the Colorado School of Mines, GALLOP “is designed to use a closed-loop intermittent gas-lift system to lift fluids from specific locations along the horizontal wellbore.”

Croce wrote that the GALLOP system is composed of a dual small inside diameter tube run along the entire well with check valves strategically located along the liquid-filled sections of the horizontal wellbore. Croce explained that as opposed to traditional plunger lift systems, GALLOP uses pressure pulses that are only experienced by the GALLOP piping, allowing the reservoir to be produced continuously.

“This allows the steady buildup of liquids and reduces the amount of injected gas and surface facilities required,” the study reported.

In addition to its gains in oil and gas production, this year Oxy has seen its Aventine maintenance and logistics hub in Carlsbad, N.M., become operational.

According to Oxy’s second-quarter 2018 investor report, the Aventine facility has delivered more than 2,700 rail cars of fracturing sand to Oxy’s Permian Basin operations, and 60% of the oil country tubular goods used in New Mexico were railed in through the facility.

During the company’s year-end 2017 investor call, Oxy CEO Vicki Hollub said Aventine would provide $500,000 to $750,000 in initial savings per well as well as improved time to market, last-mile and wellsite logistics. 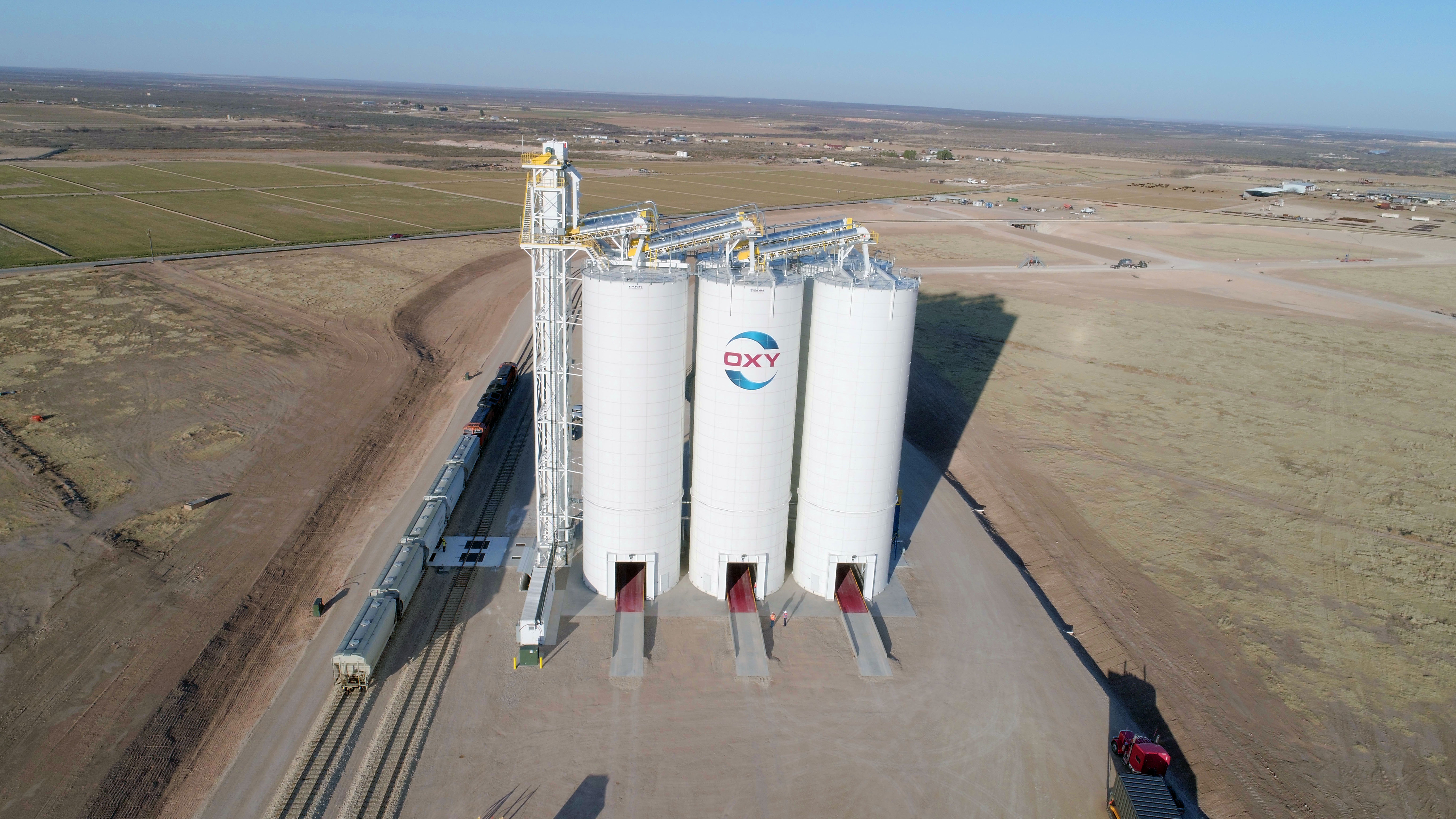 Oxy is one of the few companies conducting EOR practices in unconventional production. The operator injects more than 27 Bcm (950 Bcf) of CO2 for its EOR operations, according to the Oxy website. Oxy also has implemented four unconventional EOR pilots across the Midland and Delaware basins. The company estimates that its EOR operations increase ultimate recovery by 10% to 25% in the fields in which CO2 flooding is deployed.

Jody Elliott, senior vice president and president of domestic oil and gas for Oxy, said during the company’s second-quarter 2018 investor call that the acquisition is leading to cost savings in its Permian EOR operations.

“We continued our progress at the Seminole-San Andres unit by lowering opex an additional $2 per boe for a total reduction of $7 per boe since the acquisition,” he said. “This $7 improvement is expected to generate over $400 million in [net present value], which is twothirds of the acquisition cost.”

Elliott also said Oxy has initiated a feasibility study for a carbon capture utilization and storage project with White Energy. According to Elliott, the project will capture CO2 at White Energy’s ethanol facilities in Hereford and Plainview, Texas, and transport the CO2 to the Permian Basin for use in sequestration in Oxy’s Permian EOR business.

“Some of the incremental in our capital allocation is going to the Central Basin Platform and EOR to drill horizontal wells in conventional reservoirs,” she said. “So we’ll do some things to work on mitigating the decline of the Permian Resources business.”

Ken Dillon, senior vice president and president international oil and gas for Oxy, said one such project Oxy is working on is the Teca-Cocorna steamflood project in Colombia.

“So far, the pilot appraisal is performing above expectations, and it’s a classic Oxy International project implementing EOR techniques to an existing field discovered in 1963,” Dillon said. “We expect the green light before year-end and expect to reach about 30,000 barrels per day gross in Phase 1. Initial response shows wells going from six barrels a day to 58 barrels a day with the impact of the steamflood.”