Efforts to continuously improve operational efficiency and cost/unit hydrocarbon metrics are enabled by technology. Keane Group’s Engineering and Technology Center works with the company’s clients and field operations to drive both fracture effectiveness and production enhancement with products like ReLease. This product is designed to improve the performance and utilization of produced water for use as a fracturing fluid.

Keane Group has developed chemistry optimized for the particular characteristics and challenges of produced water. Produced water is typically bacteria- and scale-prone and more difficult to lower friction pressure losses than freshwater. However, the technology is rapidly evolving. Bacteria control, friction reduction, scaling control and viscosity-building chemistry technology now applies across the spectrum of produced waters found in most of the major oil-producing regions in the U.S.

Produced water is somewhat of a catch-all term that might encompass several distinct sources from flowback and produced water, which in turn might contain proportions of previously injected water, fracturing treatment chemicals, formation water and hydrocarbons. A large industry has emerged in recent years to provide recycling capability so that these waters might be reused, particularly in the typically water-stressed, arid regions where some of the U.S.’s largest oil fields are found (Figure 1). Bacterial control has been of particular concern when reservoirs produce H2S or reducing permeability as a result of inadequate bacteria control of sulfur-reducing bacteria, among others. 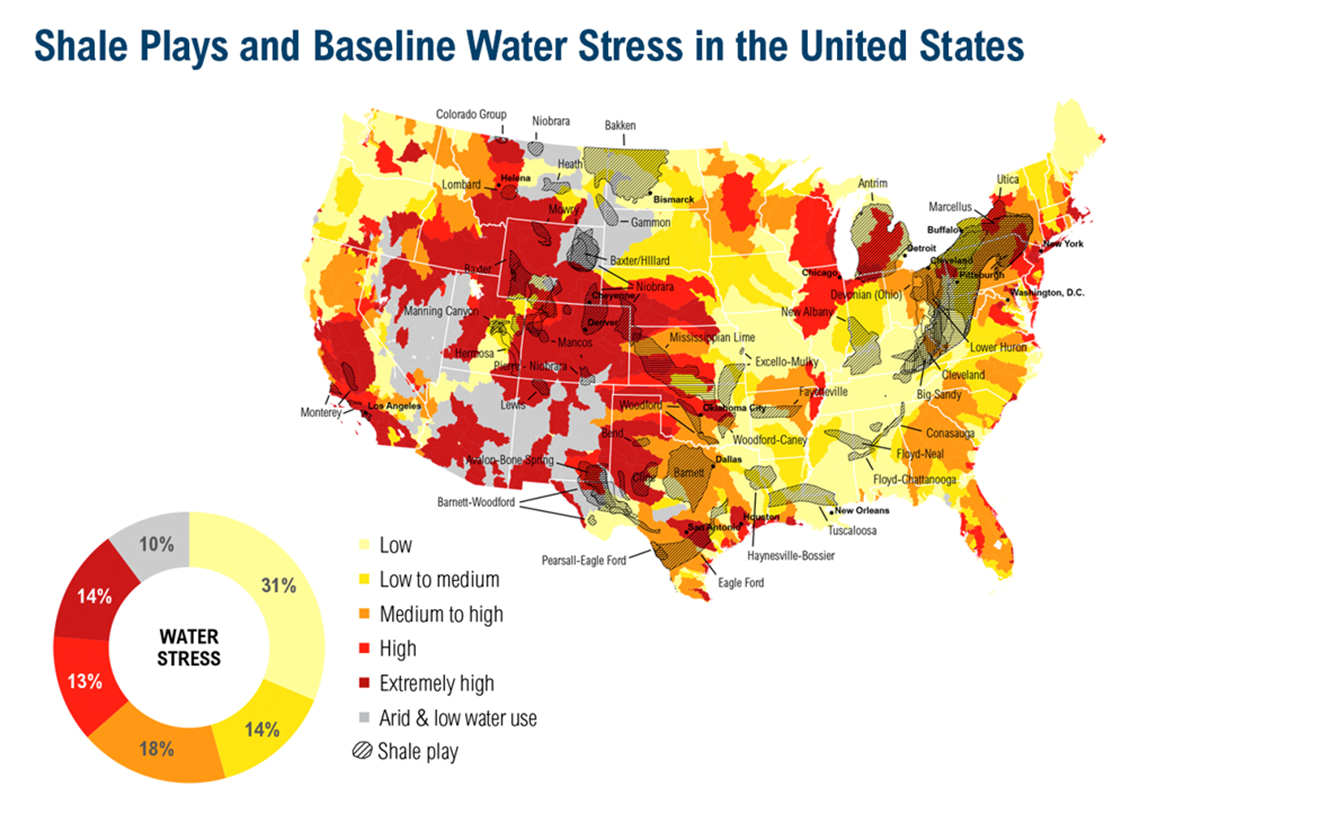 New technology for bacteria control in produced water includes principally oxidative treatments such as chlorine dioxide. While quite effective, it has been noted that high-residual oxidative elements pumped downhole can have severe negative impacts on high-pressure pumping fluid ends and iron, causing costly pitting and other wear failure items. A dual-treatment method utilizing chlorine dioxide with confirmed zero residuals, combined with traditional glut/quat bactericides or quaternary phosphonium biocides for long-term control, has been found to be the best overall solution for bacteria control in produced water.

The scaling trend when swinging the makeup of the pumping water from 100% brackish to 100% produced water is another issue translating into higher scale formation (Figure 2). It is well-known that scaling or precipitation of solids in the reservoir, near-wellbore region or at the perforations/inside the tubulars can be highly detrimental to well productivity as well as difficult, risky and expensive to remove. Prevention of scaling in produced water is the company’s objective in almost all cases. Depending upon the situation, it might be required to increase the concentration of scale inhibitor by a factor of two or three times to keep the residual of scale inhibitor with time in flowback and produced water to similar levels measured in wells completed with 100% brackish.

The biggest change in fracturing fluid chemistry in the last one to two years has involved the move from guar-thickened and low-friction pressure fluids to polyacrylamide- based high-viscosity friction reducer (HVFR) and low-friction pressure fluids. These HVFR fluids are typically operationally simpler to run, can be more effective at friction reduction than conventional friction reducers (FR) and exhibit lower sand settling velocities than their guar-based equivalent. However, they must be tailored more specifically to the total dissolvable solids (TDS) and specific chemistry of the production water in which they are utilized. The company has tested multiple chemistries with multiple blends of fresh/produced water to provide optimized chemistry and cost performance as well as optimized proppant suspension in various scenarios.

Once pipe friction pressure and proppant suspension performance is achieved, an often-overlooked item involves surfactant chemistry and relative permeability effects allowing hydrocarbon to be most effectively recovered following treatment. As noted, produced water varies greatly in composition and sourcing, particularly in areas such as the Permian Basin, where water is routinely recovered from different producing horizons and compounded. By optimizing surfactant chemistry, it can be ensured that despite the variation in composition, hydrocarbon recovery can be enhanced and production success odds greatly improved. Figure 3 shows the testing of various nano-surfactants in produced water blends to determine how much hydrocarbon is recovered in each case. By performing this testing in advance of completion operations, ultimate recovery is improved and questions about incompatible waters are addressed. 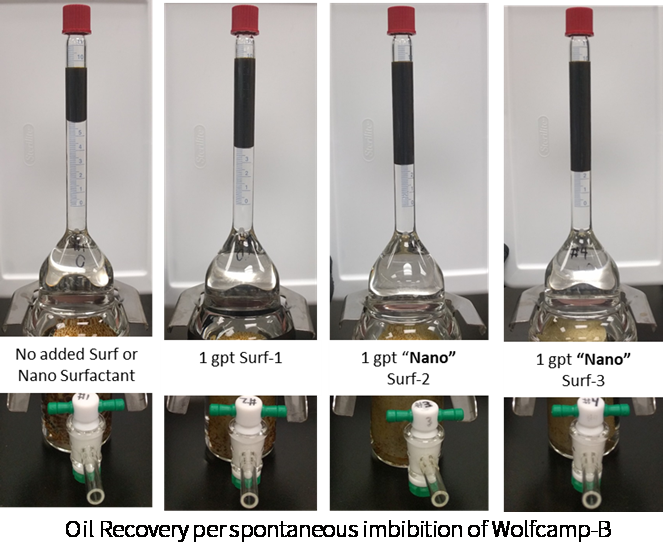 Breaker technology usage in these FR or HVFR produced water fluids is a key, and sometimes controversial, topic. Polyacrylamide molecules are typically very long-chain and difficult to break apart, which would seem to indicate they also could be plugging and potentially damaging to reservoirs.

However, at typical concentrations from 0.3 gal/Mgal up to approximately 6 gal/Mgal, a holistic approach should be used that takes into account polymer concentration, proppant loading, conductivity and reservoir pore-throat morphology.

The company’s typical recommendation is to run polymer-specific breakers, with the caveat being in cases where breaking the molecules apart might cause them to plug the formation face rather than flow back. This has been a similar concern with some of the surfactant technology where it has been hypothesized that lowering the interfacial tension substantially could cause greater imbibement of injected water into the formation face rather than flowing back. In these cases where uncertainty exists, core testing is recommended to determine the proper breaker strategy, and different formations will have different outcomes depending upon laboratory testing and field results.

From a logistical standpoint, produced water must be handled with care, as in many cases spills can result in reportable environmental incidents given the varying composition and often high TDS and salinities. This characteristic has limited the usage of produced water in certain basins such as the Denver-Julesburg Basin or in other areas of particularly high environmental sensitivity. The company expects technology to evolve to aid in these areas as well. The company has seen a move, for instance, from transport by trucking to transport via pipelines for water in a rapidly evolving water midstream business. This reduces wear and tear on roads, traffic, dust, congestion, etc., while moving produced water into a reliable system for transport of high volumes using huband- spoke type arrangements, which ties in closely to the move to pad-type well development.

Ultimately, the economics in particular basins will dictate overall usage of produced water. As an example for the Permian, Bloomberg estimated the cost of disposal of flowback water can be expensive ($1.50/bbl to $2.50/bbl). From a sustainability standpoint, it makes good sense to recycle and reuse as much produced water as possible, and technologies such as ReLease are rapidly evolving to allow cost-effective and reliable usage of this water in completion operations. This also includes, in some cases, cementing operations where the produced water is properly tested, as often salts can be used without harm to the American Petroleum Institute set cement properties.

As infrastructure continues to be built out, overall economics will improve and the trend of increasing the reuse of produced waters in most basins will continue. The technology is ready and is in implementation with many operators ready to make the vision of effective and optimized produced water management a key part of the planning and development of oil and gas fields across the U.S.

The bills would update decades-old laws governing oil and gas drilling to boost the program’s value for taxpayers.

Citing unnamed sources, the New York Times said that U.S. President Joe Biden would issue an executive order on Jan. 27 directing federal agencies to determine how expansive the ban on new oil and gas drilling on federal land should be. 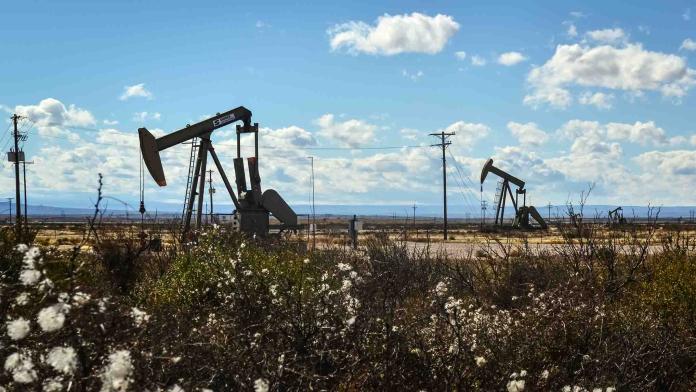 An extended ban on federal lands could imperil the state’s school funding.