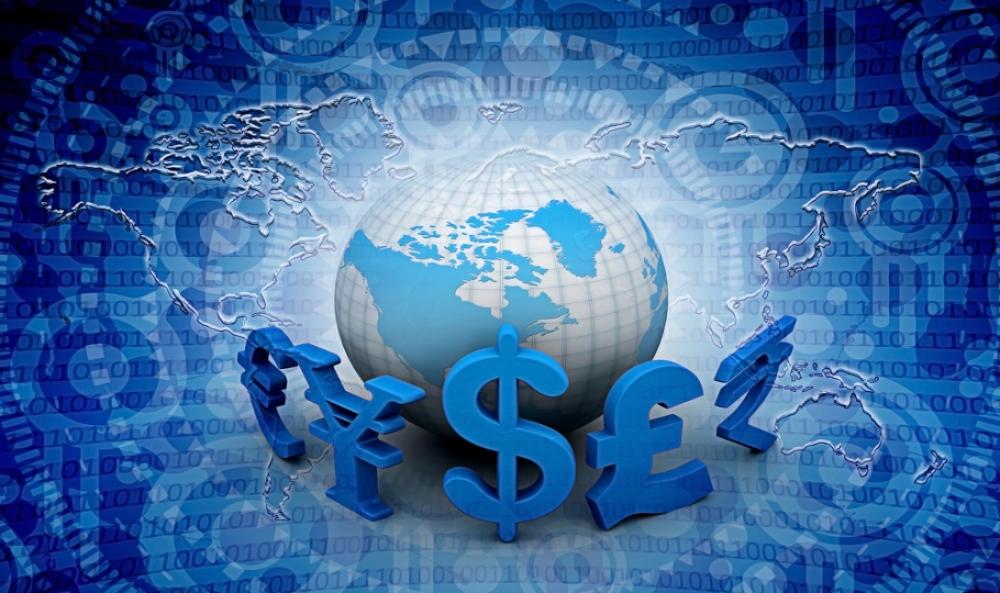 E&Ps could see their largest two-year drop in spending since the 1980s this year, according to a group of energy analysts who say 2016 will bring more spending cuts.

Cowen & Co. estimates E&P capex will be slashed by 17% to $447 billion this year. The cuts could be even deeper in North America, where spending could fall by 24%.

No region is predicted to escape the downturn’s prolonged wrath.

The survey of 450 companies’ planned spending also forecasts double-digit spending drops in Latin America, Asia-Pacific, Africa and Europe. Cowen believes even the Russian region will see less spending—down 1%. But Middle East spending could grow by 1%. In all, international E&P spending could fall by 15%. 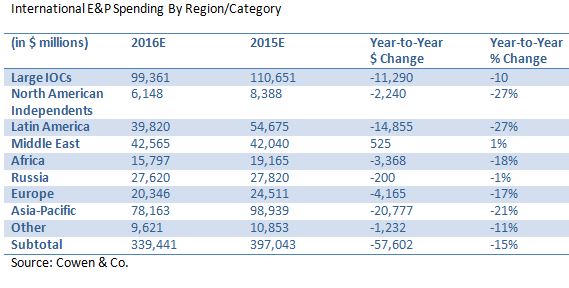 But the forecast could be more severe, considering data for the survey was collected in November when oil prices were higher. Cowen noted that companies used an average WTI oil price of $48.50/barrel for the survey. The annual forecast comes as the industry continues to endure the brutal consequences of an oversupplied market with oil prices now below $37/barrel.

“If these prices persist for much of 2016, budgets would be reduced further and declines in spending may be meaningfully more than what our survey suggests,” Cowen analysts said.

The percentage declines are not much different than those predicted by the analysts a year ago for 2015 when oil was trading for $70.05/bbl.

While improved technology and techniques have helped operators in North America unlock unprecedented amounts of oil and gas, lower commodity prices have caused them to slow the hydrocarbon flow and shutter rigs. With OPEC nations pumping at near record levels and Russia setting production highs, worldwide demand has been unmatched, sparking spending cuts to salvage bottom lines.

“In terms of an estimated total drop in spending, 2014-2016 is forecast to be the worst of any two-year decline in the history of our survey (since 1982),” Cowen said. “The only other downturn to rival this one is the 1985-1987 downturn, which featured a collapse in prices. The drops in the U.S. were fairly comparable, but were less in both Canada and internationally.”

The firm noted, however, that its estimates could turn out to be too optimistic or too pessimistic, given that the year has just begun.

“If we had to pick one however, we would take the view that oil prices are likely to remain sub-$50 per barrel over the course of 2016 and that average oil prices will not match the $48.50 that is the average that budgets are based upon,” the analysts said. “Hence the percentage declines could be greater than we estimate, particularly in North America.”

North America: Spending could drop by 24% to $89.6 billion in 2016. U.S. E&P spending is forecast to fall by 24%, with smaller companies cutting budgets the most—by 63% for spenders with budgets less than $50 million compared to 20% by big spenders with budgets greater than $1 billion, the survey showed.

The rig count is expected to drop to about 660 by year-end compared to 685 today. But capex could be higher per rig.

Latin America: Called an “area of weakness in 2016,” Cowen said spending in Latin America is forecast to plummet by about 40%. Analysts pointed out PDVSA’s payment issues and flagged potential spending declines by Petrobras as contributors to the region’s outlook.

“The Venezuelan state-owned company (PDVSA) is estimated to fall by nearly 30% while Petrobras is forecast to be down by 23%,” according to Cowen. “The Colombian company Ecopetrol should see just a moderate decline following last year’s large one and YPF in Argentina should see a relatively moderate drop due to ongoing horizontal drilling activity.”

Middle East: Despite the political turmoil brewing between Iran and Saudi Arabia, regional E&P spending is not expected to change much in the Middle East. Cowen predicts strong spending from Saudi Aramco and slightly more spending from ADNOC, Kuwait Oil, PDO and Qatar Petroleum. Iraq was the apparent weak spot, as spending will probably fall for North Oil, South Oil and Missan Oil, Cowen noted, bringing the region’s overall E&P capex down 1% to about $42.6 billion for select companies.

Elsewhere: Estimates are that spending will drop by 18% in Africa with severe spending cuts just about everywhere. The exception is Algeria, according to Cowen, where spending is forecast to increase 8% at Sonatrach.

Dubbed another area of weaker spending, select European E&P budgets show spending could fall 17% with Statoil, Repsol and Premier Oil leading the way, the survey revealed. Farther east, less spending from Petro China, Petronas and Sinopec are expected to contribute to the forecasted 21% spending drop in the Asia-Pacific region.

“Oil companies would require a sharp turnaround in oil prices to increase E&P spending from their original budgets in 2015,” Cowen said. “The substantial majority would need to see WTI crude prices of at least $60 per barrel to increase expenditures.”