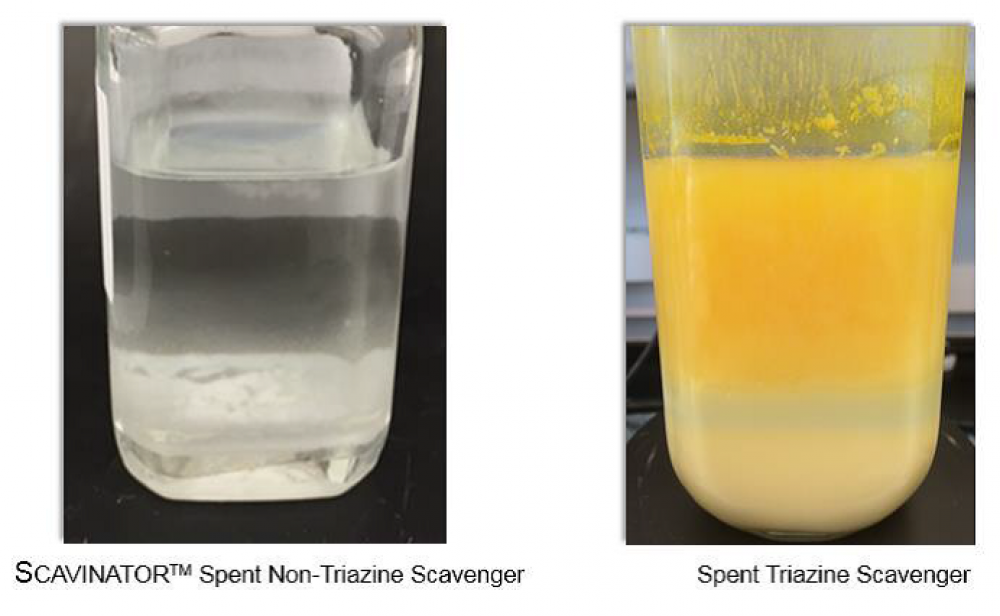 Controlling H2S is a vital part of ensuring troublefree upstream and downstream oil operations. Aware of the solids and high pH issues experienced by some triazine users, Clariant focused attention on developing an alternative scavenger chemistry that would be as fast-acting as triazine and capable of enhancing production by minimizing downtime linked to pipeline cleaning and solids removal.

The goal was to improve the total cost of ownership for H2S scavenging applications through minimal solid deposition achieved through pH control and a soluble byproduct.

The properties of the new SCAVINATOR technology has been proven through laboratory test results and field performance through extensive trials with large producers in the Eagle Ford Shale. These confirm its technical advantages in delivering best-in-class scavenging while maintaining full solids control and reduced potential for mineral scaling.

The novel technology can be applied either in batch form or continuously injected into pipeline streams or in contact towers. Its capacity to remove H2S and deliver comparable or superior scavenger efficiencies compared to triazine were initially indicated through laboratory testing. H2S was sparged through a volume of scavenger and the time taken to register H2S on the analyzer recorded.

This new technology has an equivalent gas breakthrough to standard 37.5% monoethanolamine triazine. This was achieved by diluting the technology to match the standard activity of triazine used in the field. As Clariant further develops this product, different activity levels may be explored.

Initial laboratory testing indicated complete solids control with no deposition of solid reaction byproducts. For example, to simulate direct injection applications, the nontriazine technology was recirculated using the company’s proprietary direct injection system, and this showed no solid deposition or performance impact. This would simulate chemical scavenging along a pipe with both spent and unspent product present.

To quantify the effect to mineral scaling, the influence on pH was measured. Neat and spent solutions of the nontriazine-based product were added to various produced water samples. The pH of the untreated water was 6.28. At a concentration of 500 ppm, addition of unspent triazine changed this pH to 8.33 and spent triazine to a pH of 7.53. The addition of 500 ppm of the nontriazine H2S scavenger yielded a produced water pH of 6.29 for unspent and 6.45 for spent scavenger. The figures rose for both solutions at a concentration of 10,000 ppm. However, the nontriazine scavenger had a much less significant impact, showing a pH of 6.41 unspent and 7.95 spent. The results for the triazine scavenger were 9.05 unspent and 8.60 spent.

These results show the potential for order-of-magnitude reductions in scavenger-induced calcium carbonate scaling and therefore a much lower risk to the overall flow assurance for a production system.

From laboratory to the field

To test these laboratory-generated performance values in the field, the company collaborated with two operators in the Eagle Ford Shale to determine if the laboratory results were scalable to the field. The aim of the field trials was to discover an alternative to triazine that would also minimize associated side effects like mineral scale; reduced flow regime in the pipeline; and insoluble byproducts that also can negatively impact water quality, color and odor. The two producers set key performance indicators (KPIs) for the triazine alternative to achieve. 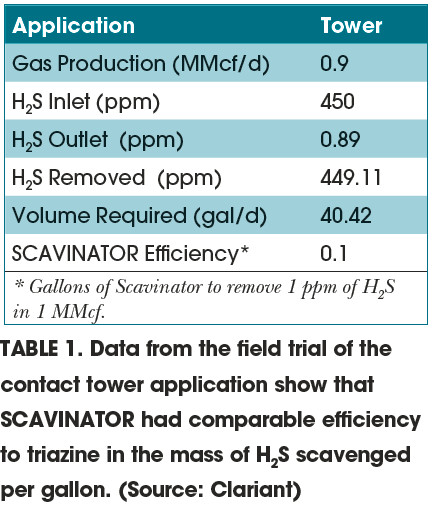 The KPIs established by the customers were met, and the additional challenges experienced when using triazine were overcome. Normal operations were not affected during the trial periods. Preliminary laboratory test findings were confirmed through the results from the field trials.

Direct injection application. In these customer applications the new technology showed an average efficiency of 0.08 gal of scavenger required to scavenge 1 ppm of H2S in 28.3 Mcm (1 MMcf) of gas. This calculated efficiency shows it to be superior to the standard triazine efficiency seen for direct line injection in low-gas-velocity regimes (0.2 gal to 0.5 gal to remove 1 ppm H2S per 28.3 Mcf). The flow regime for this application did not meet the gas velocity required for optimal scavenging efficiency at each individual well nor at the commingled location. The amount of H2S scavenged was 1.3 lb of H2S per gallon with the new technology vs. 0.2 lb to 0.5 lb of H2S per gallon of triazine.

For this particular direct injection system the new technology showed superior efficiency when compared to triazine in applications where the actual gas velocity was below critical velocity. The well parameters for each individual well and comingled location are detailed in Table 2 along with chemical injection rates.

Preliminary laboratory findings were confirmed through the field trial results. The alternative chemistry confirmed greater scavenging efficiency when compared to triazine, especially in low-gas-flow applications. It met the KPI set by the operator as well as showing success in overcoming the additional challenges experienced during triazine usage. As with the contact tower application, normal operations were not affected during the trial period.

Based on numerous laboratory tests and field trials, an extensive package of benefits can be confirmed with SCAVINATOR. It has been proven to have a superior scavenging efficiency to that of triazine in direct injection applications and comparable scavenging efficiency in contact tower applications without any evidence of solids deposition. Plant operating efficiency is improved, and the solids control leads to less downtime for operators, which in turn leads to enhanced production. The minimal pH impact and associated mineral scaling enhances flow assurance, with the effect of further increasing production and supporting injection well performance improvement.