A new generation of borehole seismic vector sensor systems has been developed based on all-fiber-optic data transmission and fiber-optic sensor technologies. The new vector sensors are much more sensitive and are able to record much larger bandwidth data with better vector fidelity than is possible with current seismic sensor technologies. The new sensors also can operate in most hostile environments found in boreholes such as HP/HT conditions. This improvement in data quality and density will generate better images and more precise monitoring results, which will allow a much improved high-resolution interpretation and ultimately better oil and gas production.

Since the borehole seismic system does not require electric power for either the optical sensors or the hydraulically operated deployment system, the entire system is intrinsically safe. The new system is capable of deploying up to 1,000 three-component (3-C) sensor pods suitable for deployment into HP/HT boreholes. Tests of the fiber-optic seismic vector sensors have shown that the new sensor technology is capable of generating high vector fidelity data with a very large bandwidth of 0.01 Hz to 6,000 Hz. Field tests have shown that the system can record events at magnitudes smaller than M-3.0 at frequencies up to 2,000 Hz. The sensors also have proven to be about 100 times more sensitive than the regular coil geophones that are used in borehole seismic systems today. The optical vector sensors come in ½-in. and 1-in. sizes. The 1-in. model is used for a redeployable borehole system, while the ½-in. model is used for a permanent borehole system. The ½-in. optical sensor, despite the small size, still outperforms state-of-the-art accelerometers and geophones.

Fiber-optic borehole technology
A large-aperture ultrasensitive borehole seismic array with a close interpod spacing capable of operating at high-temperatures will for the first time enable the recording of large amounts of data with the high quality and high frequency needed for high-resolution borehole seismic 3-D imaging and 4-D monitoring of conventional and shale oil and gas reservoirs.

The drillpipe deployment design allows the receiver array to be deployed in both vertical and horizontal wells, which is an operational requirement in shale oil and gas wells since many of the wells drilled for shale oil and gas are highly deviated or horizontal. The deployment of the drillpipe-deployed borehole seismic system is shown in Figure 1. The application depicted in this illustration is the combined monitoring of the microseismic events from the primary fracturing process as well as monitoring the injection of acoustic micro-emitters (AMEs) into the fracture. The AMEs generate small microseismic events at a predetermined time after being injected into the fractures together with the proppant in small concentrations. The all-metal clamping system for the 3-C sensor pods uses drillpipe hydraulics as a power source. The fiber-optic sensors are operated using only pulsed laser light from surface electronics and manufactured using high-temperature fibers. 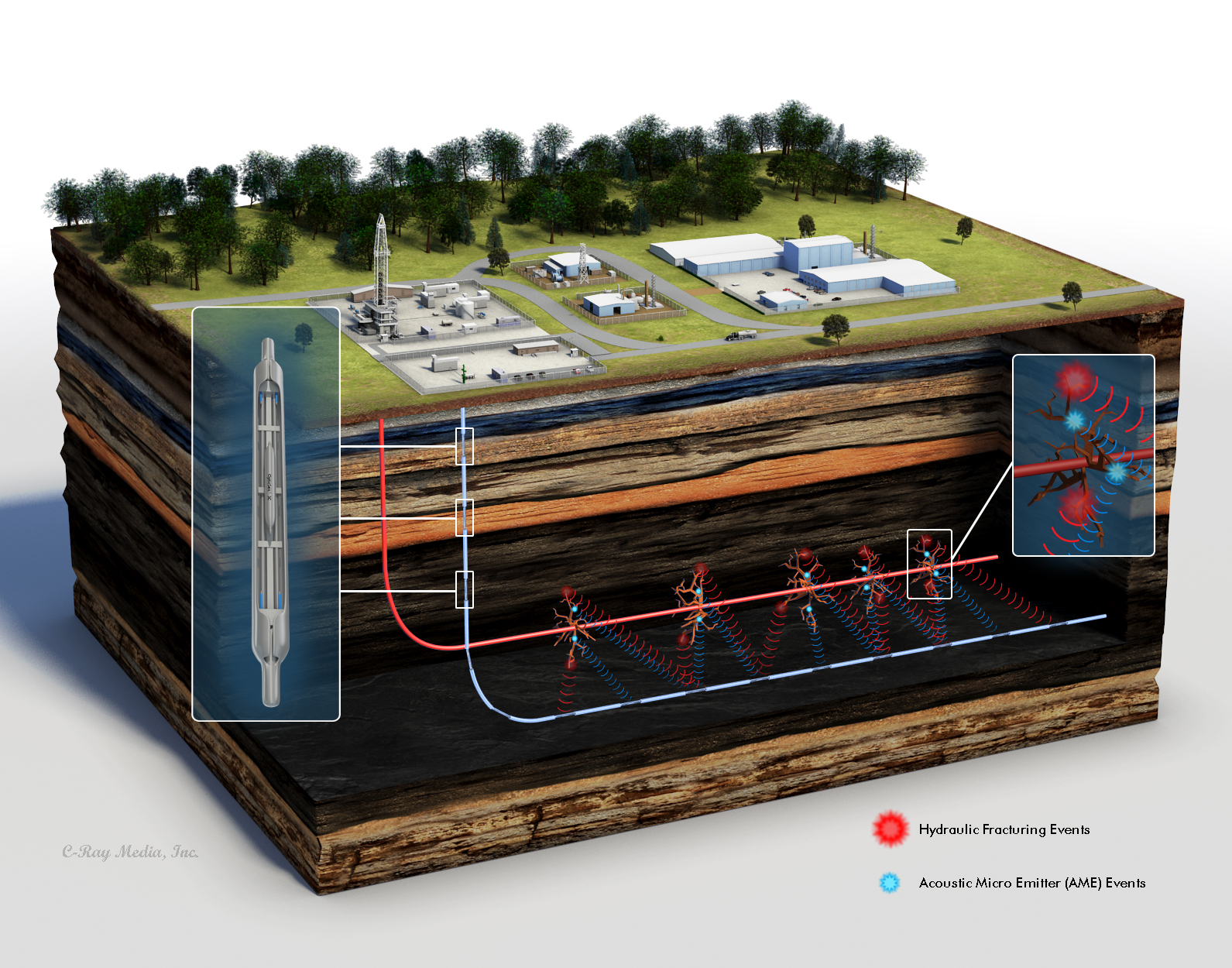 The fiber-optic seismic-sensor system dynamically measures the strain of the fiber between two Fiber Bragg gratings surrounding the mandrel using an interferometric measurement technique comparing the phase angle between two spaced reflections from the same light pulse traveling in the fiber. It is using a time division multiplexing technique to transmit the dynamic fiber strain information to the interrogation instruments at the surface. This allows the measurement of extremely small strains in the fiber. The fiber-optic seismic sensor is immune to electric and electromagnetic interference in the borehole since the system does not require any electronics at the fiber-optic sensor end. This design also makes the fiber-optic seismic sensor extremely robust and able to operate in extreme environments such as temperatures up to and more than 300 C (572 F.). Even higher temperatures are possible using specialty metal-coated fibers.

Field data sample
The prototype system was tested in a survey to evaluate the response of the fiber-optic seismic sensors using both surface and downhole seismic sources. The data shown in Figure 2 are from string shots. The downhole sources comprised very small TNT charges that were shot in a well 335 m (1,100 ft) from the receiver well where the fiber-optic seismic sensor array was deployed. The source was set off at a depth of 91 m (300 ft), while the receivers were placed at a depth of about 274 m (900 ft). The straight line distance between the source and the receiver is thus about 366 m (1,200 ft).

The data displayed in Figure 2 are from shots ranging from 0.6 gram to 2.6 gram of TNT (string shots).

They are post 3-C rotation displayed using true relative amplitude. Figure 2’s inset image also shows the frequency spectrum of the data from a charge of 0.65 gram of TNT. Filter slice analysis of the data shows energy more than 1,500 Hz.

All the sensors are calibrated so the optical output amplitude into absolute acceleration can be mapped. The data recorded from the small TNT charge were analyzed and compared to micro-earthquakes. It was calculated that the 0.6 gram of uncoupled TNT in a fluid-filled well is equivalent to an earthquake with magnitude M-2.9. Small earthquakes do not only have low energy, they also generate mostly high-frequency seismic data, so any sensor that is deployed to monitor small microseismic events must not only be sensitive but also be able to record high frequencies. 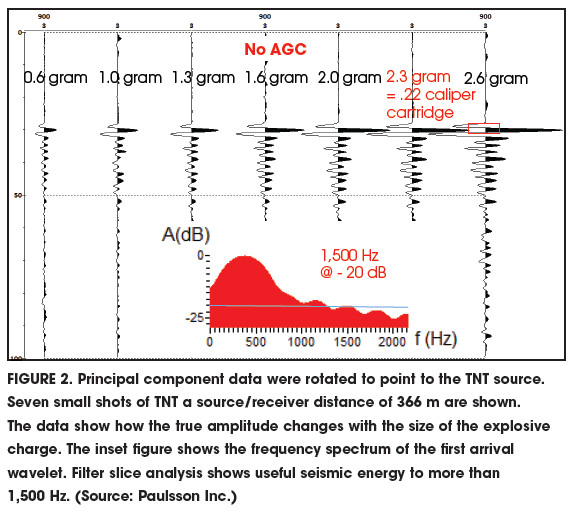 Overall transport earnings were down, however, as long-haul movements declined.