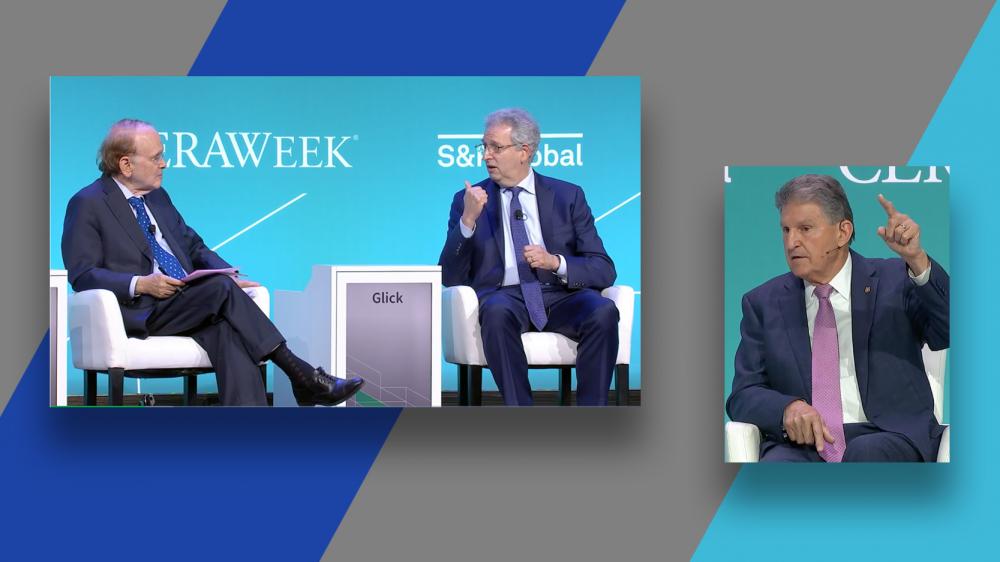 HOUSTON—The chairman of the Federal Energy Regulatory Commission (FERC) pushed back against insinuations of an “anti-gas agenda” at last week’s CERAWeek by S&P Global, insisting that permit approvals are more likely to stand up to judicial scrutiny when his agency conducts rigorous reviews of applications.

“That was canceled because their regulatory reviews kept getting thrown out in courts because the previous administration wasn’t handling their reviews right,” Glick said. “We have the Mountain Valley Project that FERC has approved, but the Forest Service, the Interior Department, their reviews were found deficient.”

The EQT report suggests that U.S. LNG exports can increase to an incremental 50 Bcf/d, the combined equivalent of electrifying all passenger

Sen. Joe Manchin (D-W.Va.) responded harshly to Glick’s comments when he spoke later at CERAWeek, maintaining that FERC has abdicated its responsibility to work with industry and offer guidance in following regulations.

“I’m not saying push them through quickly,” Manchin was quoted as saying in reference to projects awaiting approval. “Just do your damn job, that’s all I told him.”

Glick acknowledged the frustration of developers when delays and costs mount but he maintained that FERC’s approach was more legally durable.

“Yes, that might require a couple extra months on the front end in terms of a review of the environmental impacts of the project and analyzing the greenhouse gas emissions,” he said. “But just because you analyze greenhouse gas emissions, like we analyze any other potential environmental impacts for each project, doesn’t mean the project will be rejected. What it does mean is that we’ve got to do our job … and when the courts review them, you know what? They’re going to say, ‘they approved the project and they did it the right way.’”

What it takes to get approved

Getting to approval is likely to depend on how the hydrocarbons are ultimately used, and the process with federal agencies is anything but straightforward. A developer may view construction of an LNG export terminal as a simple matter that fits climate policy because it allows an overseas customer to shift from coal to gas.

But the export component is beyond FERC’s jurisdiction, Glick said. It is the Department of Energy that reviews the environmental implications of the gas when it gets sent overseas.

However, if a domestic pipeline project can be shown to transport gas to an electric generation facility that will replace coal or fuel oil, the commission will take those emission reductions into account when deciding on a permit approval. Those aspects of the application would be considered benefits.

A growing population in a particular area in need of more natural gas to consume is a positive factor, as well, he said.

“By its nature, if you’re going to utilize the pipeline more often because it’s a growing area, the emissions are going to be higher,” Glick said. “But then again, you’re balancing those emissions on the impact on climate change against the benefits of the project or to satisfy the growing energy needs of an area.”