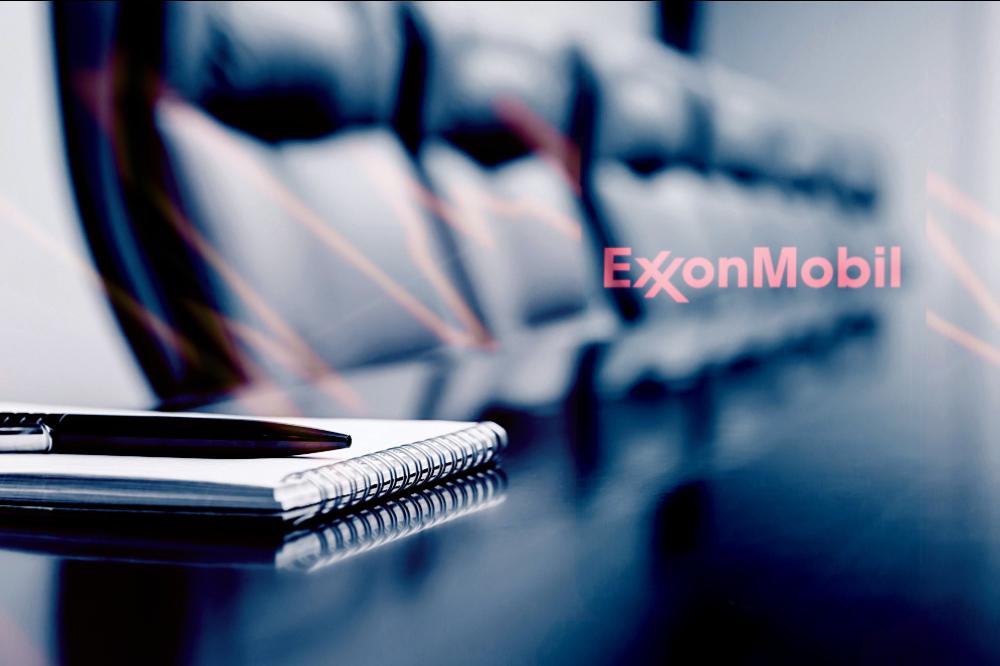 In a statement, Exxon Mobil said Jeff Ubben and Michael Angelakis would help the company as it “advances plans to increase shareholder value by responsibly providing needed energy while playing a leadership role in the energy transition.” (Source: Shutterstock.com; Exxon Mobil logo by Walid Berrazeg / Shutterstock.com)

Exxon Mobil Corp. on March 1 named activist investor Jeffrey Ubben and former Comcast executive Michael Angelakis to its board amid a push by prominent shareholders for it to focus more on clean energy and improve its financial performance.

Exxon has fended off attempts in the past to get it to change its policies and leadership, but pressure has mounted since the top U.S. oil producer posted a historic annual loss for 2020 after the coronavirus pandemic slashed energy demand.

The company responded by reducing the value of its shale gas properties by more than $20 billion, cutting spending on new projects by nearly a third, laying off workers and adding $21 billion to its debt to cover spending.

Exxon Mobil said their appointments increased the size of its board to 13 directors, 12 of whom are independent. Earlier this year, Exxon named Tan Sri Wan Zulkiflee Wan Ariffin, a former CEO of Malaysian state energy firm Petronas, to the board.

In a statement, Exxon Mobil said Ubben and Angelakis would help the company as it “advances plans to increase shareholder value by responsibly providing needed energy while playing a leadership role in the energy transition.”

Exxon Mobil, which was once America’s most valuable company but now has a market value of only $240.6 billion, has faced fresh pressure from investors since late last year. The company is scheduled to hold its annual investor day this week.

Exxon versus BP: Managing Reputation Risk in the Era of ESG

While running ValueAct, Ubben had long been viewed as a collaborative director who would work behind the scenes instead of publicly calling for the CEO to be fired.

For the last three years, he has served as a director at energy company AES—he resigned on March 1 because he was joining the Exxon Mobil board—where he helped the once coal-heavy power generator transition more to renewable energy. AES’ share price more than doubled during his time on the board between early 2018 and now.

Industry analysts generally welcomed the board appointments, but some criticized them for not going far enough.

“It remains to be seen how receptive Exxon’s management will be to this pressure,” said Pavel Molchanov, an analyst with Raymond James, adding that “not all board members share Ubben’s focus.”

The move “looks like a missed opportunity,” said Andrew Logan, senior director of oil and gas at Ceres, a nonprofit organization that works with institutional investors and companies. “While the two candidates are impressive on their own, their appointments don’t do anything to fill the gaps in experience on the Exxon board that have so concerned investors.”

Engine No. 1, a newly formed activist firm, publicly said it is trying to place four new directors on Exxon Mobil’s board and prominent hedge fund D.E. Shaw said it is working behind the scenes to force change at the company. While best known as a fund that focuses on quantitative analysis, D.E. Shaw has pushed for change at Lowe’s Cos. and Emerson Electric. Engine No. 1’s Charlie Penner was involved in many activist campaigns at Jana Partners.

In the face of that pressure, which some shareholders say will continue even as the new board members begin to advise the company on how it spends its money and focusing more on renewable energy, Exxon Mobil has cut its spending plans and disclosed updated emissions targets.

D.E. Shaw said it welcomed the steps Exxon had taken in identifying cost savings and adding Ubben and Angelakis to the board, saying they will bring “significant capital markets and capital allocation experience to the boardroom and will provide meaningful value to the company.”

Engine No. 1 said: “We remain confident our nominees bring the right experience and skills to help put Exxon Mobil on a path to sustainable, long-term value creation for the benefit of all shareholders.”

Exxon Mobil’s shares, which have lagged those of its closest rival Chevron Corp. by a wide margin in the last five years, jumped 4.9% in trading to $57.02. The shares are up about 40% so far this year.

Since December, Exxon Mobil has said it would reduce the intensity of its oilfield greenhouse gas emissions by 15% to 20% from 2016 levels. It did not set an overall emissions target, however, and reducing intensity means that emissions still could rise if oil and gas output grows.

It also announced plans to commercialize technology that helps reduce carbon emissions and disclosed its Scope 3 emissions, a large category of greenhouse gases emitted from fuels and products it sells to customers, such as jet fuel and gasoline.

Federal Judge Temporarily Blocks Drilling On About 300,000 Acres In Wyoming

A federal judge ruled late Tuesday that the Interior Department violated federal law by failing to take into account the climate impact of its oil and gas leasing in Wyoming.

Russia Says Nord Stream 2 Will Be Ready Within Months