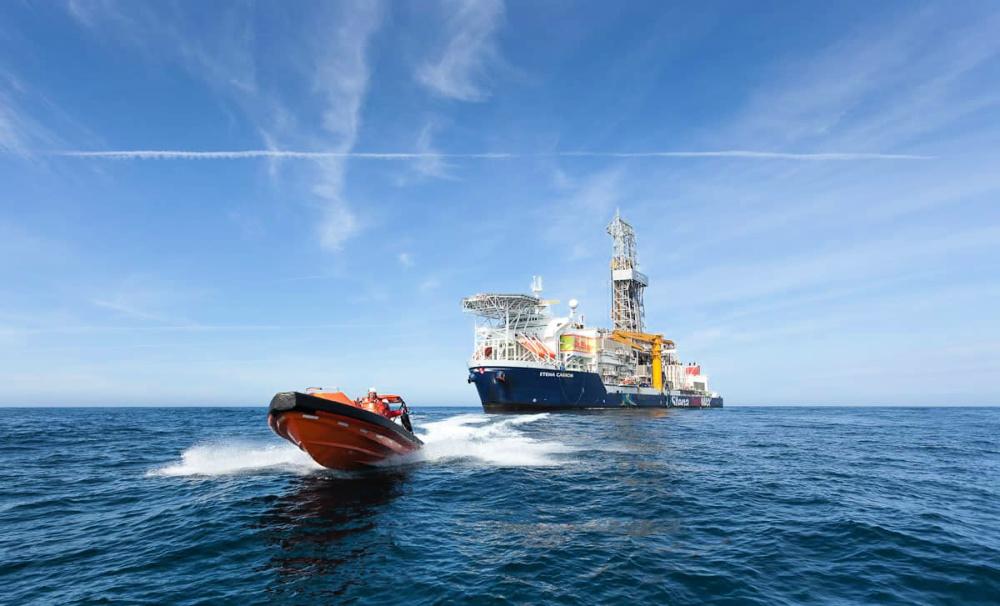 Including the latest discoveries, Seabob and Kiru-Kiru, partners Exxon Mobil, Hess and CNOOC have made 28 major discoveries in the Stabroek Block offshore Guyana to date. Pictured is the Stena Carron drillship, which was used to drill the Seabob-1 well located southeast of the Yellowtail Field. (Source: Stena Drilling Ltd.)

Exxon Mobil Corp. and partner Hess Corp. reported two new discoveries offshore Guyana in the Stabroek Block on July 26, representing the sixth and seventh by the partnership this year.

Resources found in the prolific Stabroek Block will support at least six FPSO units by 2027 with a gross combined production capacity of over 1 million bbl/day. There is potential for up to 10 FPSOs to develop the gross discovered recoverable resources, and “multibillion barrels of future exploration potential” remains, Hess CEO John Hess added in a press statement on July 26.

Hess and its partners have already sanctioned four developments offshore Guyana in the Stabroek Block, which covers 6.6 million acres, and more developments are to come in the future. Production from the first two developments has already reached 360,000 bbl/day, Hess said.

The first development on the block, Liza Phase 1, commenced production in December 2019 and was ahead of schedule. The development recently achieved a new production capacity of over 140,000 gross bbl/day in the second quarter 2022 after production optimization work on the Liza Destiny FPSO.

The third development, Payara, remains on track to commence initial production in late 2023 using the Prosperity FPSO, which will have a production capacity of 220,000 gross bbl/day.

The fourth development, Yellowtail, will be the partner’s largest development to date. It is expected to start producing in 2025, using the One Guyana FPSO, which will have a production capacity of 250,000 gross bbl/day. SBM Offshore recently completed the $1.75 billion project financing of FPSO One Guyana destined for the Yellowtail development.

Dash for Gas: Why Fracking is Back on Britain's Agenda

Recession Will Be Necessary to Rebalance the Oil Market: Column

2022-09-23 - "Profit-maximizing enterprises do not intentionally invest in higher oil inventories or spare production capacity," Reuters' John Kemp said in a recent column on recession as it is tied to the oil market.