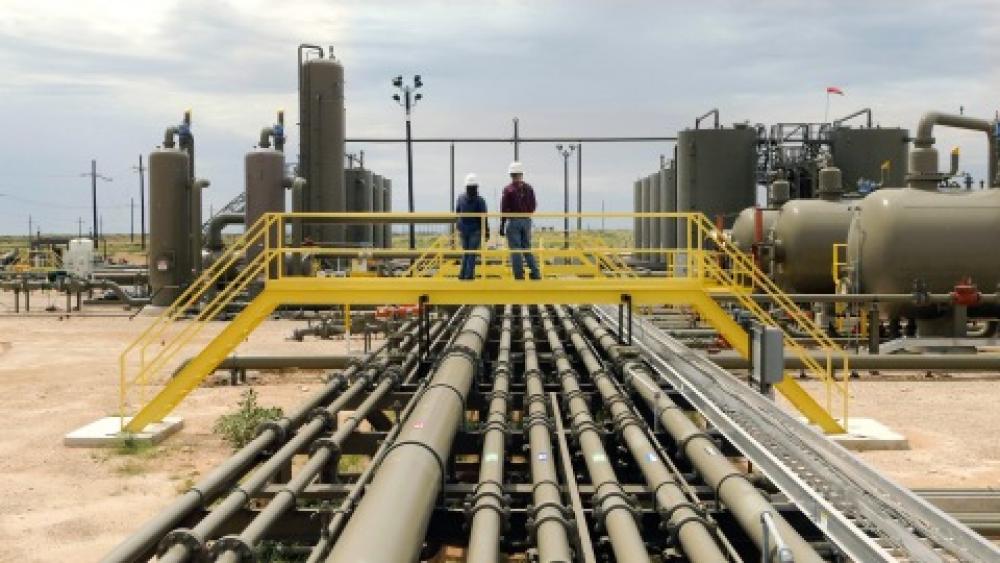 ExxonMobil employees oversee a production facility in New Mexico, where the company plans to begin the certification process for natural gas produced in the Permian Basin. (Source: Business Wire)

Exxon Mobil Corp. announced Sept. 7 that it will begin measuring carbon emissions from production of natural gas at a New Mexico facility, joining a number of shale gas producers seeking to provide the data to buyers.

MiQ—a partnership between RMI, formerly the Rocky Mountain Institute and London-based consultancy SYSTEMIQ—has developed the “MiQ Standard,” a framework that assesses and grades methane intensity, enhanced monitoring technology deployment and operating practices that promote a culture of emissions management and continuous improvement. A MiQ accredited independent auditor performs the assessment and MiQ issues tradeable certificates based on the grade achieved.

“We are reducing methane emissions responsibly and economically, and by working with MiQ, we can provide our customers with credible third-party validation of those efforts,” said Bart Cahir, senior vice president of unconventional at ExxonMobil. “As we improve our operations, certifying our natural gas will help our customers achieve their goals and support a lower-carbon future.”

Exxon Mobil has selected Poker Lake for certification because of the wide range of technology solutions already in place, scale advantages, proximity to nearby markets and growth potential as production in New Mexico increases.

The certified natural gas could be available to customers by fourth quarter 2021, ExxonMobil said, adding that the company is considering expanding certification to include other Permian Basin fields and shale production areas including Appalachia and Haynesville.

Georges Tijbosch, senior advisor at MiQ, said, “We’re pleased to be working with Exxon Mobil at Poker Lake and look forward to a fruitful long-term partnership that creates a differentiated, more transparent and cleaner gas market. These steps and the rapid reduction of methane emissions is critical to the world achieving its climate goals.”

Earlier this year, a tiny activist hedge fund took three seats on Exxon's board. Its climate strategy was central to the campaign.

Exxon this year began disclosing the emissions that result when customers use its products such as gasoline and jet fuel.

The company previously announced plans to further reduce greenhouse gas emissions in its operations by 2025, compared to 2016 levels. The plans include a 15% to 20% reduction in greenhouse gas intensity of upstream operations.

As a standalone business, GD Energy Products says it will focus its efforts on serving the upstream oilfield service sector, while continuing its legacy of delivering “highly-engineered and efficient, customer-driven solutions to meet the evolving needs of the market.”