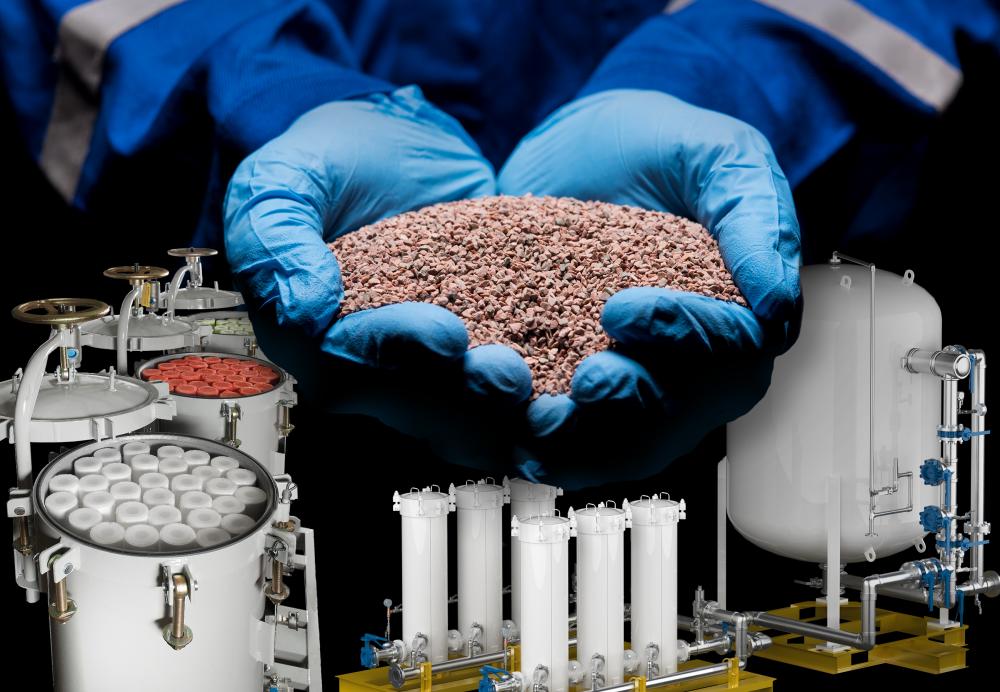 The maturing of the global oil field presents ongoing complications in an industry looking for cost-effective solutions to revitalize production in the face of an ever-increasing water cut. Nearly every mature conventional well requires some form of EOR to reestablish healthy oil/water ratios that are continually changing and often represent a marked reversal of what they were when the field was in its heyday.

When oil production slows down as wells age, producers pump water into the reservoir to increase pressure, enhancing the flow of oil through various pathways in the formation. Over time the water finds the easiest path between the point of injection and the well, ultimately scrubbing that pathway of oil, which results in a decline in production. This necessitates implementation of another means to boost oil flow.

Polymer and alkaline surfactant polymer floods, whereby soluble polymers are blended with the water to increase viscosity, have long been considered the best return on investment for achieving tertiary recovery in aging fields. Substances typically used in polymer floods are high molecular-weight linear anionic homopolymers or copolymers, which thicken the water to around 15 centipoise (cp) as it is pumped downhole. The polymer- thickened water plugs those easy pathways, forcing the flow to find its way through untapped parts of the formation to recover otherwise trapped oil.

This type of chemical EOR has been pursued reluctantly by the industry. The primary reason is that treating produced polymer water for the removal of suspended solids (including corrosion byproducts and precipitated materials such as silicates and calcium carbonates or particulate) and recovering the oil from the water poses significant economic and technical hurdles.

The produced water, which has a higher viscosity due to the remaining polymer fragments, cannot be effectively processed by conventional flotation equipment and even impairs most conventional centrifugal separators.

These produced water treatment applications are designed to treat produced water with a viscosity of about 1 cp. When the polymer water returns to the surface, it is less thick than when it was pumped downhole but can still have a viscosity of about 5 cp, easily reducing the efficiency of the facility by more than 50%. The water-thickening polymers eliminate the ability to implement coagulation, which uses cationically charged polymers to accelerate the separation of oil droplets and suspended particles from water.

Operators have used chemical oxidizers to destroy the remaining polymer and thin out the water, reducing the viscosity and allowing the water to be treated and recovered. That strategy, however, means the remaining polymer is lost, and an additional polymer must be added back into the treated water before it can be reinjected. The loss of the valuable returned polymer means an increase in polymer requirements by 30% to 50%, adding considerable operational expense. Cost-efficiency is critical in EOR operations since water now represents the biggest expense in bringing oil to the surface. In light of these issues, producers often choose to pursue other means of tertiary recovery rather than undertake an expensive polymer flooding campaign.

A new technology addresses this challenge by removing oils and suspended solids from the water as it comes to the surface while leaving most or all the residual polymer intact. The process, which functions regardless of viscosity, uses no chemicals to treat the produced water with 95% single-pass efficiency and can reduce the amount of polymer required to be added back into the water for reinjection by at least 30%.

The environmental benefits and cost-savings of reducing water treatment chemicals and polymer can be significant. For example, the media eliminates the need to build million-barrel settling pools to allow sufficient time for suspended solids separation to occur.

The MYCELX RE-GEN advanced water treatment uses a backwashable media to treat produced water and oily wastewater streams, functioning as a primary or secondary treatment option for oil and solids removal. The media comprises an inorganic substrate coated with oleophilic polymer. Suspended solids are mechanically filtered by the media while the polymer coating adsorbs oil from the passing stream. The media is backwashable, so once it becomes fully saturated with oil and particulates that are filtered from the produced water, the flow is reversed by scrubbing the media clean of the oil and solids, which are then removed from the system. The clean regenerated media is then ready for filtration, and the process is restarted. 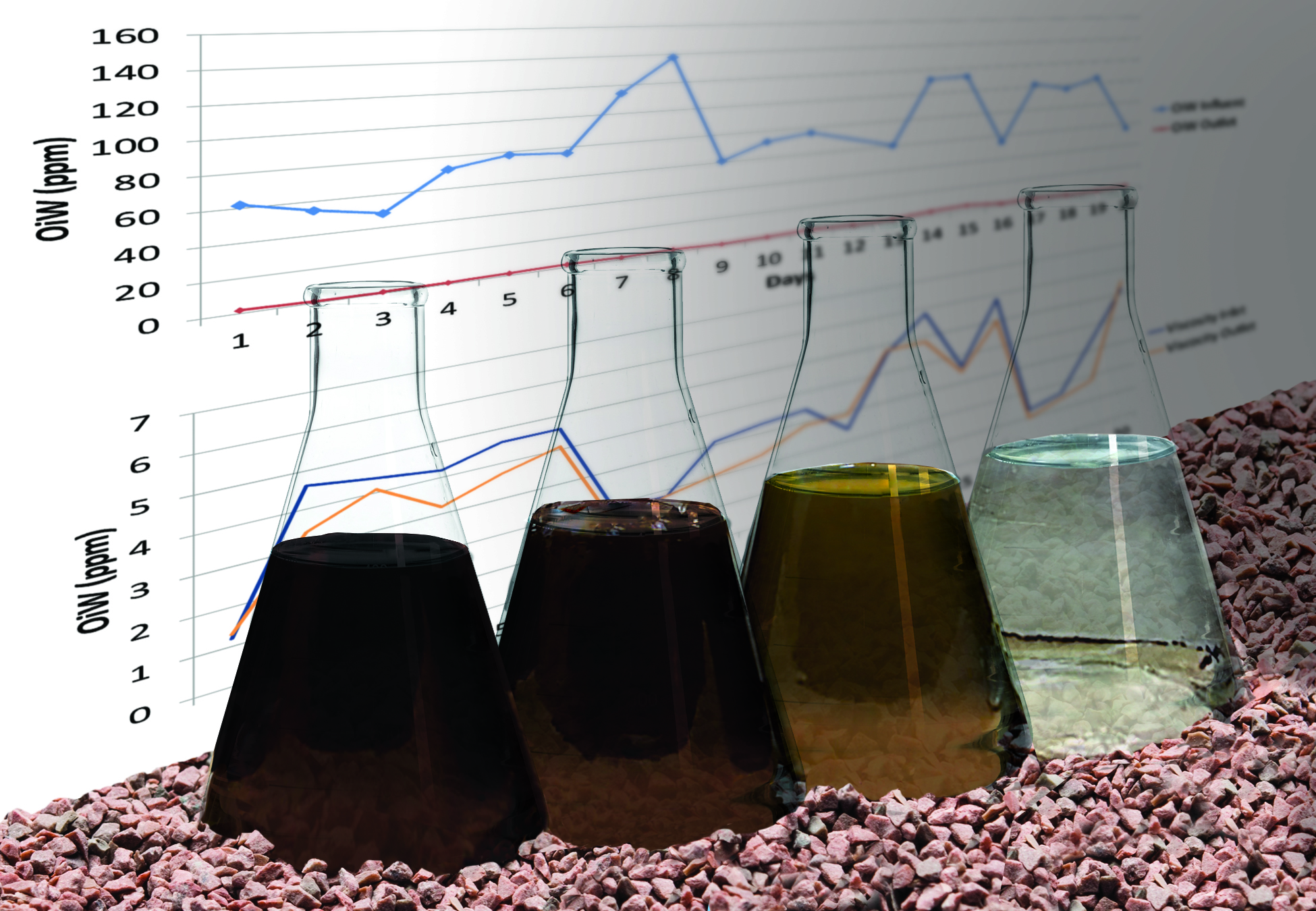 This approach is unique because the polymers can be regenerated in the backwash process. Similar water treatment technologies that use clays with oleophilic polymers must be transported to a disposal site after being saturated with oil. The water treatment media removes oils and suspended solids down to 5 μm without the use of chemicals in one step. No settling ponds or additional chemicals for water separation are required. The treatment can be designed based on the quality of the influent water, discharge requirements and the end use of the treated water. For EOR applications, polymer and chemically laden water treated with the media can be recycled and reused for injection. There is no viscosity loss since the system treats the produced water without having to oxidize the viscosity-building polymer.

The advanced water treatment media has been deployed in several successful pilot tests, including one for a major operator in India. In North America the technology recovered 98% of the oil content from heavily emulsified produced water, enabling polymer injection reuse in an EOR campaign in a mature field with medium-heavy oil. In this case, the operator needed to decontaminate the produced water emulsified with 200 parts per million (ppm) to 2,500-ppm oil and grease and 50 ppm to 100 ppm solids, all with varying degrees of viscosity. The customer chose to deploy the MYCELX technology to attract, recover and remove varying concentrations of oil types.

Conventional filtration methods proved insufficient in consistently treating the water to less than 10 ppm of oil, which was the level that was required for recycling the produced water and minimizing the use of chemicals during polymer flooding.

To overcome these issues, the process was initiated with an oil/water separator to recover oil in the first stage and was followed by the MYCELX RE-GEN advanced water treatment media for the second stage. This approach allowed the operator to consistently recover up to 98% of the oil from the produced water to achieve concentrations of less than 10 ppm. The advanced water treatment media enabled the removal of suspended solids and the recovery of oil from the produced water without destroying the residual polymer, thus allowing reuse of the water at a major cost savings.

Expanding the viability of polymer flooding in EOR campaigns through the deployment of the MYCELX RE-GEN advanced water treatment media opens new possibilities for operators to revitalize and extend production in mature wells while maximizing field economics.

Halliburton Slashes Dividend by 75% in Latest Move to Save Cash

Halliburton and larger rivals Schlumberger Ltd. and Baker Hughes Co. posted losses for the first quarter, owing to heavy writedowns on assets on the back of low oil prices.