Argentina is home to the Vaca Muerta formation, the most developed unconventional play in the Americas outside the U.S.

But, despite this massive subsurface resource base and potential to develop a thriving LNG export business, economic and political issues seemingly always brewing above ground remain as formidable headwinds for foreign and domestic investors.

Hart Energy Senior Reporter Pietro Donatello Pitts spoke briefly with Mark P. Jones, the Joseph D. Jamail Chair in Latin American Studies at Rice University in Houston, about some of the above headwinds investors confront in Argentina. Jones is a professor in the Department of Political Science, the James A. Baker III Institute for Public Policy’s Political Science Fellow and the faculty director of the Master of Global Affairs Program.

Mark P. Jones: Argentina is a country that in oil and natural gas has tremendous potential. So, it’s tough to overstate the potential that the Vaca Muerta has.

The problem of getting the natural gas in particular to market has always been above ground in terms of regulatory and transportation infrastructure, as well as having the logistics to take full advantage of the gas in terms of the petrochemical industry and LNG.

All the major companies want to keep a foot in Argentina because the Vaca Muerta is simply too important a resource to not have a presence in. The difficulty has simply been the Argentine government creating aboveground risks such that companies either are reluctant to make deeper investments that might cause them to have fixed assets that make them vulnerable to an implicit or explicit expropriation or to make investments where they don't have the ability to get their oil and gas to a foreign market where they can get a real return on their investment.

PDP: What’s missing for Argentina to move forward as an LNG exporter?

MPJ: They need two big things. One is the new gas pipeline, the Gasoducto Néstor Kirchner. That will help things quite a bit and resolve the twin problems. First, it will allow Argentina to use domestic gas instead of importing it, which will save billions in terms of foreign currency. Second, during the austral summer and boreal winter, it will provide Argentina with the potential to export LNG to Europe and elsewhere.

“One of the dangers for Argentina is that at some point the window on LNG is going to close as a fuel.”—Mark P. Jones, Baker Institute for Public Policy

Although the problem with that is who’s going to build the LNG plant. [Apart from that], in the U.S., we’ve built several LNG plants from the Beaumont/Lake Charles area down to Corpus Christi, so we have experienced and [know] it takes a long time here in the United States. And anything that takes a long time in the United States can take double that amount of time in an environment like Argentina.

I think one of the dangers for Argentina is that at some point the window on LNG is going to close as a fuel. You may start to have some countries or companies be reluctant to make an investment in an LNG plant that won't become operational for two to four years and may not essentially pay for itself for another ten years because you're trying to predict gas demand in the world in 2035.

PDP: What about the opportunity to export Argentine gas to Chile and then use the existing plants there to build out liquefaction capacity?

MPJ: That’s an option but the difficulty there [even though] you don't run the risk of your LNG plant being expropriated is the risk of the gas being turned off and that's what the Chileans experienced during the late 2000s. The Chileans built their entire energy matrix based on cheap natural gas from Argentina and then the Argentines slowly but surely turned off all the gas.

PDP: So even if you did make the investments in Chile, there’s still a lot of risk?

MPJ: Yes, as you’re just still depending on Argentine gas at the end of the day. Let’s say I built that gas plant in Chile, the Argentines can’t expropriate so it can’t be an explicit expropriation, but implicitly they can say, "Yes we’ll sell you gas, but we’re only going to sell it to you at a price say for instance of $15/MMbtu." So, the fear is you can’t trust any contracts and the only way I think the LNG plant in Argentina gets built is the same way the pipeline gets built and that is by the government.

PDP: If we have to rely on the Argentine government, which is seemingly always confronting financial and economic headwinds, the long-term LNG exporting options it’s something that might never materialize, right?

MPJ: Right, especially because we're about to hit the bewitching period where—even with the Gasoducto Néstor Kirchner—[whereby] if the government doesn’t think they can get it operational by the next Argentine winter or the spring before the election then at some point they may just pull the plug. Why spend money or scarce hard currency on a pipeline that’s only going to benefit your successor, which is likely going to be an opposition politician like Horacio Rodríguez Larreta, Patricia Bullrich or Mauricio Macri?

So, that’s where the country could get even further behind the eight ball because no real progress would be made regarding the pipeline and it’s only when the new government takes control that we’re able to focus back on it but that means redoing all the contracts and then you’ve lost another couple of years. Even then you can’t even really start to think about building an LNG plant until you actually have that pipeline operational.

PDP: So, LNG exports from Argentina are still not really promised any time soon?

MPJ: No, and I think the fear for Argentina as a country is that at some point the global demand for gas is going to start to plummet. And they may hit a point in the not-too-distant future where there is no LNG market anymore because a sufficient number of countries have gone to renewables and, as a result, the gas market is satisfied by the Permian and other existing sources for the most part.

2023-01-27 - Sue-Ann Operating retained EnergyNet for the sale of its non-operated working interest in the North Penwell Unit in Ector County, Texas. 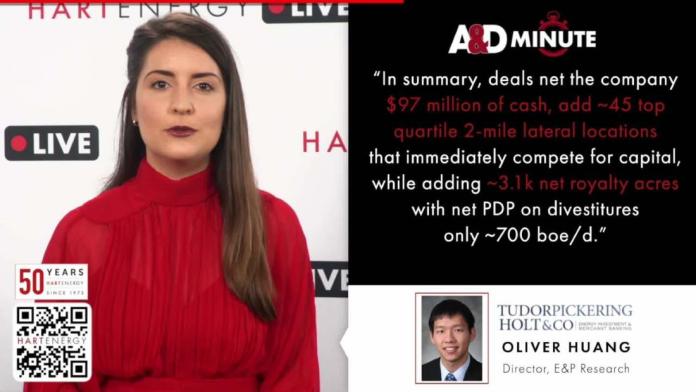 2023-01-25 - Also in this week's A&D Minute: Permian Resources' purchases and sales add up to nearly $300 million, plus see what private equity experts are saying about A&D this year.