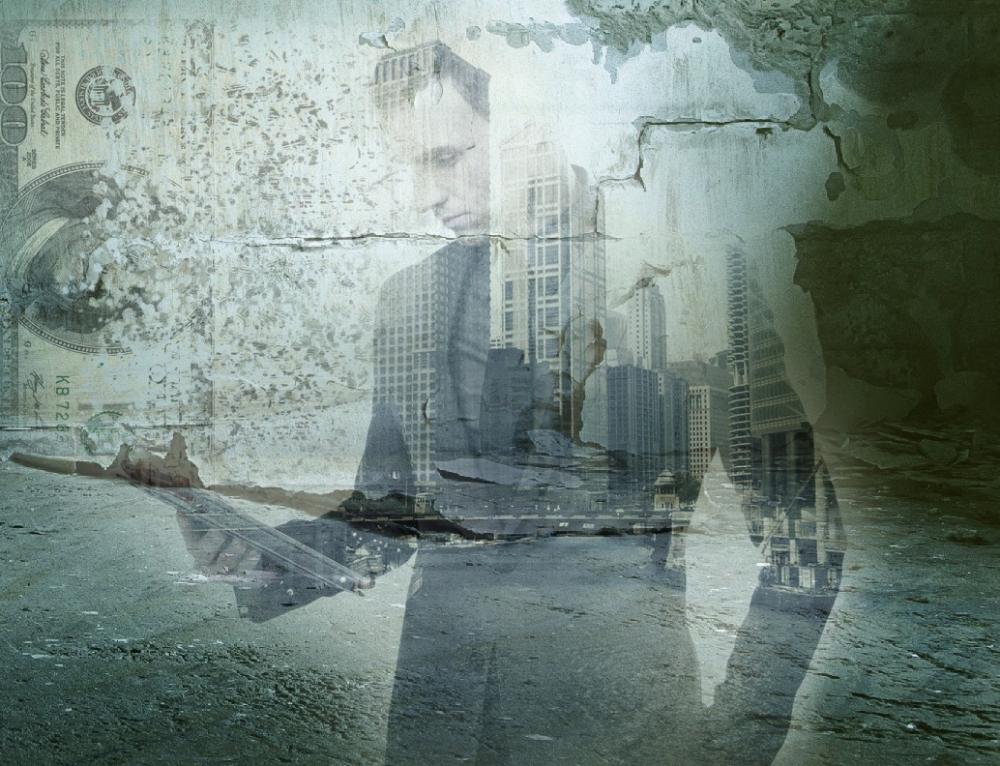 After fighting through 11 months of bad and then worse commodity prices, December brought a half dozen E&Ps to bankruptcy court with $4.2 billion in debt hanging over them.

On average, December debtors carried $705 million into bankruptcy court, including well-known operators such as Magnum Hunter Resources Corp. and Swift Energy Co. Both companies expect to emerge from restructuring under Chapter 11 as strong companies.

A maelstrom of debt, cash flow and low commodity prices formed in 2015 and now is expected to pull down even more companies in 2016.

A convergence of financial complications—borrowing base determinations, debt payments, more expensive capital and a tough sellers’ market—is now descending on oil and gas firms. Companies will have to choose between restructuring and trying to find a buyer for assets.

In short, for upstream companies, it’s a good time to buy assets and an equally hard time to sell for a fair price. Several analysts and other experts expect a modest to strong upswing in A&D activity.

Debt helped fund the U.S. shale revolution, which has altered the global oil trade and reopened U.S. exports. By July 2014, at least 20% of cash was generated by borrowing money because of insufficient cash flow. At the end of 2015, about 40 North American E&Ps had filed bankruptcy, dragging along a collective $17.2 billion in debt.

In mid-December, the Federal Reserve also increased interest rates by 0.25% to 0.5%, the first uptick in rates in a decade, based on signs of an improving labor market. While many expected the increase, it will have ramifications in the energy sector.

George Koutsonicolis, managing director at SOLIC Capital, told Hart Energy that in 2016 more companies will fall by the wayside. A quarter-point increase in interest rates will be felt down the road, especially when E&Ps have to refinance their debt. The Federal Reserve appears headed toward more rate increased through 2017, he said.

“It’s not the quarter point today, but the expectation of future interest rate increases over the next couple of years,” he said. “As these companies have to refinance debt, they’re going to have to buy at a higher cost of capital.”

Many E&Ps have refinanced debt for lower interest rates or long maturity dates. For the four quarters from July 2014 to June 2015, 83% of companies’ operating cash was being devoted to debt repayments, the U.S. Energy Information Administration said.

“They’re become a lot more risk averse, so there’s a flight to higher grade corporate credit as opposed to higher risk, high yield bonds,” he said. “At the end of the day what it spells out for the oil and gas sector is these highly leveraged companies with gross capital structures are going to find it much more difficult to refinance debt as it matures.”

Companies will likely begin feeling the need to restructure in the next six to eight months after borrowing base redeterminations at end of the year and in the first quarter. Koutsonicolis said companies’ borrowing bases, which are pegged to the price of oil, will shrink.

“Liquidity is drying up from that perspective as well,” he said. “I expect a lot of covenant defaults, as the year ends.”

Eagle Ford operator New Gulf Resources LLC, based in Tulsa, Okla., filed for bankruptcy in December with liabilities of more than $570 million.

To enhance liquidity, the company attempted to sell some of its assets, contacting more than 200 potential buyers and New Gulf received multiple bids, according to bankruptcy documents.

“Ultimately, however, New Gulf was unable to negotiate a price with any bidder that would have provided consideration sufficient to resolve the company’s impending liquidity and covenant constraints,” the company said in a court document.

Many assets should become available through bankruptcies or from companies trying to lessen pressure on their balance sheets. Asset-purchase opportunities await the energy space in 2016—provided companies want them and can afford them. 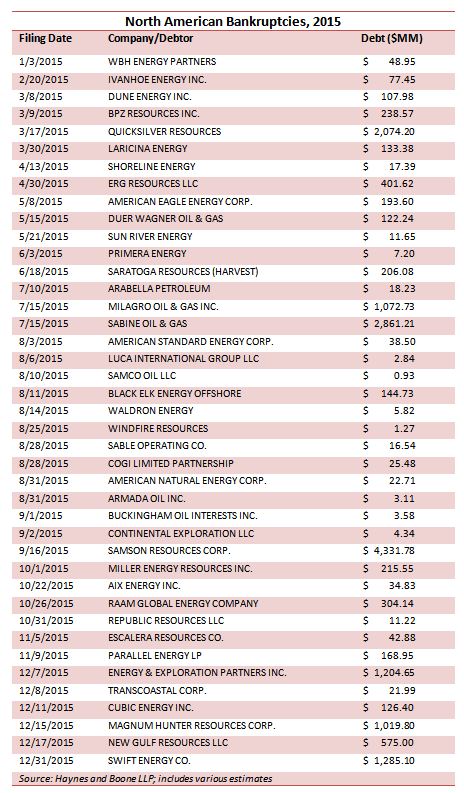 “Depending on the nature and attractiveness of the assets, bankruptcy is going to be a very realistic option,” Dewhurst said. “We are going to see a steep increase in the number of bankruptcies in 2016.”

Smaller companies will also look to consolidate in order to improve their financial strength and become more efficient.

Even large-cap E&Ps have signaled their intent to pick up the pace of divestitures to help balance sheets and liquidity.

In a Jan. 4 report, Moody’s said M&A and industry consolidation will increase, but by baby steps as the timing of commodity price recovery still remains a question.

“Industry stress will force many companies to sell assets to improve liquidity and financial leverage, and increased bankruptcy filings will facilitate more attractive asset valuations,” French said. “Many of the buyers will be either private equity-backed companies looking for low-cost entry points to deploy capital, or large, well-capitalized companies trying to build their portfolios.”

2022-11-21 - Not every nuclear plant that applied is getting funding in the initial phase of the program. Holtec International, which in May bought the Palisades nuclear plant in Michigan, said on Nov. 18 that DOE rejected its application for funding.