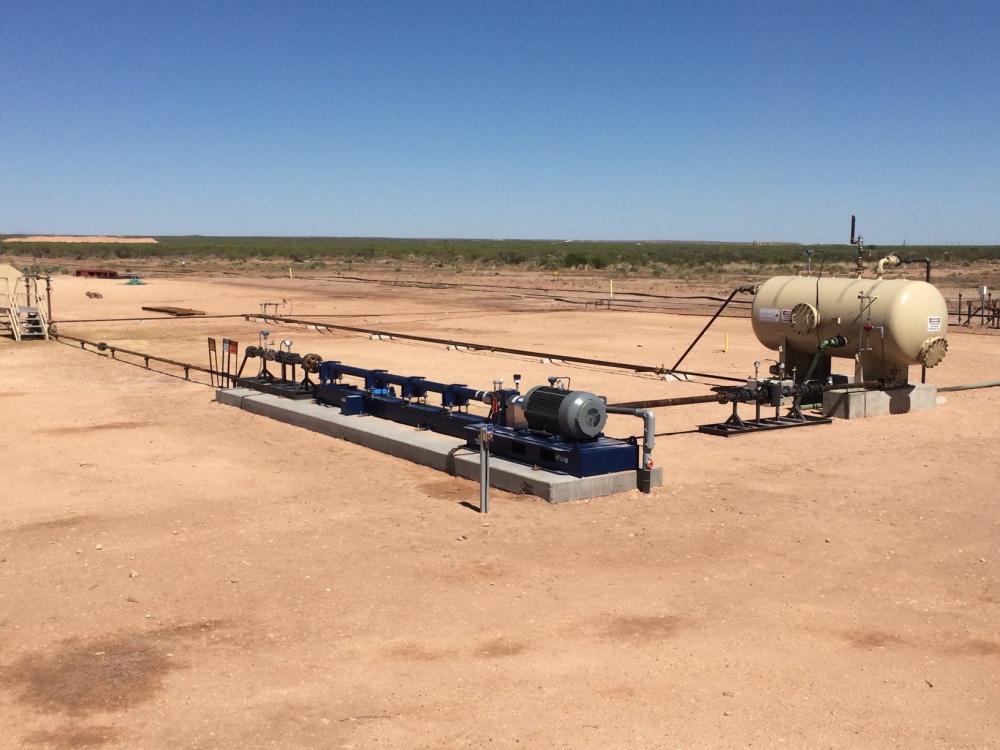 For well more than 100 years, the image of a pumpjack against the backdrop of a desert sunset has typified every oil field in the world. Over the last 10 years or so, however, shale plays have rewritten the playbook not only for completions but for production.

Below those topside images, today’s wells feature 90-degree turns, long laterals and copious amounts of abrasives such as frac fluid and sand. This is hardly conducive to the mechanics of the pumpjack, which feature long rodstrings and mechanical downhole pumps. Irregular holes lead to rod and casing wear. This combines with pump damage from sand to require multiple costly workovers, lost production and loss of profits.

A successful lift method for shale plays must eliminate as many moving parts as possible, both in the tubing and in the pump itself, while being reliable and cost-efficient, especially with today’s wild price dives.

One option gaining traction is the jet pump—with an important caveat. Today’s redesigned jet pumps, with more reliable surface power sources, are vastly more efficient and economical than those that met limited success in the 1980s and 1990s.

A jet pump uses the Venturi effect. This is a special case of Bernoulli’s principle stating that as fluid flows through a pipe with a constriction in it (nozzle), the fluid must speed up in the restriction, reducing its pressure and producing a vacuum. This vacuum brings formation fluids into the jet pump and to the surface. 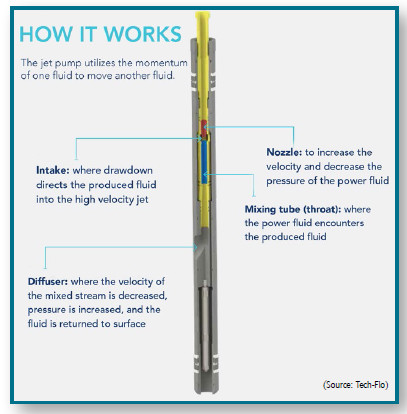 A jet pump uses a high-pressure fluid stream—usually produced water, but occasionally oil—to create a low-pressure situation at the intake (a Venturi), in effect, sucking in the oil and associated gas. At the surface, a process separates the fluids.

The jet pump itself has no moving parts, relying on a surface pump to move the fluid stream. With its small size and lack of moving parts, a jet pump is not affected by solids or gas locking and can be placed as deep as required by the well and formation. It rarely needs servicing and, when it does, it can easily be reversed out to replace the nozzle and mixing tube without the expense and downtime involved with a pulling unit.

One of the drawbacks to conventional jet pump installations, in many cases even today, has been the choice of surface pump. Traditional plunger/multiplex pumps require constant maintenance and often fail even if properly maintained. This leads to downtime and costly repair/ replacement scenarios.

As a result, Tech-Flo has moved to diaphragm PD pumps and H-pumps, multistage centrifugal electric submersible pumps (ESPs) on the surface. The cost of ownership of these pumps is much lower because H-pumps are more reliable and require maintenance only quarterly.

While H-pumps are slightly less efficient than plunger pumps, 70% compared to 95%, they more than make up the difference in reliability and lifting cost per barrel. The cost of the H-pumps themselves has dropped since about 2010, as an increase in competition has led to greater efficiencies in manufacturing.

Jet pumps and H-pumps are gaining acceptance in many other areas, so their use in production is also rising. Producers find jet pumps invaluable for frac flowback and fluid recovery because of its ability to handle solids and volatile gases. As the flow changes, it can be optimized quickly without a pulling unit.

For production, jet pumps can be set deep into the horizontal section at 45 to 70 degrees—a placement not optimal for rod pumps because the rod would wear against the tubing and for ESPs as they are rarely placed at that angle.

Its versatility is another benefit, especially with the rapid changes inherent in new wells. A jet pump can handle a well that kicks off at 4,000 bbl/d that may drop to 2,000 bbl/d in a few weeks. The service company simply changes the nozzle and mixing tube to optimize the dropping production rates. Hydraulic lift offers more versatility than virtually any other type of artificial lift system.

Jet pumps also lend themselves to hybrid jet pump/gas-lift installations in which the jet pump recovers the frac fluid until gas production becomes relevant. At that point, retrieving the jet pump by wireline is simple and cost-effective. The bottomhole assembly can be left in the wellbore. That way, if the well should later need to be put back on hydraulic lift due to offset fracs, disruption in gas production or compressor downtime, the operator can pump the jet pump back into position, either temporarily or long term—without the expense of a pulling unit.

In today’s oil price climate, cost reduction is at the top of every company’s wish list, as it was for a producer with a well in the Frio Formation near Galveston, Texas. The well’s rod pump faced operational and wellbore issues that cost the operator an average of $140,000/ year in pulling and repair costs.

The well had been completed to 6,800 ft with 5.5-inch casing. A severe deviation in the casing was the main issue, creating the damage but also limiting production. It produced 20 bbl/d and 260 bbl/d of water. Tech-Flo installed a jet pump system at a 20% cost reduction over the existing equipment. The producer had previously used a rail car separator with a suction leg installed for the surface pump’s suction, which eliminated the need for other separation equipment.

The jet pump boosted production to 28 bbl/d and 400 bbl/d of water using 70 mechanical horsepower. In the first year of installation, the jet pump system saved the producer $133,000 in service and repair costs.

Despite lower supplies, crude oil prices have fallen from a six-month high above $75 a bbl in April to below $63 on July 5, pressured by concern about slowing economic growth