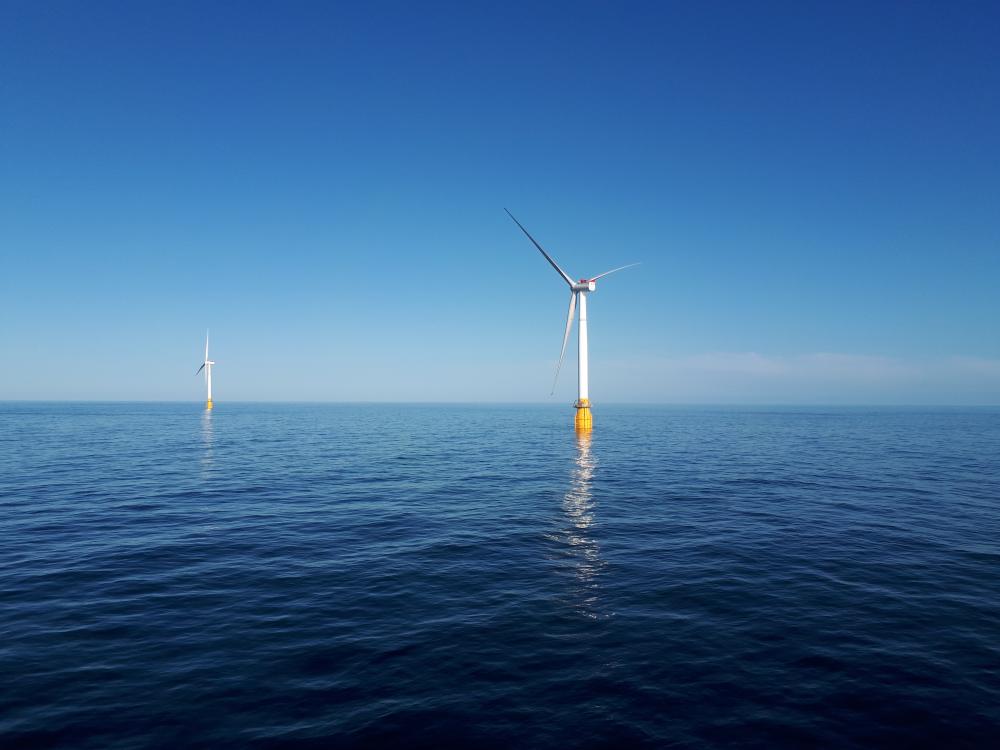 The Hywind Scotland Pilot Park has a capacity of 30 MW and comprises five 6-MW wind turbine generators connected through an inter-array cable network before feeding into a single export cable carrying energy back to land. (Source: Nexans)

[Editor's note: A version of this story appears in the July 2020 edition of E&P. It was originally posted July 1, 2020. Subscribe to the magazine here.]

Europe is the undisputed leader in offshore wind power, and wind farms in shallow waters are becoming more firmly established on its continental shorelines. But as the demand for more renewable energy continues to rise, the offshore wind industry is casting its technology net into deeper waters where wind availability is higher and more consistent. One potential solution is to adopt larger turbines on floating foundations, but this creates a technical challenge for the cables used to collect and export the power generated by floating windfarms.

The Hywind Demo, installed in the North Sea off Norway in 2009, was the world’s first full-scale floating wind turbine. Then the Hywind Scotland Pilot Park, commissioned in 2017, became the first operational floating wind farm in the world. Following a successful demonstration of its static and dynamic cables and associated accessories at the Norway site, Nexans was contracted to provide the cables for the project in Scotland, located 30 km off the coast of Aberdeenshire.

With a capacity of 30 MW, the farm comprises five 6-MW wind turbine generators connected through an inter-array cable network before feeding into a single export cable carrying energy back to land. The submarine cable systems, which had to be water-resistant and display dynamic maritime qualities, were engineered, tested, sealed off, prepared for pull-in and delivered in individual, installation-ready lengths.

Since then, other floating turbines have been deployed, and more projects are in the pipeline. These platforms demand dynamic, higher-capacity, deeper and longer submarine cables to connect with the grid collection point. Floating wind farm cables are also subject to hydrodynamic effects induced by waves and currents, so they require sufficient mechanical strength and fatigue life of their components compared to traditional static submarine power cables. They also require high precision during the cable-laying operations, where innovative and reliable accessories also need to be handled and installed.

Until now, most offshore wind power generation has utilized static power connections from turbines anchored to the seafloor in up to 50 m to 60 m of water. For anything deeper, fixed foundations are uneconomical or technically complex, and this requires the development of floating systems anchored to the seabed. However, forces from waves and currents can impose significant stresses on the power cables. These cables must be able to accommodate all movements and loading from the ocean in relation to the floating platform plus its own weight. Therefore, they have a significantly different performance specification from the type of cable used in shallow-water offshore wind farms.

From a geographical perspective, the potential for floating systems can be divided into two groups. The first would be in 100 m to 200 m waters, which would suit regions such as the Atlantic coast, the U.K. and the North Sea, while the second could be realistically designed for depths maybe five to 10 times greater. Areas such as the Mediterranean, the U.S. West Coast and Japan, where water gets extremely deep, would require deepwater systems.

Nexans is one of a few companies with an established track record in both high-voltage submarine cable systems and dynamic cables and power umbilicals, with current development projects aiming to bring the two disciplines together. A particular advantage is that it had already gained invaluable knowledge of the structural behavior of dynamic cables in umbilical projects for the deepwater oil and gas industry, with the first dynamic cable dating back to 1983.

The experience the company has gained from working on numerous oil and gas fields—from Norway to the Gulf of Mexico—has been expedient in developing cable and umbilical designs and perfecting manufacturing techniques. Nonetheless, there is still a technology gap that needs to be closed to efficiently carry the levels of power that the floating wind industry will require.

In oil and gas fields, when there is only a limited amount of power to transfer, very high voltages are not required. This means that medium-voltage systems are used, which have the advantage of being able to tolerate limited water or humidity ingress into the cable insulation.

An altogether different scenario presents itself, however, when the voltage increases to the high-voltage level needed for the export cable for a floating wind farm. Aside from needing a larger cable, it cannot tolerate any water or humidity getting into the insulation, thus necessitating the need for a water barrier. In static cabling, such a water barrier is accomplished by using a lead sheath extruded on the cable.

Unfortunately, a lead sheath can generally not tolerate the dynamic wave movement due to fatigue cracking. The challenge is to find suitable components and designs, capable of withstanding these movements during the lifetime of the cable. An option would be to employ a manufacturing process that allows the use of different materials to form the water barrier. Proposed solutions typically include either welding or lamination with a metallic foil sandwiched between polymer layers.

The key knowledge and technology gap, however, is to understand and predict the lifetime of these components, taking into account the operational loading conditions and environment. Testing and modeling is necessary to understand fatigue, corrosion and delamination, and this will enable the identification of materials that can resist these failure modes.

Heating is a natural result when a cable carries electrical power. As the current (and therefore power) increases, so does the heat generated. When designing an AC cable, the aim is for the temperature of the copper conductor to not exceed 90 C. Designers have to add items such as bend stiffeners, buoyancy modules and so on, while making sure the temperature is always regulated. Fortunately, seawater proves to be a great collaborator, as it has a strong cooling effect that can dissipate temperature from the outer body.

Numerous power cables, most notably 3-core submarine cables, feature optical fibers. At a negligible added cost, this is an efficient way to enable end-to-end communication and eventually to detect whether any part of the cable suffers stress or a spike in local temperature, so preventive maintenance actions can be undertaken.

The turntable allows either two cables to be installed in a bundle or a single long length of cable weighing 10,000 tonnes. A significant technical advantage is that it will minimize offshore jointing. When launched, Nexans Aurora will incorporate the world’s largest offshore carousel. Delivery is scheduled for 2021.