More partnerships are forming as companies in the energy sector opt to work together to achieve decarbonization goals.

This week saw news of geothermal collaborations between Chevron New Energies and Mitsui Oil Exploration Co. Ltd. and between Transitional Energy and ElectraTherm.

“The lithium-ion battery market is expected to grow exponentially over the next several years, with a projected market size approaching $25 billion by 2028,” Cirba Solutions President and CEO David Klanecky said. “Federal incentives for the purchase of EVs (electric vehicles), requirements for domestic EV battery manufacturing included in the Inflation Reduction Act, and state requirements like California’s recent move to require all new vehicles sold in the state to be zero-emission by 2035, ensure that lithium-ion battery recycling will be critical for auto-manufacturers to meet demand and have a sustainable future.

Expected to begin operations in mid-2023, the facility will process enough battery material to support 50,000 EVs annually, the company said.

Norwegian project developer HENT has entered an agreement with FREYR, a battery cell producer, to build a battery factory in Norway, the companies said Sept. 30.

Called Giga Arctic, the 120,000-sq-m facility will be located in the Mo Industrial Park.

HENT’s role will include construction, technical installations and related infrastructure, according to a news release.

“With HENT now at the helm of constructing Giga Arctic, we expect to be well-positioned to meet our targets for clean battery production,” said Einar Kilde, executive vice president of project execution for FREYR. “We selected HENT as our partner on this journey due to their great track record in building and developing large and complex facilities, as well as their work with us so far on Giga Arctic.”

The two companies signed in December 2021 an initial collaboration agreement covering the first stage of development for the factory. The latest agreement kicks off the second phase, which includes construction of the plant.

Units of Argentina’s state oil firm YPF will next month begin lithium exploration in a first-ever entry into the sector by state-run miners as the government aims to benefit from surging demand for the battery metal, according to a statement on Sept. 26.

Lithium prices have soared past $70,000 per tonne this year as the major automakers scramble to secure more supply of the ultra-light metal to shift production from fossil fuel-burning engines to electric-powered vehicles.

YPF lithium units, YPF Litio and Y-TEC, announced in a statement on Sept 26 the start of work on a 20,000-hectare area lithium prospecting project in Fiambala in western Catamarca province, a partnership with local mining firm Catamarca Minera y Energetica. The project seeks to identify the highest lithium concentrations in Fiambala salt flats.

The statement did not disclose how much they would invest in the project or the expected duration of the exploration phase.

HPCL-Mittal Energy to Start Up Bio-ethanol Plant in 2023

India’s HPCL-Mittal Energy Ltd. will start up a bio-ethanol plant at its Bathinda refinery in northern India in 2023 as part of measures to reduce its carbon emissions, a company official said Sept. 28.

“Our company is in the process of constructing 100,000 tonnes per annum ethanol plant based on agricultural inputs like waste food,” Pravin Shirke, assistant general manager at HPCL-Mittal Energy Ltd. (HMEL), said during a forum at the Asia Pacific Petroleum Conference.

The plant will be operational next year, he added.

India, the world’s third-biggest oil importer and consumer, has expanded the excise duty exemption for biofuels to encourage the blending of higher proportions of ethanol and components of vegetable oil with gasoline and diesel.

India plans to introduce 20% ethanol blending with gasoline in some parts of the country from April next year, followed by a nationwide rollout from 2025-26.

Through the agreement, the two companies will explore the technical and commercial feasibility of Japan’s advanced geothermal power capabilities through studying resource potential and evaluating the advanced closed loop (ACL) technology’s effectiveness for a future pilot program.

The companies could also assess the implementation of ACL-based advanced geothermal technology opportunities on a global scale.

ACL has the ability to enable access to geothermal resources at a wider range of temperatures and geologies with the use of alternative technology above and below the surface, differentiating it from conventional geothermal projects that use traditional steam turbines.

When complete, the two-well project is expected to deliver about 42,000 megawatt-hour (MWh) of baseload renewable electricity per year, enough to power around 11,000 UK homes, according to GEL.

The latest news comes after GEL secured planning permission for its second deep geothermal site at Penhallow, estimated to generate about 5 megawatt (MW) of baseload electricity and 20 MW of thermal heat to meet local demand, according to a news release.

The 4,500-m deep first well will bring naturally heated water to the surface, while the 3,000-m deep second well will be used to return the cooled fluid back underground after it has been used to produce electricity and heat, Thrive said in the release.

Plans are for construction to begin in 2023 with generation expected in 2026.

Colorado-based geothermal company Transitional Energy and ElectraTherm have agreed to team up to convert waste heat to power in the oil and gas industry.

The letter of intent to partner announced Sept. 28 comes after the two worked together on a successful pilot project of Transitional’s Sedna Sled Geothermal System using ElectraTherm's Organic Rankine Cycle (ORC) equipment. The project took place earlier this year at an oil field in Nevada.

Transitional is using a proprietary system utilizing ElectraTherm’s equipment to generate power. The power come from thermal energy from operations at oil fields.

“We value collaboration at Transitional Energy and working more strategically with ElectraTherm will allow us to bring greater value to our customers,” Transitional Energy CEO Salina Derichsweiler said. “We believe integration of ideas will be the solution to energy insecurity and emission reductions.”

Expected to produce 3.2 gigawatt (GW) by 2027, HyMed will be located in ultradeepwater offshore Italy, the developers said Sept. 26. It will also serve as a template for future offshore renewable projects.

Aquaterra will provide engineering and green hydrogen production expertise to the project, currently in the first phase of permitting, while Seawind will lend its expertise in floating offshore wind technology.

“The project will enable Aquaterra Energy to build on expertise established through its previous work on a fully-scalable offshore green hydrogen production model,” Aquaterra said in the release, “and apply it to Seawind’s unique approach to floating offshore wind, which could significantly accelerate the production process.

Of the 3.2 GW of initial production, more than 1 GW will be green hydrogen that will be taken onshore via pipeline or by vessels to global markets.

“Hydrogen is at the heart of the energy transition in Europe and this project will leverage the wind electricity and hydrogen markets, starting in Italy,” Aquaterra said.

The Neptune Energy and RWE H2opZee consortium has awarded contracts to wind turbine manufacturer Siemens Gamesa and Dutch engineering contractors H2SEA and Enersea for its green hydrogen project in the North Sea.

The contracts became effective in August and are part of the project’s technical feasibility study, Neptune said in a news release Sept. 27. The study, which marks the project’s first phase, involves evaluation of different technical concepts and potential development locations.

H2SEA landed the offshore platform design and engineering contract, while Enersea was chosen for the pipeline concept design with Siemens Gamesa selected for the wind turbine generator systems concept work.

The consortium said it is also working with offshore infrastructure owners to evaluate export options via the existing pipeline network to shore.

The project will be implemented in the second phase, according to the release. H2opZee aims to build 300 to 500 MW electrolyzer capacity in the North Sea before 2030 to produce green hydrogen, powered by an offshore wind park. The hydrogen will be transported to land via pipeline. 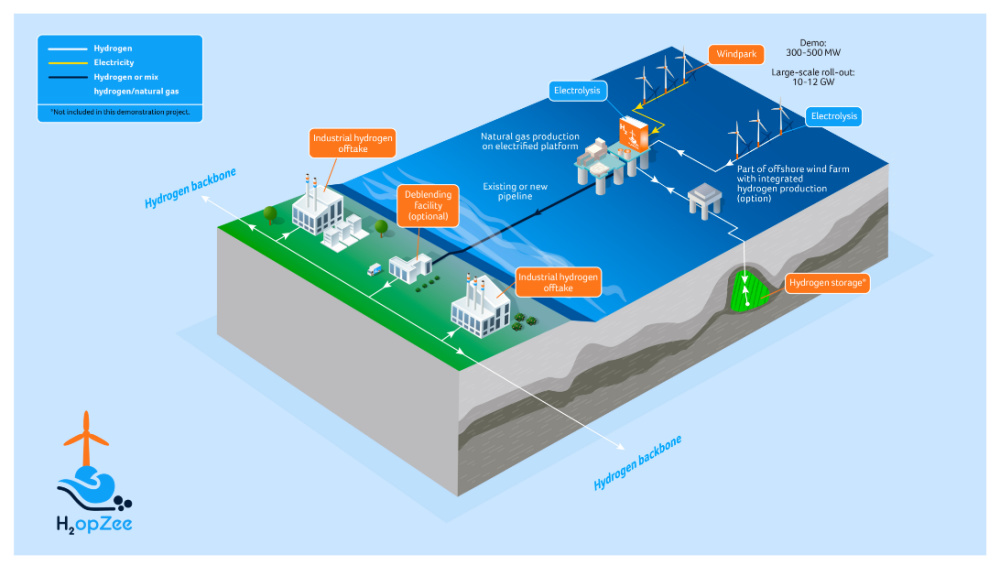 Energy infrastructure company Tallgrass and Equinor are working together to find opportunities to develop hydrogen and ammonia projects in North America, the two said Sept. 27.

The collaboration comes as part of the companies’ decarbonization efforts.

As part of the process, the companies will assess production and market potential for large-scale, low-carbon projects. They have also agreed to co-develop activities, including a FEED study focused on hydrogen production. They aim to capture at least 95% of the CO₂ for permanent sequestration coupled with ammonia for efficient transportation and storage, the release stated.

Multiple regional energy centers in the U.S. will be evaluated.

“The magnitude of annual emissions reductions from our potential regional energy centers equates to eliminating the CO₂ emissions of over one-third of the total automobiles on the road in states as populous as Colorado, Arizona, and Massachusetts,” Tallgrass Segment President Dustin Bashford said in the release. “It is this type of meaningful decarbonization that we are committed to rapidly advancing.”

Shell is one of the most influential oil producers in Africa, but the Daystar purchase is its first power acquisition on the continent, underscoring its mandate to cut its greenhouse-gas emissions in half by 2030.

“As we do this, we’re helping to address a critical energy gap for many who currently rely on diesel generators for backup power,” Thomas Brostrøm, Shell’s vice president for renewable generation, said in a statement.

Neither Shell nor Daystar commented on the sale price. Shell earmarked $2 billion-$3 billion in capital expenditure for renewables and energy solutions in 2022.

Daystar, headquartered in Lagos, provides off-grid power to commercial and industrial clients in Nigeria, Ghana, Togo and Senegal, offering solar and hybrid power solutions with battery storage. It has 300 power installations with installed solar capacity of 32 MW but aims to boost capacity to 400 MW by 2025.

Swedish utility Vattenfall has obtained the rights to develop a large offshore wind farm project in the German part of the North Sea, which could start operations in 2027, it said Sept. 29.

Vattenfall had purchased the project previously known as “Global Tech II” in 2016, although a new offshore wind tendering system in Germany required it to confirm its intention to retain the rights, the company said.

“This is an important milestone for us in Germany as the government aims to increase generation of electricity from offshore wind to 30 gigawatt by 2030,” Catrin Jung, head of offshore wind at Vattenfall, said in a statement.

The wind farm off the coast of the North Sea island of Borkum would have a capacity of 980 MW, corresponding to the consumption of more than one million German households, the company said.

Vattenfall still has to make a final investment decision.