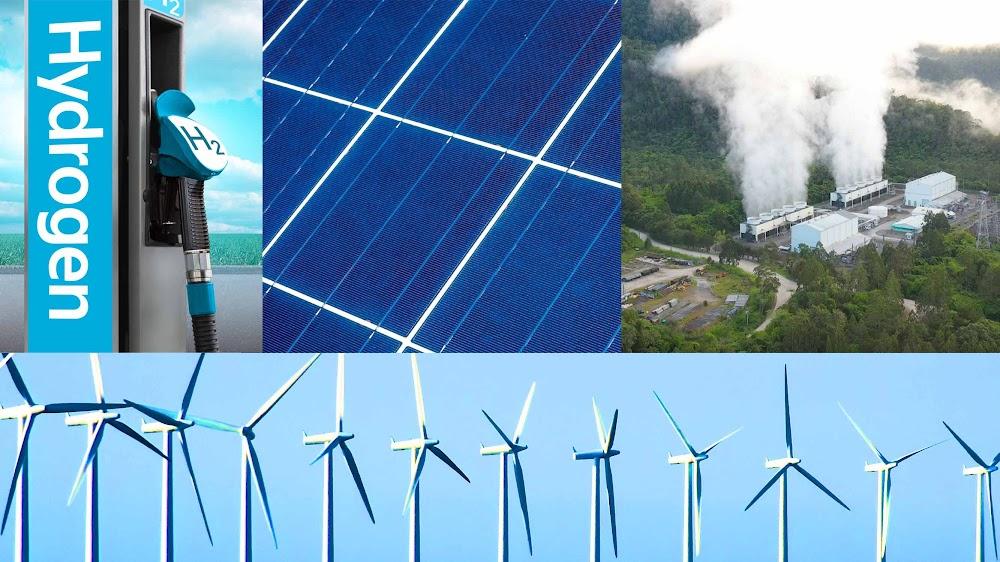 More partnerships formed this week as companies agreed to work together on projects that include using recycled battery material and more projects to develop green hydrogen.

A closed-loop supply of lithium-ion battery materials could be in the making after Ascend Elements and South Korea’s EcoPro Group formed a partnership.

Avangrid has also teamed up with Sempra Infrastructure to potentially develop green hydrogen and ammonia projects in the U.S. and an engineer contractor was selected for Controlled Thermal Resources’s $1 billion program to recover lithium from subsurface geothermal brine in Imperial County, California.

A ‘circular battery economy’ could be in the making with a partnership formed by battery recycler Ascend Elements and EcoPro Group, a South Korean battery materials company.

The two companies said Oct. 12 they will work together to develop, qualify and integrate recycled battery materials into EcoPro’s cathode products.

Comprised of lithium and metal, cathode active materials (CAM) help define a battery’s capacity and power. Ascend uses a process called Hydro-to-Cathode to transform the end-of-life battery waste, or black mass, into a sustainable battery precursor and CAM. The company said the process is capable of recovering up to 98% of critical battery elements.

As part of the agreement, Ascend will supply recycled battery materials to EcoPro, which plans to convert the materials into cathode active material for the company’s battery manufacturing clients, according to a news release.

“This is one of the first North American examples of a truly circular battery economy," Ascend Elements CEO Michael O’Kronley said in the release. "Currently, battery manufacturing scrap is the largest source of lithium-ion battery materials available for recycling. We’re not only recycling this scrap material and keeping it out landfills, we’re elevating the value of the material by engineering it to meet EcoPro’s precise specifications.”

The agreement could establish a closed-loop supply of lithium-ion battery materials in the U.S.

“By closing the loop to reuse the materials for new cathode active materials production is the key component for a greener future,” said Sangwook Park, strategic planning vice president for EcoPro. “Partnering with Ascend Elements, beginning in 2023, for pre-treatment of upstream materials in North America is a step closer to achieving our goals.”

ACC, a joint venture of Stellantis, Mercedes Benz and TotalEnergies, has a plan worth over $6.79 billion to build the three gigafactories with a capacity of 40 gigawatt hours (GWh) each by 2030, to support the growing production of electrified vehicles.

Under the deal, Siemens will become ACC’s preferred supplier for automation, digitalization and electrification technology.

Terms of the partnership, which is part of the Siemens Xcelerator open digital platform launched earlier this year, have not been revealed.

The cloud-based platform, which will feature hardware, software and digital services, is part of Siemens’ ambition to grow its digital business by 10% per year from the $5.89 billion generated in 2021.

Siemens will give ACC access to its digital enterprise portfolio of hardware and software, from production design to product design, from product lifecycle management to energy management systems.

Australia’s Lake Resources said on Oct. 12 it had signed a deal with South Korean battery maker SK On Co. Ltd. to supply lithium from its flagship Kachi project in Argentina.

SK On, a unit of SK Innovation, will acquire a 10% stake in New South Wales-based lithium developer Lake Resources as part of the agreement. SK Innovation is a part of South Korea’s second-largest conglomerate SK Group.

Lake Resources said it would supply 25,000 tonnes per annum (tpa) of lithium to SK On under the five-year deal, which could be extended for another five years.

The deal marks a further move by the world’s fourth largest carmaker to lock down supplies of metals needed for batteries that power EV cars, ahead of an expected surge in global demand as a transition towards cleaner mobility gains traction.

The supply will come from a nickel and cobalt advanced mining project in Western Australia called NiWest, which GME is currently developing, with a planned production of around 90,000 tonnes per year of battery-grade nickel and cobalt sulfate.

A feasibility study for NiWest is due to start this month, the companies said.

Stellantis, the owner of brands including Jeep, Peugeot, Fiat, Citroen, Maserati and Opel, has pledged to make up 100% of its sales in Europe and 50% of its sales in the U.S. from battery electric vehicles by 2030.

The company said its ethanol-to-jet fuel process can lower greenhouse gas emissions by 80% on a total lifecycle basis, compared to petroleum-jet fuel, depending on the type of ethanol feedstock used.

The Biden administration in 2021 challenged the fuel supply sector to produce at least 3 billion gallons of SAF annually by 2030 and cut aviation emissions by 20%. The ultimate goal is for SAF to meet the entire fuel demand of the U.S. aviation sector by 2050.

The 33-MW project will provide enough energy to power 13,559 Southern California homes per year and avoid 21,005 metric tons of greenhouse-gas emissions each year.

“Fervo is making geothermal energy economic and scalable. This once-niche solution is becoming an increasingly indispensable part of the clean energy transition,” Dawn Owens, head of development at Fervo, said in the release. “Fervo is thrilled to bring this solution to CPA’s millions of Southern California residential and business customers.”

Hargrove Engineers & Constructors has been selected as engineer contractor by Controlled Thermal Resources (CTR) for its $1 billion program to recover lithium from subsurface geothermal brine in Imperial County, California, according to a news release.

CTR aims to produce 49.9 MW of renewable power and 25,000 metric tons of lithium hydroxide from the first stage of its Hell’s Kitchen project in Southern California’s Salton Sea Geothermal Field. The project could produce 1,100 MW of baseload renewable power and about 300,000 metric tons of lithium carbonate equivalent products per year, CTR said.

“Direct lithium recovery from geothermal brines is a positive industry disruptor as it uses a closed-loop process to sustainably recover lithium and return brine to the geothermal reservoir deep beneath the earth,” the release stated. “This method utilizes 100% renewable power and steam to produce battery-grade lithium products in one location—with a close-to-zero carbon footprint.”

Currently, the third stage of FEED work is underway by Hargrove. Detail design in preparation for the start of construction is expected in 2023.

Iberdrola Group member Avangrid has partnered with Sempra Infrastructure for the “potential joint development” of green hydrogen and ammonia projects in the U.S., an Oct. 12 news release stated.

The two companies entered a non-binding heads of agreement to identify, appraise, and potentially develop large-scale green hydrogen projects as the world looks to decarbonize. Development of such projects, they warned, depends on risks and uncertainties, including reaching definitive agreements, securing permits and reaching final investment decisions for each project.

“The U.S. is facing unprecedented challenges and opportunities to develop competitive solutions that meet its growing energy needs, while also aiming to transition to a cleaner and more sustainable energy future,” Avangrid CEO Pedro Azagra said.

Sites in Victoria County, Texas, and Payne and Lincoln County, Oklahoma are in the running for a nearly $6 billion crude refinery that would include a hydrogen complex, according to a news release Oct. 10.

Powered 100% by renewable energy, the refinery complex is expected to reduce and eliminate 95% of greenhouse-gas emissions, and reduce water production and consumption by 90%, with 80% further recycled and repurposed, the release stated. Developers aim to produce nearly 92 MMbbl of cleaner transportation fuels including gasoline, diesel, and jet fuel from crudes sourced domestically from the Eagle Ford, Permian, Denver-Julesburg (D-J) and Bakken basins.

Instead of consuming natural gas in process heating units, PEP said it would combine pure oxygen with blue hydrogen and green hydrogen (from electrolysis).

Construction is expected to begin in 2023.

Comprised of Italian energy companies Eni and Enel Green Power, the joint venture will use the funds to advance the decarbonization of refineries in both Italy and Canada.

“In order to tackle the challenges of energy transition as effectively as possible in such diverse and complex economies and industries, it is essential to use all available technologies to decarbonize the many different emissions sources,” Eni COO of Energy Evolution Giuseppe Ricci said in the release.

“Hydrogen is one of the many paths that Eni is taking, and we are very pleased that these projects with Enel were shortlisted by the European Union as part of IPCEI Hy2Use, which is such an important EU project,” he continued.

The government of Panama and energy companies, including SGP BioEnergy, announced Oct. 11 that they will add green hydrogen production to an advanced biorefinery in development.

The facility plans to refine 180,000 bbl/d of biofuels, including SAF, and generate 405,000 metric tons of green hydrogen annually. Producing green hydrogen will allow the facility to operate with net-zero emissions, SGP BioEnergy said in a news release.

The airline industry is harder to decarbonize than other types of transportation, so a massive ramp-up in SAF output will be needed for aviation to reach net-zero emissions.

SGP BioEnergy first announced the plan for the facility, located in Colon and Balboa, Panama, in May.

Construction is set to begin in 2023. For the project, SGP BioEnergy will work with Topsoe Sustainable Aviation Fuel to produce green hydrogen from waste carbon and renewable fuels by-products produced during refining, the release said.

Operated by Eni’s Plentitude, the wind farm has 19 GE wind turbines and is expected to produce about 300 GWh per year, which Eni said is equivalent to the domestic consumption of 100,000 households.

“El Monte wind farm will contribute to the gradual decarbonization of the electricity sector in Spain, contributing to the energy transition process undertaken by Eni and to Plenitude’s ambitious goals of achieving carbon neutrality by 2040 and supplying 100% decarbonized energy to all its customers,” Plentitude CEO Stefano Goberti said in the news release.

The company, he said, targets more than 2 GW of installed capacity from renewable sources by year-end 2022, aiming for over 15 GW by 2030.