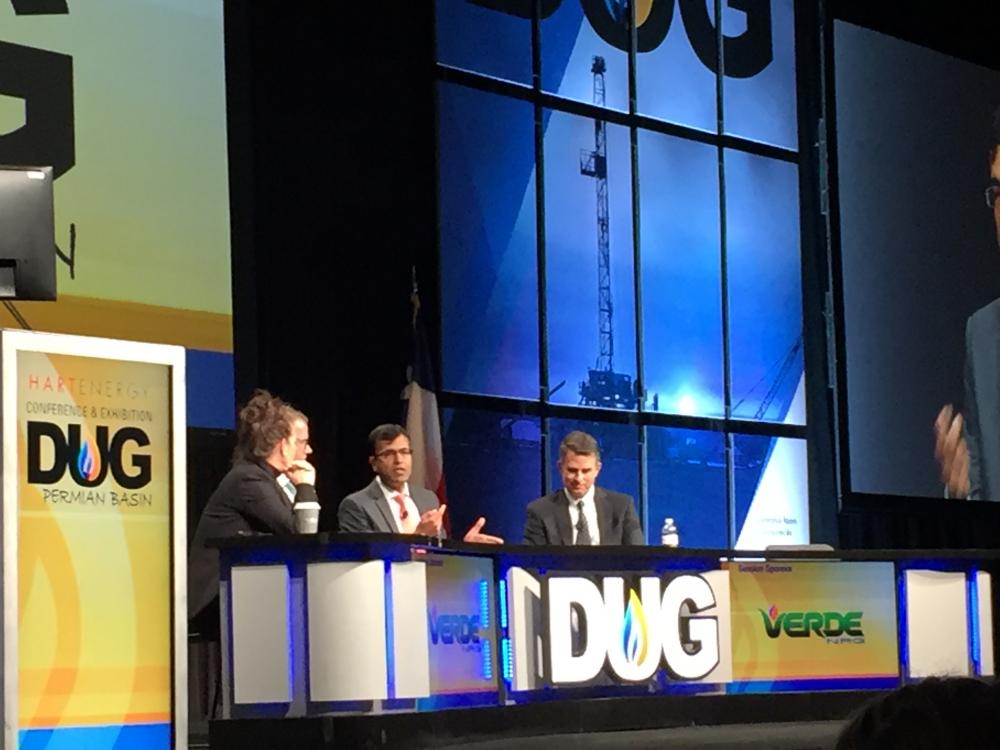 FORT WORTH, Texas—Some call it, “OPEC’s worst nightmare.” No, not a Trump tweet storm about oil prices, but rather the crude production in the Permian Basin. “The prolific Permian Basin is producing more than 4 million barrels per day. That’s more than any OPEC country except Saudi Arabia,” said Steve Toon, editor-in-chief of Oil and Gas Investor magazine and the host for the 14th edition of Hart Energy’s DUG Permian Basin at the Fort Worth Convention Center April 16.

“And, there’s more to come,” Toon continued, pointing out that the Permian’s growth is likely to increase even more now that the oil majors such as Chevron and Shell have made inroads into the basin.

Meanwhile, investor apathy weighs on the industry. Drillinginfo’s Allen Gillmore said the public and private markets preference for cash flow. He said Wall Street is not giving E&Ps much credit for undeveloped land.

More than 2,000 industry professionals gathered for the second day of the conference, which kicked off on April 15 with a trio of tracks aimed at some of the basin’s most pressing issues: sand, produced water, and mineral rights.

Rob MacAskie, Zarvona Energy, opened the afternoon sessions with a look at the opportunities in the lower Barnett Shale, which he said is an emerging play in the basin. Currently, there are 20 horizontal lower Barnett well producing, according to MacAskie.

He said tracer in a Zarvona discovery well in south Andrews County indicated that the opportunity in the lower Barnett wells for 10 to 15 barrels per stage for a two-mile lateral.

Devon Energy’s Justin Porter discussed the company’s position in the Delaware Basin. Porter said the “new” Devon has moved away from the Barnett Shale and is concentrating on the Delaware, Eagle Ford, Stack and Powder River. “We believe the Delaware is the best of them,” he said.

“We are really focused in Lea and Eddy counties in New Mexico,” he said.

Parker Reese, Ameredev II, said investors are concerned both about the future of the oil business in light of climate change and the industry’s poor record of generating free cash flow.

QEP Resources is looking at tank development as its strategy to mitigate the problems encountered with high-density parent/child well drilling, said Jill Thompson.

Tank development is the exploitation of a volume of rock at one time in order to mazimize reservoir potential.

He said he’s excited that Admiral has taken an area the dubiously thought of and is now at full pad development.

Ryan Keys, who co-founded Triple Crown Resources in 2017, said E&P companies are not doing a good job of communicating its value proposition to generalist investors. He said the current sentiment in the investment world in that the oil and gas companies are a bit of a pariah.

He added that the full cycle returns are what the generalist investor is interested in.

Among the topics he discussed was Plains All-American’s executive transition, early retirement, and the growth of Plains. He offered that he thinks oil production in the Permian will creep up to 7 million barrels per day over the next five years.

Joseph Markman will have more details on HartEnergy.com.

U.S. was built on the efforts of wildcatters. One of the earliest in the shale game, Floyd Wilson, now with Falconer Oil & Gas, addressed the crowd with a look at the changing nature of the game in U.S. shale.

“Today in our industry, early wildcatting efforts have been replaced by technological advancement,” Wilson said during the opening keynote. “We’re still wildcatting, just in a modern way. We are finding new frontiers and we are tripping over them every day.”

Wilson allowed that a big difference in the basin these days is need for investment and the realities that come with it. “Money always comes with the expectation of reasonable return,” he said.

He added that operating within cashflow, a common demand from investors, is difficult in shale exploration, but there’s no way around it.

“It can’t really be done in the shale business in the early stages,” he said of operating within cashflow. “It can be over time, however.”

Mike Wichterich, Three Rivers, addressed the question many people have right now. When will public capital return to oil and gas? While he didn’t offer they answer, he did point out the issue.

“Wall Street hates us right now. We are sitting in limbo, but you know that,” he told the audience. “When will Wall Street come back?”

He pointed out that, “They don’t care about making money. They care about beating the S&P 500. Our industry doesn’t have a history of doing that,” he said.

But the panelists on the dealmaking panel, also including Kaes Van’t Hof, Diamondback Energy, and Mohit Singh, BPX Energy, agreed that there is hope. Specifically, they pointed out to last Friday’s Chevron deal for Anadarko Petroleum as a good sign for the Permian Basin and the industry as a whole.

“It’s a great sign for M&A,” he continued. “That’s what drives A&D, a healthy equity market.”

Singh said the landscape is changed now and he expect the A&D market to look different at this time next year.

Singh also gave an update on BPX’s onboarding of the BHP assets it purchased last year. The company took over the assets on March 1. Singh said the acquisition gives it a Permian position and that the company will focus on the Permian Basin, Eagle Ford, and Haynesville. Everything else will be sold.

The U.S. production potential surprised OPEC, said Tom Petrie, Petrie Partners, in a talk about geopolitics. He said the U.S. oil production is at almost 12 million barrels per day and quite possibly still growing.

“It’s likely to provide a challenge to both Russia and Saudi Arabia, an extraordinary event,” Petrie said.

He said Russia and Saudi Arabia need oil price to be at $80 per barrel when you look at all of the economics. The U.S remains competitive at $65 or higher. Petrie said OPEC’s viability is increasingly questionable below $50.