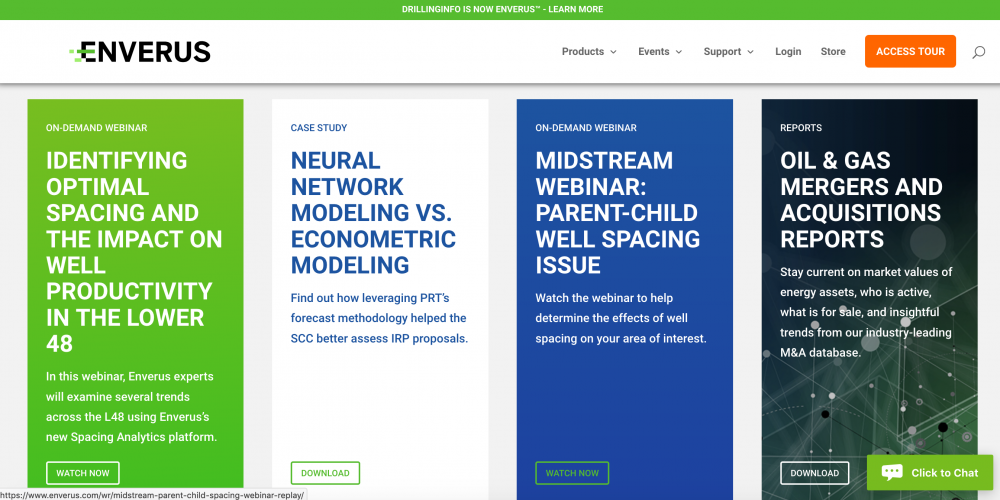 Over the last two decades Drillinginfo has grown into one of the better known brands in the oil and gas industry. What was started 20 years ago by a bunch of “oil patch kids” has become a go-to source of energy data analytics and has now surpassed $300 million in annual recurring revenue. While none of that will change, the company’s name will as it looks to the future of energy and its place across multiple businesses.

The company announced Aug. 22 it has changed its name to Enverus, a combination of words representing its roots in energy (En), its purpose to bring clarity and truth (ver) and its growing U.S. partnerships (us), according to the company. Enverus will have three business units and the original Drillinginfo name won’t completely disappear. The three units are Enverus Drillinginfo, Enverus Trading & Risk and Enverus Business Automation.

Co-founder and visionary Allen Gilmer told HartEnergy.com in an interview prior to the announcement that while Drillinginfo as a brand grew into far more than he expected when he wrote it, the new name better represents the full scope of the company’s work.

“If we’re being completely objective, and I think I can be because I made up the name, Drillinginfo is a pretty bad name to begin with, especially from the fact that when we started we didn’t really have any information on drilling, per se, other than permits,” Gilmer said. “But, we built it into a brand that was a very valuable brand. It had much bigger cache than we probably ever thought when we started the business.”

Since then the company has accelerated its moves into adjacent spaces such as trading and risk and business automation and Gilmer said, “Our very positive brand limited what people thought we were.

“We were in a conversation with a CEO of a very substantial company and he said, ‘You should change the name of your company. I always just looked as you as a place where we got our data,’” Gilmer continued.

The CEO apparently didn’t realize he depended on Drillinginfo for many broad services.

“Like everything in life, your biggest strength sometimes is a real foil as well,” Gilmer said.

The change was a long time in coming. Gilmer said the company started thinking about it in 2012. He pointed to acquisitions of business automation companies Oildex, Cortex and Red Dog as catalysts to the beginning of the name change. “We acquired so many companies it was hard to keep the concept of ‘one team’.”

Enverus expects to keep growing, too. “Our growth has been aligned with our strategic plans,” Gilmer said. “We have a partner, Genstar Capital, allowing us to inorganically achieve some of these growths that take a long time, things that we look at and think we could really supercharge our strategic plan if we could go acquire it.”

“The vision was always to build a company that created uniquely valuable data through active connections between businesses in the energy industry. We now operate the largest such system of active networks that has ever existed, and its growing rapidly,” said Enverus CEO and President Jeff Hughes in a statement.

A lot has changed in the industry since Drillinginfo was founded at a time when unconventional oil and gas was, well, still unconventional and digital solutions were just coming to prominence.

“When we started the company, the oil business was the oil business and we knew it was going to grow X percent every year, and if you were going to go start a pipe business or this, that or the other, you kind of knew what you were going to get,” Gilmer said. “Today, we live in a very dynamic world in which oil and gas is competing with more subsidized energy. Everybody has to be much more aware of the environment in which they’re operating so as to not make critical mistakes.”

As for any concerns about the name change, Gilmer admits the Drillinginfo brand is strong but the change is really driven by customer views already. “The times when we were able to get into the c-suite of clients and they see the breadth and scope of what we are doing, they were basically telling us they welcomed the change,” Gilmer said. “It’s not what you’d consider your dad’s old Drillinginfo.”

Here’s a look at the impact Halliburton’s ESTMZ system has had on the way that completions are performed and a new system that specifically addresses the increasing demands of the Gulf of Mexico Lower Tertiary.