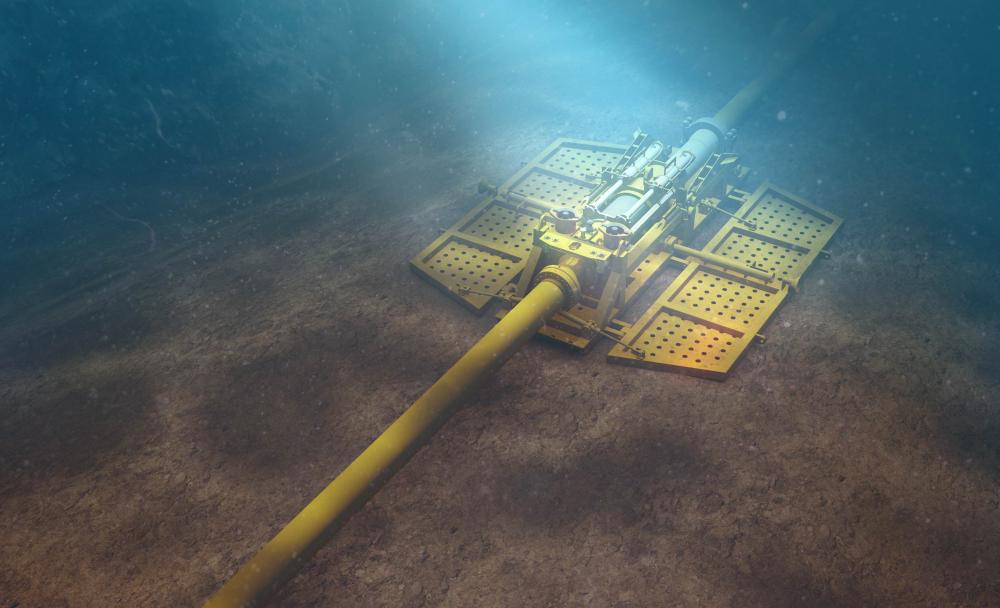 Novel use of diverless connections in construction of a shallow subsea tieback offshore Malaysia cut costs by approximately 20% while improving safety and reducing the project’s carbon footprint. A key project component was a Stinger Deployed Diverless Connector (SDDC) developed in a partnership between AFGlobal and pipeline contractor Cortez Subsea.

The greater Tembikai development comprises a central processing platform connected to a floating storage and offloading vessel via a flexible subsea pipeline. The field development is operated by Petronas Carigali unit Vestigo Petroleum, which awarded the pipeline system contract to Alam Martime in partnership with Cortez Subsea. The recent tieback connected a new wellhead platform to the Berantai FPSO and involved laying 36 miles of 12-inch rigid pipeline in approximately 230 ft of water.

Success of the project introduces a cost-effective capability for single well, shallow-water step-outs and tiebacks, and it suggests new capabilities and efficiencies for deepwater applications. The advance is central to industry efforts to develop small and stranded fields. In addition to monetizing and adding value to Malaysian assets, the technology has applications in many other offshore theaters including the larger Asia-Pacific area, West Africa and Egypt.

Development of the SDDC system for the Tembikai project is one of two industry firsts that eliminated welded connections and the need for divers. In its initial use, the AFGlobal system joined the pipeline to the host facility by connecting the rigid pipe to flexible risers using an ROV and deployment frame. The pipelay also marked the first subsea use of NOV-Tuboscope’s Zap-Lok mechanical connector, a non-welded pipe joining technology, offshore Malaysia.

Development of AFGlobal’s SDDC technology was driven by the need for a shallow-water connection between the pipeline and riser that did not require welding or the need for divers as well as the desire to reduce project costs and time. Presented with an imminent project application, the SDDC went from an initial concept to deployment in one year. The fastpaced AFGlobal development process began in April 2019 and included design, fabrication, testing and deployment of two SDDC systems.

The SDDC system is based on AFGlobal’s Retlock clamp technology, which has more than 25 years service history with over 1,750 connections made in shallow-water and deepwater applications. Tailoring the technology to the Timbikai tieback involved extensive design and modeling of a landing system made up of guidance equipment and ROV tooling.

The resulting package eliminated riser end terminations and jumper spools, which allowed direct, diverless, weld-free connection of the flexible riser to the pipeline. In reducing time and expense, the system enabled cost-effective use of an ROV in the shallow-water application. Eliminating the need for divers improved project safety, reduced manpower and support requirements, and cut installation time. In addition, the operations required fewer and smaller surface vessels, further reducing the project’s cost as well as its carbon footprint.

The SDDC technology is the latest advance in diverless connection innovations leading up to the Tembikai project. The Retlock ROV-operated twin-bolt clamp connector at the core of the SDDC system has a decades-long history. It is qualified for applications up to 15,000 psi in water depths up to 10,000 ft and is available in diameters up to 22 inches. Bespoke configurations enable contingency recovery of moving components, and mono- and multibore connection capabilities. The technology is also installable with a pipeline receiver and launcher for commissioning directly after installation.

Developed with inherent design flexibility, the Retlock connection allows a single system to be used across the entire field and installed with the same tooling and work class ROVs for a more cost-effective solution. The diverless clamp is engineered for both conventional and  HP/HT developments in shallow- water or deepwater mono- and  multibore installations.

In 1994 AFGlobal released the Diverless Maintained Cluster (DMaC) in BP’s North Sea Foinhaven Field, and later in the Schiehallion Field. The drag-to-place connection system features flexible, interruptible installation with jumper, tree and manifold that are separately deployed. Designed to operate in extreme environmental conditions, the DMaC enables wet parking of jumpers for later installation. The technology maximizes installation flexibility and over the life of the field with a low field opex.

Released in 2013, the Flowline Type Connector (FTC) on Chevron’s Mafumeira Field offshore Angola provided a new capability with a reliable, cost-effective and adaptable means of installing and connecting both rigid and flexible horizontal flowline jumpers. The horizontal connection system has guideless installation and provides stab and hinge-over landing ability using a common and retrievable pull-in tool.

Offshore Angola also saw the initial use in 2014 of AFGlobal’s Riser Top Connector (RTC). Deployed for Total’s Kaombo ultradeepwater development, the RTC was developed to facilitate connection of a single hybrid riser. Used for both riser base and riser top tie-in, the technology makes it possible to make connections in less than 2 hours once landed on the host structure.

The SDDC introduced for the Tembikai project is the latest system in a steady advance of diverless technology. Integration of guidance and ROV tools with Relock clamp technology marks a significant new industry capability.

The SDDC system removes the need for critical-path diver operations to achieve significant savings compared to conventional diver-installed methods. Eliminating the need for divers has many repercussions, including improvements in safety as well as lower manpower and time requirements. It also reduces the size and number of support vessels required by the operation and contributes to a reduced carbon footprint.