In the early days of drilling, long before the Shale Gale blew in and upset the status quo, there was the phrase “rope, dope and soap” in reference to the trio of core materials needed to get wells drilled. These  consumable items made it possible to hoist a bucket into the derrick or grease the engine gears for a smoother run and a means to get clean.

Over time, the phrase came to encompass anything and everything that wore out quickly. And then came the Shale Gale with its less melodious “plug, perf and prop,” and like the global oil markets it upset, the Gale tipped the balance of operations for oilfield service (OFS) companies.

Deloitte puts forward this observation in the article “Oilfield Services: Caught in the Cycle,” which appeared in the company’s “Decoding the O&G Downturn” report. The OFS segment article assesses the health of the segment, identifies possible reasons for its underperformance and examines its changed margin profile. 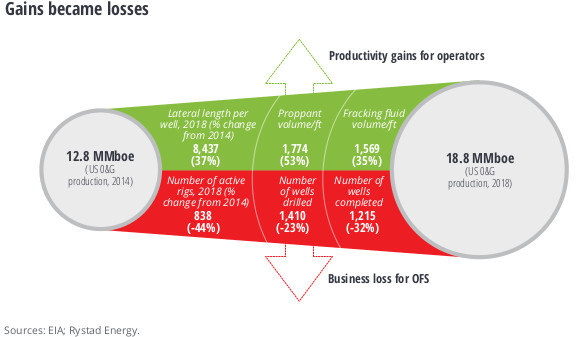 Considered the backbone of the upstream oil and gas (O&G) industry, OFS companies develop and put forward the technological advances needed to make shale resources commercially possible. However, recovering from the price downturn has been challenging. Since 2015 more than 170 OFS companies have filed for bankruptcy, according to Deloitte. The shale “boom turned into doom” for OFS in that the increased drilling, completion and production of resources that grew by 11% during the downturn did not reciprocate with similar growth in business for OFS companies, the study found.

“In fact, the segment’s revenue fell by 20% during the downturn, due to both reduced activity and downward pricing structure,” according to the report.

Posed with the task of reducing costs and improving productivity, producers turned to OFS to provide the needed solutions. This, in turn, created the opportunity for service companies to develop enhanced well completion designs that were larger and more complex.

“The average length of laterals and volume of proppants and fluid increased by 35% to 50% during the downturn, supporting a 50% rise in U.S. O&G production and a 50% to 60% fall in wellhead breakeven,” according to the report.

Multiwell pad drilling and increased well productivity reduced the need for and the day rates of rigs. The average number of rigs, the study found, dropped by 45% in the U.S., while the number of drilled and completed wells dropped by 25% to 30%, according to Deloitte.

While the OFS segment faces significant and unique challenges, Deloitte suggests the way forward includes operational agility and nimble scalability along with the use of performance-based contracts and the formation of alliances to ensure service companies can thrive amid market uncertainty.