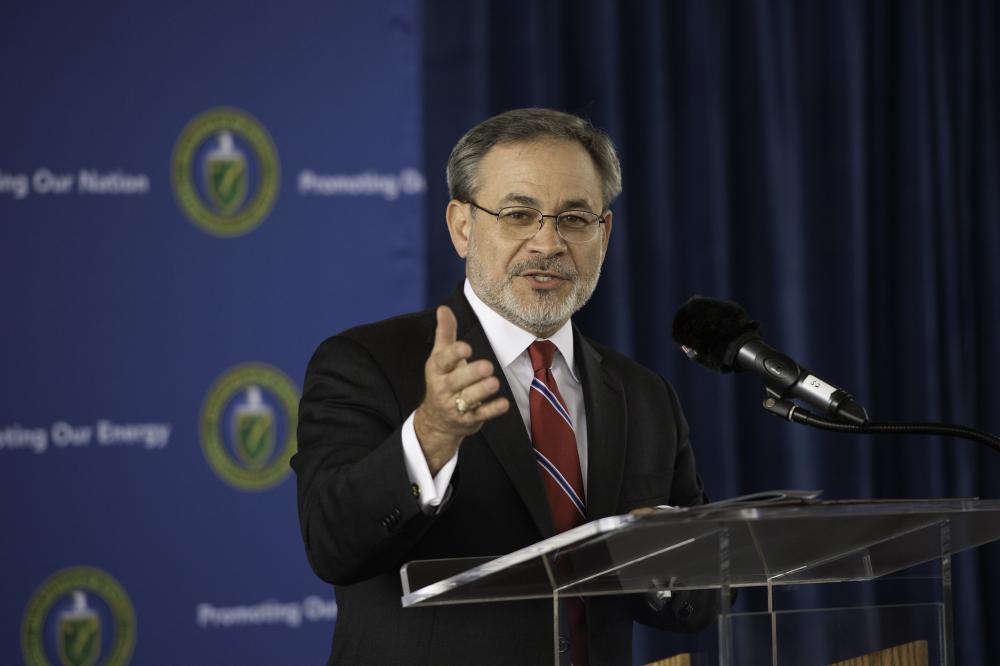 HOUSTON—It wasn’t long ago that the United States dealt with a perceived energy scarcity.

But Deputy Secretary of U.S. Department of Energy Dan Brouillette said the country is far removed from those concerns now. The U.S. is now a world leader in the production of oil and natural gas and currently exports LNG to more than 34 nations on five continents.

So how did this happen?

“We did it by striking the right balance between technology, politics and economics,” Brouillette said while delivering the keynote address to kickoff the Baker McKenzie’s 6th Annual Global Oil & Gas Institute on April 25. “Through innovation and technologies, the right policies, the reliance on a free and open market we are transforming the oil and gas sector and opening what Secretary Perry calls a new American energy era.”

OPINION: Behind Trump's Executive Orders; It's the Demand Dummy...Isn't It?

There is no argument that the U.S. now works from a position of strength in oil and gas production. While the shift in positioning in the sector began under former President Barack Obama, Brouillette credits the current administration of President Donald Trump for “truly unleashing American energy” in recent years.

Between now and 2020, Brouillette said this country is expected to contribute half of the world’s growth in oil and gas production. According to the Energy Information Administration, in 2019 the U.S. expects to produce an average of 12.4 million barrels per day (MMbbl/d) of crude oil and that number is expected to increase to 13.2 MMbbl/d in 2020 all while remaining conscious of the movement for cleaner energy.

“This year we also expect natural gas to average 90.2 billion cubic feet per day and that will rise to 92.1 next year,” Brouillette said. “And we have accomplished all of this while leading the world in reducing energy-related carbon emissions, cutting them by 14% in 2005 to 2017 and expect those emissions to continue to decline over the next few years.

“Those are truly astonishing numbers, especially considering that it wasn’t too long ago that America was experiencing an energy shortage. In my lifetime at least, I remember long lines of cars waiting for short supplies of gasoline, not to mention concerns about peak oil.”

Brouilette said one of the key components in the U.S. remaining in a position of strength in the oil and natural gas sector is that policies in this country must be designed for continued growth. Investing in infrastructure, he said, is at the top of the list.

As a cautionary tale, Brouilette points to policies in New England and the northeast region that it made it more practical to buy Russian LNG rather than Marcellus Shale—one of the world’s largest natural gas fields—that sits just a few hundred miles away. Anti-energy activist reportedly pressured locally elected officials in that region to block new energy infrastructure, like pipelines, that would have made it easier to bring American gas to the region. Also, the State of New York has not allowed any pipeline projects through its borders to transport natural gas from the Marcellus to the New England.

As a result, residents in New England have paid some of the highest energy bills in the country, according to a story that appeared in the Washington Examiner in March 2018.

“The United States is on track to be a net exporter of LNG in the coming years and some of our citizens have to rely on foreign adversaries to supply or satisfy their energy needs.” Brouillette said. “Policies like these lead to an astonishing and a willful loss of economic opportunity.

“In contrast our administration is doing everything it can to foster innovation, to encourage responsible energy development and to build the infrastructure that we need in the future days.”

“The President has also approved new pipelines and removed what we refer to as Draconian restrictions on responsible oil and gas production here in the United States,” Brouillette said. “The President is embracing regulatory reform so that the regulations can once again become the rules of the road rather than the barriers across it.”

Brouillette credits the DOE for streamlining some the barriers, saying that for each new regulation within the government, the administration has removed 22 existing regulations. As an example, he said last September DOE issued a rule that will expedite the permitting of small-scale exports for U.S. natural gas to places like the Caribbean and Central America where infrastructure and economic constraints limit large -cale LNG imports. The department also made changes to the reporting requirements to LNG export sales and contracts with the hopes that will increase efficiencies and stream line LNG exports.

We are committed to working with our partners across the government to even further streamline the energy infrastructure permitting and the authorization process,” Brouillette said. “On that note we applaud and we support FERC’s new approach to expediting and improving the review of LNG terminal applications. It’s a significant step toward bringing more U.S. LNG into the market and building on the successes of American natural gas.”

In order to achieve this, Brouillette said, the U.S. must let the markets work and trust that the invisible hand will work its wonders. He insists the U.S. is prepared to compete openly and fairly on world markets.

“We will trade with any willing partner,” Brouillette said. “Rather than seeing our oil and gas exports zero sum gain, we believe this will contribute to more fluid, transparent and competitive markets as well as leading the rising demand in Asia and other markets. And as we do we will keep our word and honor our contracts and we expect others to do the same.”

“While I have focused on oil and natural gas, this administration is committed to an all of the above energy strategy,” he said. “This approach of fostering innovation and technology, of getting the politics and the policies right and letting the markets work apply just as strongly to solar, to wind, to nuclear, to hydro and to CC U.S. technologies.

“Together we are at the opening of a new era of American energy where we are promoting technology and innovation, prosperity, security and opportunity not only for all Americans but for all of the world.”

Foothills Resources retained EnergyNet for the sale of an operated package of Texas Gulf Coast assets through a sealed-bid offering closing Sept. 5.