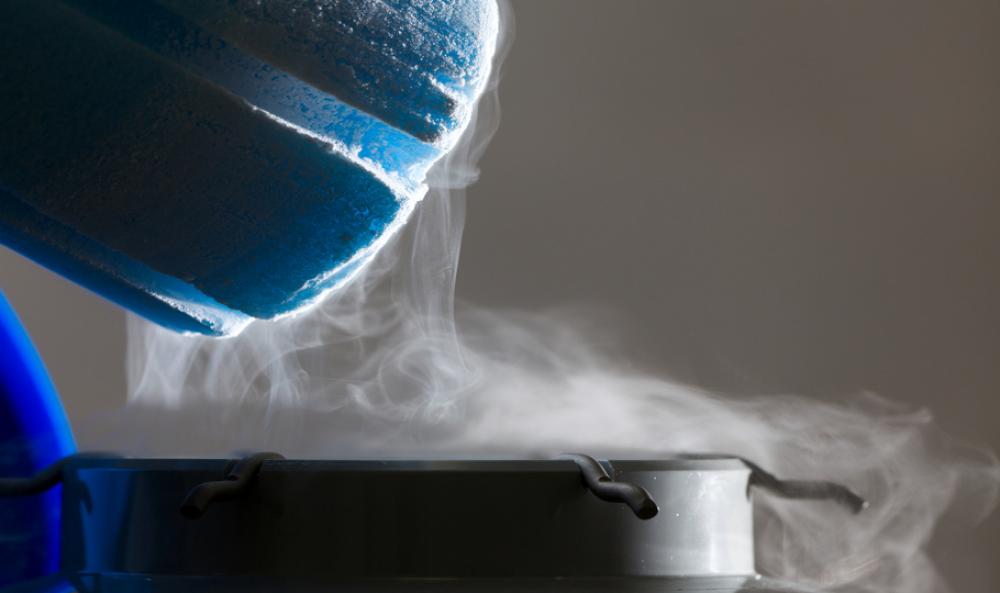 Horizontal drilling and hydraulic fracturing have boosted oil and gas production to new heights in the U.S., but cryogenic fracturing could lift sagging recovery rates, prolong the life of fields and reduce use of what is becoming a more precious commodity.

By replacing water with cryogenic fluids, such as liquid nitrogen or liquid CO2, researchers hope to provide operators of gas fields with a new well stimulation technique with multiple benefits. Researchers at the Colorado School of Mines, working with CARBO Ceramics, Pioneer Natural Resources and the Lawrence Berkeley National Laboratory, are testing various approaches as part of a $2.7 million project with the Research Partnership to Secure Energy for America (RPSEA).

With a goal of significantly increasing permeability in a large reservoir volume surrounding vertical and horizontal wells, RPSEA said the benefit of the project will be twofold if successful.

“First, it would reduce or eliminate the water usage during hydraulic fracturing, which has clear environmental benefits including reduced groundwater pumping and eliminating flowback disposal that sometimes leads to induced seismicity,” said Kent Perry, vice president of onshore programs for RPSEA. “Second, from production’s point of view, it should reduce or eliminate formation damage caused by capillary trapping of fracturing fluid and/or interaction between fracturing fluid and clay.”

Now is a good time for such an effort because there is much need to improve the productivity of shale gas wells, while also reducing the resources consumed and lessening the environmental impact posed by fracturing operations, he added.

As part of the three-year project led by Yu-Shu Wu, professor and foundation CMG reservoir modeling chair at the Colorado School of Mines’ Petroleum Engineering Department, two sets of lab experiments are being conducted. The first investigates the cryogenic fracturing process at room temperature, using isotropic media; the second uses natural rock and core samples under reservoir temperature, stress and pressure conditions. Both sets will test the potential of liquid nitrogen and CO2. A triaxial loading frame is being used to simulate downhole stress conditions.

As of mid-July, researchers have conducted fracture initiation tests in transparent acrylic and glass samples, concrete blocks and sandstone blocks. They also have designed and built cryogenic fluid delivery systems, a loading frame and acoustic sensors for monitoring and detection, in addition to the capability of injecting pressurized liquid nitrogen and nitrogen gas, according to an emailed response jointly from Perry and Wu.

“We are about to start cryogenic fracturing fluid injection test in the next few weeks,” the researchers said. “So far we only tested liquid nitrogen. This fluid is easily obtainable, boils rapidly, cools rock quickly and is nontoxic.”

The most significant finding so far, according to researchers, is that “cold temperature can initiate complex fracture patterns on the surface of a sample.”

But the team also has encountered some challenges. These have involved the availability of pressure equipment and seals rated for liquid nitrogen temperature and use of stainless steel and proper designs to direct the cold temperature to where it is needed, such as the rock’s surface rather than to seals where it could be harmful.

“In the field, there will be challenges in delivering liquid nitrogen to the depth needed, but there is industry experience in that field,” the researchers said. Transporting proppants could pose additional challenges. “The proppant-carrying ability of liquid nitrogen is not as strong as other fluids, and it will vary because of changes in gas state and velocity. We think some kind of proppant will be needed to keep the fractures open, and this will be explored by the experiments.”

In a previously conducted and unrelated study, the higher viscosity of gelled liquid CO2 used to stimulate fractures in tight gas sand formations enabled proppant to be carried easier than cryogenic CO2 and nitrogen, which lack high viscosity. A lightweight proppant would be favorable for use when the viscosity of the cryogenic fluid of choice is low, or a self-propping mechanism may suffice.

If the technology yields favorable laboratory tests, then a field trial will be conducted and could provide more insight—such as depth of fractures—into what operators may find in the field.

However, “note that microseismic does not really tell us whether the fractures have actually reached there. They only tell us something happened there because of injection. But, it is perhaps the only method that we currently have in the field to gauge the size of the so-called ‘stimulated volume,’” the researchers said. “Also, cryogenic fractures can occur at locations that may not be activated solely by pressure and in different directions as well because of the different process. These new fractures can then be stimulated by other means [pressurized liquid nitrogen, gas] that will reach deep into the formation.”

Field tests would be conducted at a well owned by Pioneer, possibly in the Pierre Shale.

Just as no shale well is the same, the rate of production varies from field to field, from well to well and from the initial stage of production to the late life of the well, the researchers said.

But if cryogenic fracturing is successful, environmental benefits and reduced water usage could follow with minimal environmental impact.

“If cryogenic fracturing grows into a large-scale service, then there should be impacts associated with building new gas separation plants to meet the supply,” according to the researchers. “But other than that, we think the impact should be minimal compared to conventional hydraulic fracturing. In addition, cryogenic fracturing has the benefit that there will not be flowback fluid that needs to be disposed of.”

Other hurdles also would need to be overcome to make the technique a viable option for industry: economics and more field trials. Previous field trials have been conducted using liquid nitrogen, but it is not commonly used in the field. However, fracturing with nitrogen gas foam is being used by some companies in combination with some water use at water-sensitive, low-pressure formations, the researchers said.

“As it is not being carried in the field today, it is difficult to put a price tag on how much such service would cost. When compared to hydraulic fracturing, one must realize that conventional hydraulic fracturing is a matured system, whereas liquid nitrogen technology would probably bear the cost of initial investments in R&D and special equipment,” they continued. “SPE 38623 (1997) reported the costs of five field trials, and they ranged from $37k to $86k. The average was $54k. The refracturing operation in the same area cost about $47k in average.”

Moreover, use of cryogenic fracturing would require modifying pumping systems, delivery lines and the blender for proppants to withstand cold temperatures.

It is still too early to say which types of formations cryogenic fracturing would best suit, “but intuitively those with low thermal conductivity and high thermal expansion coefficient would be more amenable to cold temperature induced failures. Also, brittleness will help just like the case for regular hydraulic fracturing.”

For more information about the project, visit RPSEA’s website at rpsea.org/projects/10122-20/.

Exxon Mobil had set a May 1 deadline to lock out and replace union-represented workers from its Beaumont, Texas, complex with managers and temporary staff if there were no vote on a company proposal.

Pioneer Natural Resources, which operates in the Permian Basin in West Texas, said that its total output was 474,000 boe/d in the first quarter, compared with 364,000 boe/d of production in fourth-quarter 2020.