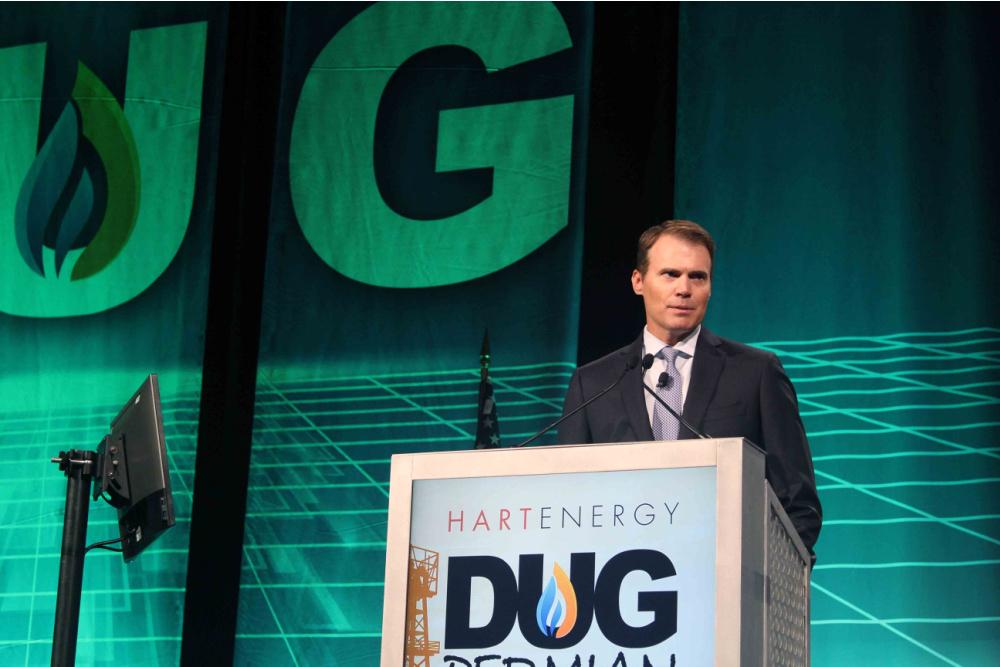 FORT WORTH, Texas—U.S. independent producer ConocoPhillips is taking its learnings from refracs in the Eagle Ford Shale to the Permian Basin, according to the executive leading its Permian business.

Jack Harper, president of ConocoPhillips’ Permian Business Unit, showed attendees of Hart Energy’s DUG Permian Basin and Eagle Ford conference this month how the initial rate of production from a group of 50 wells in the Eagle Ford soared after mechanical isolation refracs.

“In the Eagle Ford, there’s been over 300 additional wells identified and having drilled multiple thousand wells in the Permian—many of which have older vintage completions—I feel very confident that this application is going to have some scale in the Permian,” said Harper. “This is going to be one of those learnings that we put into practice this year. We will take what we’ve learned and immediately pursue it in both the Midland and Delaware basins, and we will have one of those completed in each basin before the end of the year.”

By studying and tweaking completion recipes and techniques over time, U.S. shale players have been able to improve well productivity. Refracs have also proven beneficial in minimizing the interaction between parent and child wells, particularly in the Eagle Ford for ConocoPhillips.

It is one of the ways the Houston-headquartered company plans to further gain efficiency, leveraging technology and innovation, as it moves forward with a 10-year plan following the January completion of its acquisition of Concho Resources Inc. The company had already grown its average oil IP rate in the Permian, Eagle Ford and Bakken from about 300 bbl/d in 2013 to an average of more than 800 bbl/d in 2020. With massive amounts of acreage across several major U.S. shale basins, including about 700,000 unconventional net acres in the Permian, ConocoPhillips has plenty of running room.

“What sticks out to me is the number of large contiguous blocks we have,” said Harper, who previously served as president of Concho. “In my mind, that’s what is necessary to really drive the lowest cost, most efficient development in the Permian. And we’re fortunate to have that. We also have a lot of acres that we plan to actively manage in this portfolio through swaps and trades.”

He added that good well results are expected when there is good acreage and execution.

The company will continue to push the envelope on lateral lengths, having already drilled some 3-plus mile laterals in the basin. Plans are for the company to drill 7,000 wells over the next 10 years, including about 5,000 in the Permian.

“After the cost to drill wells and the cash cost associated, we think we can yield about $23 billion worth of free cash at $50 real oil price,” Harper said. “That’s about two-thirds of the free cash in the Lower 48 and about a third of the company total. So, the Permian is a very meaningful asset within the ConocoPhillips portfolio.”

The company is counting on efficiency gains and technology to drive improvement. The combined Lower 48 data of ConocoPhillips and Concho in 2019 compared to today show “early wins” post-transaction. These include a:

The company also sees cost savings of about $200,000 per well and a 40% frac cycle time reduction with “zippering zippers” plus about a $100,000 per well cost savings with dual fuel and 20% noise and emissions reductions with e-frac fleets. Nearly all of ConocoPhillips’ completions will use either dual fuel or e-frac technologies, he said—“making the business better and more efficient and environmentally friendly.”

ConocoPhillips is also seeing savings and shorter drilling times with use of slimhole drilling. It’s something the Concho team was able to apply immediately to the Conoco assets, saving in some instances more than $500,000 in drilling costs alone.

When it comes to completing wells, Harper recalled first drilling horizontal wells at Concho about 10 years ago.

“Our objective and the style of completion was totally different. We were wanting to reach out as far as we could with these gel jobs and so forth. Now, it’s near wellbore, draining as much as we can,” Harper said during a question-and-answer session following his presentation. “Completions have evolved substantially. The spacing, in general, got tighter from the beginning.”

Older vintage wells with old completions that were up-spaced will be “great candidates” for refracs, he added.

“We continue to find ways to get better, to get more efficient. … All the while, we’ve brought down our breakevens,” which dropped to about $35.20/bbl (WTI) last year from about $71.80 in 2014 in the Permian, Harper said during his presentation.

“When you put those two things together, it creates a business that is not only more resilient to withstand the cycles that are going to happen in commodities through time,” he added, “but also to really enter this new phase of energy, which is a more returns-based model, that will allow our energy industry to compete more broadly across the industrials and other sectors in the investment universe.”