Americans love Mexican beer. Much of that beer consumed by los norteamericanos at tailgates, parties, wedding receptions, happy hours and elsewhere bubbles to life at one of the world’s largest breweries—the sprawling Compañía Cervecera de Coahuila plant—on the outskirts of Piedras Negras, Mexico.

Piedras Negras and Eagle Pass, Texas, are twin cities that lie either side of the Rio Grande. It takes lots of natural gas to run a modern brewery and the plant, owned by Constellation Brands, has an advantage over competitors. It’s located at the western end of Texas’ big Eagle Ford Shale play.

Mexico would like a lot more U.S.-produced gas, but demand for gas across the border hasn’t grown as fast as many in the midstream expected; the nation has other demands.

A growing volume of the gas flowing from the Eagle Ford, the Permian Basin and other plays flows south under the river to auto assembly plants, bakeries, power plants and breweries as Mexico strives to industrialize.

Any significant uptick in U.S. gas sales to Mexico “will be tied in large part to how quickly new gas pipeline capacity can be completed within Mexico, but a number of pipeline projects south of the border have experienced delays,” RBN added.

But the uptick is happening more slowly than the industry had hoped.

“If you go back four or five years ago, people thought that we would be close to 6 billion cubic feet per day (Bcf/d) of net exports to Mexico today,” Leigh R. Goehring, managing partner at Goehring & Rozencwajg Associates LLC, told Midstream Business. “But I think where we are today is about 4 Bcf/d to 5 Bcf/d, according to EIA [U.S. Energy Information Administration] data. I don’t know what the real reason is for the lack of robust growth. Is it because of what’s happening in the Mexican economy, they're using less gas? Or is it just that their pipeline infrastructure is not actually developing?”

An additional 4 Bcf/d is nothing to ignore, but it’s not why midstream started putting pipe in the ground to serve the Mexican market.

Indeed, sales across the border improved as 2018 went along, RBN Energy noted in a third-quarter 2018 report. It said sales passed 5 Bcf/d in the second half of the year “and have hung on to that level since. This new export volume signifies incremental demand for the U.S. gas market at a time when the domestic storage inventory is already approaching the five-year low,” the report said. “At the same time, it would also signify some much-needed relief for Permian producers hoping to avert disastrous takeaway constraints—that is, if the export growth is happening where it’s needed the most, from West Texas. However, that’s not exactly the case.”

The booming Permian Basin has the most to gain from Mexico, the closest substantial market to West Texas and southeastern New Mexico. New wells in the play’s Delaware Basin are gassy, and that associated gas has to go somewhere even if producers drill for the more lucrative oil. Right now, there’s a scramble to move Permian gas south, east—anywhere.

“Actual flows, however, are constrained to just roughly 0.3 Bcf/d at present, the limit of Mexico’s current import infrastructure. Nonetheless, this level is a material improvement from the sub-0.2 Bcf/d for most of first-half 2018,” it added.

“Beyond exports to Mexico, we believe the gas production trajectory will require two of the six proposed greenfield takeaway projects at a minimum” to bring the Permian into line, Baird added in its report.

Something short-term
“Those three main pipelines that are coming out of the Permian to Mexico have been ready to go and capacity has been there for a while, but the Mexican side is not actually taking it,” Trisha Curtis, president and co-founder of Denver-based consulting firm PetroNerds LLC, told Midstream Business. “The Permian needs some short-term alleviation that people are expecting for the gas side.”

That could come via the Gulf Coast Express (GCX) project scheduled to enter service in late 2019.

The line is a joint venture of Kinder Morgan Inc., DCP Midstream LP and Targa Resources Corp. Announced it late 2017, it would move 220,000 dekatherms per day (Dth/d) of gas from Waha to the South Texas Agua Dulce hub—and from there to either Mexico or the Texas Gulf Coast petrochemical market. Construction started in May.

Along with 160,000 Dth/d of available capacity, 60,000 Dth/d were added due to strong market demand. With the added capacity, the total GCX Project will have a total design capacity of 1.98 billion cubic feet per day (Bcf/d) at an estimated cost of $1.75 billion.

GCX might not be enough. In August, Targa announced plans for the Whistler Pipeline, a 2 Bcf/d gas line, also from Waha to Agua Dulce. Partners are NextEra Energy Pipeline Holdings LLC, WhiteWater Midstream LLC, and Marathon Petroleum’s MPLX LP. The parties are committing roughly1.5 Bcf/d to the project, which is expected in-service by fourth-quarter 2020 pending regulatory approvals. NextEra Energy Pipeline Holdings will construct the project, while Targa will be the operator.

Big tickets
Both lines are big-ticket projects, stretching more than 400 miles and costing about $2 billion each. And there’s still the potential problem for capacity or demand limits across the border. But Agua Dulce is “definitely better” than Waha right now, according to Goehring.

“The Eagle Ford has that ability to go east where all those big LNG plants, next year, are going, creating 5 Bcf/d to 5.5 Bcf/d of new gas demand,” he added. “That’s going to pull that Eagle Ford gas due east. They don’t have the tremendous problem that they do in West Texas, where producers are temporarily trapped.

“Their big problem [in the Permian] is whether they can physically get the gas out. They don’t care whether they basically receive almost zero for it,” he added. “So as long as there’s enough capacity to get it out, I think they’re OK with the prices because the gas is a byproduct.”

Whether the problem south of the border is demand or capacity is hard to determine, Curtis added.

“The problem is most definitely on the other side of the border,” she said. “I think the problem is they don’t have the infrastructure on the other side. But you don’t get a whole lot of clarity because they don't have a lot of transparency. Even when you're talking to experts on the Mexican side, they still don't know the details of all the pipelines—and that’s a big one.”

Part of Mexico’s infrastructure problem stems from permitting, which is a headache familiar to U.S. midstream operators.

“It’s interesting how some of these countries further south, like Colombia, have a very strong green movement that definitely enforces all sorts of regulations,” Goehring said. Mexico’s significant energy reforms, begun in 2013, have added confusion over which parts of the energy sector do certain tasks. According to a May Reuters article, upstream firms that won drilling blocks encountered red tape that has slowed drilling and development. The same holds true in the midstream, many industry analysts maintain.

And the problem may get worse as leftist politician Andrés Manuel López Obrador is sworn in as Mexico’s new president. López bitterly criticized the energy reforms but struck a more moderate tone during the transition period leading up to his inauguration on Dec. 1.

Canadian confusion
The gas market north of the border also suffers from confusion, although gas has moved freely in both directions for decades. “Canada pursues similar energy policies to the U.S., which currently buys 90% to 99% of Canadian oil and gas. This means technology development in Canada must address business, technical and regulatory requirements and economics in both markets,” DNV noted in its “Energy Transition Outlook 2018” study, published in late September.

Canadian gas prices “have just been terribly depressed,” Goehring said. “But what’s so interesting about that is that even with depressed gas prices, the Canadian gas players are making money.”

A long-sought Pacific LNG export operation—LNG Canada—may come to fruition as Shell and its partners announced plans to move ahead with a project based at Kitimat, British Columbia, 400 miles north of Vancouver. It could sell significant volumes of gas to Asia. The seaport in northern British Columbia would enjoy the shortest trans-Pacific route to China, South Korea and Japan—half the distance from the U.S. Gulf Coast and without pricey Panama Canal tolls. But the seaport is remote and would require building hundreds of miles of pipeline from Dawson Creek, British Columbia, across the heavily forested Rockies.

The project has customer support. Tokyo Gas announced in October a 13-year agreement to take 14 million tonnes per annum from the project.

IP would draw about 1.8 Bcf/d of gas, but the plant would not go onstream until 2022 at the earliest. RBN noted in a late-October report that the project “won’t come online until 2023—an eternity for producers in the region’s Montney and Duvernay shale plays, who through much of 2018 have endured profit-crushing price discounts for their gas relative to Henry Hub.”

If—and when—Kitimat goes onstream, it will help redraw North America’s gas flow map, RBN added. “The challenges that [western Canadian] producers have faced in the intervening years as production growth in the Marcellus/Utica, the Permian and other U.S. plays squeezed them out of their traditional markets (the Northeast, the Midwest, Eastern Canada, etc.)” are major, it said.

Indeed, “The Montney is an impressive play and has tremendous potential,” Goehring noted.

The proposal has drawn bitter opposition from British Columbia’s government and environmental groups. But if the project comes off—and that remains if—it will not impact North American gas demand for years, Goehring said. Two proposed LNG facilities in Quebec are also in consideration, “but again, we’re talking years and years to go,” he added, “a minimum of 2025 or something like that.” If built, they would create a new market for Marcellus and Utica gas.

And it may not happen even with the current support, Curtis cautioned. “If they’re getting that built, that would be really positive for potentially moving gas up through the Northwest. Any North American LNG exports I think are positive. I don't think that hurts the U.S. in any capacity because they probably would just open up avenues for more U.S. gas to get into Canada.”

“I would hope that we would be able to expand natural gas exports to Canada, probably through existing systems we have that cross the border from the Northeast,” Curtis said. “But if we really think of where we put this natural gas, and if we have a slow build for LNG exports—and particularly if we have issues with sending those exports to China—we really need to be pushing into Canada.

“I think the problem is when you look at the slated capacity for LNG, and you look at the exports, it's a slow ramp-up and it's not going to be the savior everybody's thinking,” she added. “I would assume that’s as it should be, But it doesn't mean that’s actually going to happen, but it should be something thought about pretty seriously. I do think there are serious ramifications for things going on with China, which could in fact be the export market for both crude products and LNG.” 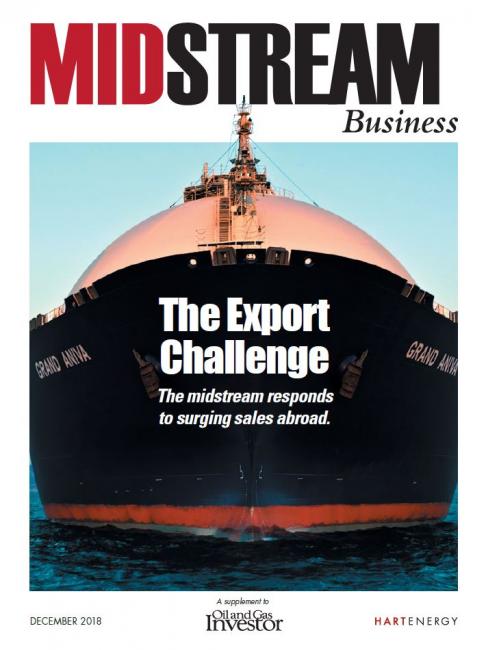