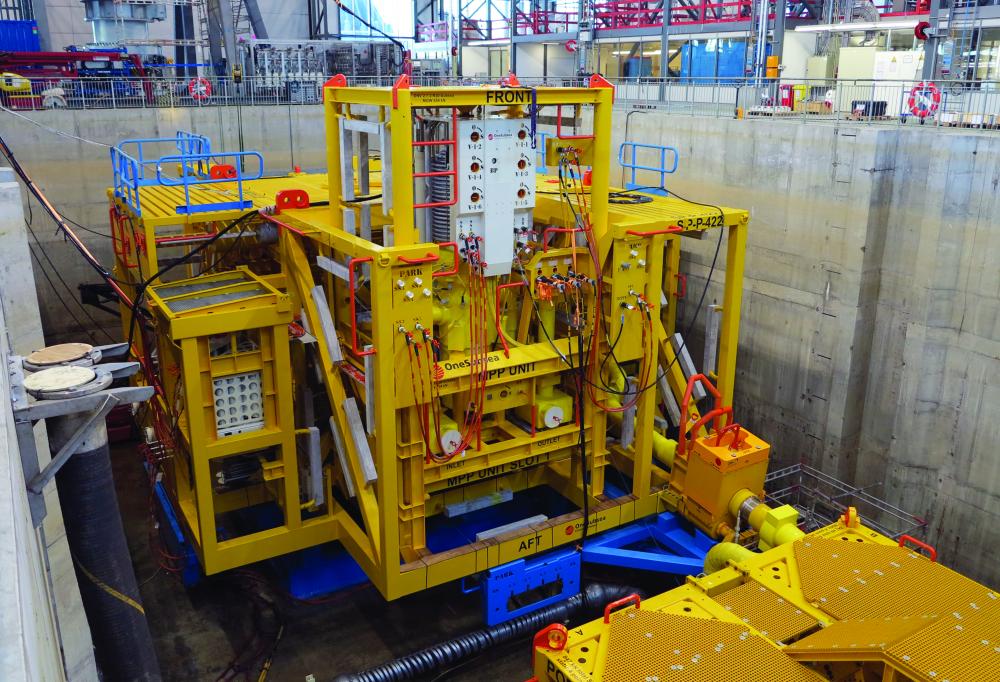 FIGURE 1. A high-viscosity, high-boost pump in a subsea pump station was tested at the OneSubsea test facility in Horsøy, Norway. (Source: Schlumberger)

Subsea boosting has reached a significant milestone regarding high-viscosity capabilities. In March 2017, Total E&P installed and put into operation a newly qualified high-viscosity, high-boost pump in the Moho Field offshore the Republic of the Congo. The pump had been through an extensive qualification program comprising flowloop testing on multiphase conditions ranging from 0% to 75% gas volume fraction (GVF) and viscosities from 1 centipoise (cp) to 800 cp. The pump also demonstrated the capability to perform cold startups up to 30,000 cp—a viscosity equivalent to maple syrup. The qualification of this technology has opened an opportunity to offer high-boost pumps in applications that were regarded as impossible for dynamic multiphase pumps in the past.

The first subsea boosting pumps were 400 kW and installed at modest water depths. Since then, the boosting capabilities have increased regarding power, design pressure, differential pressure and throughput. Their unique design is highly sand tolerant and handles a wide range of GVF. OneSubsea has delivered more than 100 subsea pumps worldwide and accumulated more than 3 million hours of successful operation.

Some of the world’s largest reserves are heavy oil reservoirs, defined as liquid petroleum of more than 200 cp at reservoir conditions. Production of heavy oil in combination with increasing water cut brings a potential for very high emulsion viscosities. Combining this with multiphase flow and the trend of increasing tieback lengths, a traditional artificial lift method like gas lifting can be rendered inefficient. However, seabed boosting can represent an attractive production-enabling technology for such fields. It draws down wellhead pressure, and at the same time, it reduces flowline pressure drop by adding heat to the process fluid.

In production since 2008, the Alima floating production unit (FPU) situated offshore the Republic of the Congo produces from the Moho and Bilondo tiebacks. Water depth in the area is approximately 800 m (2,625 ft), and the development concept is based upon a subsea production system connected with a riser system to the FPU.

OneSubsea was awarded an engineering, procurement and construction contract for Total’s Moho 1bis development. The contract included a subsea pump station with two 3.5-MW high-boost multiphase pumps to meet the forecasted production profile (See Figure 1 above). Also, OneSubsea committed to a qualification program verifying the boosting capabilities at viscosities that had never been tested with subsea multiphase pumps before.

The maximum differential pressure requirement was set to 110 bar. The pumping system was designed to operate one pump at a time according to wet spare philosophy as well as parallel operation of the pumps. The substantial head, capacity and viscosity requirements resulted in the highest power rating ever supplied for a subsea multiphase boosting system.

In addition to the standard factory acceptance test and endurance test, OneSubsea committed to demonstrating the high-boost pump’s ability to operate continuously on 800 cp at various GVF while monitoring rotor dynamic and hydraulic performance. An additional performance mapping on viscosities ranging from 50 cp to 800 cp also was executed.

A high-viscosity multiphase test loop was designed and built for full-scale testing of the pump. This setup comprises a 40-sq-m (430-sq-ft), two-phase separator, chokes, process coolers and advanced measurements to secure viscosity control and conditioning of the multiphase fluids for precise performance characterization. The test loop enabled operation through the full capacity range of the pump: a liquid flow rate of up to 600 cu. m/hr (21,189 cf/hr), or 90,000 bbl/d, and 0% to 75% GVF.

Throughout the test campaign, the engineers in the pump control room learned many valuable lessons. The combination of high-viscosity and multiphase conditions proved to have a surprising and severe impact on the rotor dynamics of the pump. A large number of research-related operating hours laid the foundation to update design principles, performance models and protection logic. Following this, the upgraded pump was run through the full test matrix of varying viscosities and GVF. Its performance was dynamically stable under all conditions. In this case, the investment in a comprehensive test program was instrumental for the reduction of project risk. The gained competence and test facilities developed during this project will undoubtedly be leveraged to provide guidance and ability to execute future high-viscosity pump projects (Figure 2).

The performance of the pump was validated through full-scale testing at liquid viscosities from 1 cp to 800 cp, GVFs from 0% to 75%, and the full range of power, speed and differential pressure. As part of the performance mapping, the pump also proved its ability to start at extreme viscosities of 30,000 cp. The tested viscous performance was greater than predicted, disproving the misconception that viscous pumping requires displacement pumps.

Nine months before the startup, OneSubsea was informed that analysis performed on the actual process fluid from the Moho reservoir showed an even higher viscosity than initially predicted. The assessment of the new production profile also showed that the multiphase pump system was going to operate with a significant recirculation rate. The high recirculation rate gives an increased pump inlet temperature, which again results in a lower viscosity compared to the fluid from the wells.

The world’s first high-viscosity, high-boost pump system was successfully installed, commissioned and started at the Total Moho Field in March 2017. The subsea boosting system has proved its operational flexibility by handling the late updated production profile. The reduced viscosity in the downstream flowline has proven to be a secondary positive effect of boosting when operating on high viscosity. Because of the high recirculation rate, the multiphase pump is equally used as a booster and a heater, reducing the flowline viscosity. The high-boost pump has been running with 100% availability following the startup.

During the test program, the high-boost pump proved its ability to perform cold startups up to 30,000 cp, exceeding the requirements for the Moho project and most relevant future subsea fields.

Editor’s note: This article was adapted from the OTC- 28953-MS paper, “Qualification of the HighBoost Multiphase Pump for Heavy Oil Applications.”