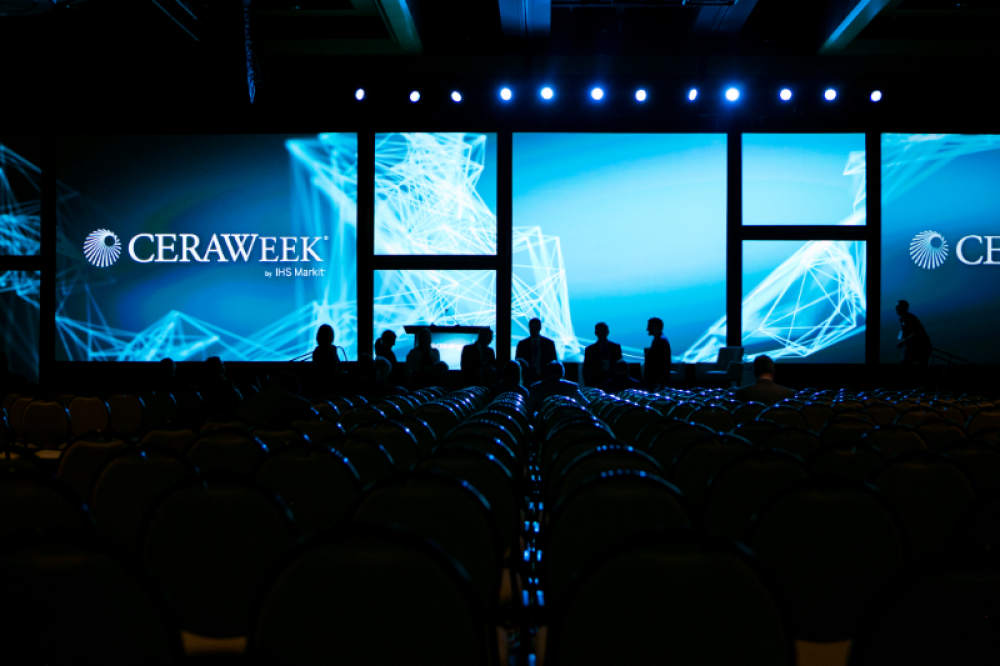 In the past, rising prices have enticed shale companies to ramp up production even after they promised prudence. That is not happening now. (Source: Image of past CERAWeek conference by IHS Markit Ltd.)

The once-brash U.S. shale industry, which spent profusely in recent years to grab market share, is now focused on preserving cash, putting it at a disadvantage to low-cost OPEC producers as the global economy begins to gear up again.

But attendees of the year’s top energy conference—CERAWeek by IHS Markit—made clear that even with a buoyant, $60/bbl oil price, shale will not come roaring back from the COVID-19 pandemic as it did from the 2016 downturn.

By contrast, OPEC and allies, known as OPEC+, has more than 7 million bbl/d of oil output sitting in reserve. This positions them to boost production much more easily than shale players for the first time in years.

The concern about free-wheeling shale companies taking advantage of OPEC’s output curbs led to a brief supply war in March 2020. Russia balked at a three-year agreement to extend production cuts, and Saudi Arabia responded by flooding the markets with oil, leading U.S. futures prices to slump to negative-$40 a barrel.

“Let’s face it. OPEC has had a very difficult time managing to accommodate the U.S. shale players and their ability to grow at low prices,” said IHS Markit analyst Raoul LeBlanc, adding that the key debate within OPEC is what oil price is just low enough to avoid a massive U.S. response.

While shale executives expressed concern about reopening the wells too quickly, OPEC nations are expected to ease supply curbs at their meeting later this week, without having to look over their shoulder at shale.

At CERAWeek, OPEC vs. shale is often discussed as a showdown between competing interests, but the dynamic of Texas vs. the Middle East is nearly invisible this year. Just one panel discussion in a five-day schedule focused on shale. Neither the Exxon Mobil or Chevron CEOs mentioned shale during their talks. Both companies have cut spending in the U.S. Permian Basin.

Crude on March 2 topped $60/bbl, up from $44.63 at the start of December, high enough to bolster U.S. producers' earnings given recent cost cuts.

In the past, rising prices have enticed shale companies to ramp up production even after they promised prudence, and $60 oil would have once prompted companies to rush drilling rigs and frack fleets back to work. That is not happening now.

“They are not taking the bait,” LeBlanc said.

Private companies are likely to increase oilfield activity, but not enough to meaningfully boost U.S. output, said LeBlanc, adding that U.S. spending is likely to remain around $60 billion, flat with 2020, as companies prioritize shareholder returns.

“The severe drop in activity in the U.S. along with the high decline rates of shale and the pressure from investment community to maintain discipline instead of growth means in my view that shale will not get back to where it was in the U.S.,” said Occidental Petroleum CEO Vicki Hollub.