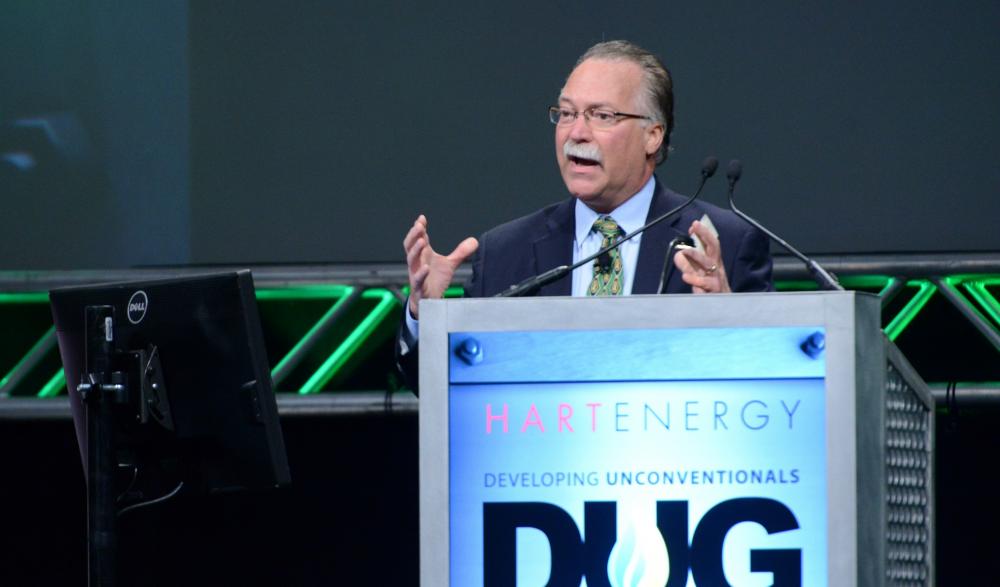 PITTSBURGH — Burket/Geneseo lives in the shadow of its big brother, the Marcellus, but the often-overlooked shale play’s production potential is not going unnoticed by all.

Gregory Wrightstone of Wrightstone Energy Consulting described the black organic rich Burket Shale, located in the Upper Devonian, as a possible future supergiant capable of producing about 30 Tcf. Sitting directly atop the Tully Limestone, less than 100 feet separate the Burket from the underlying Marcellus in West Virigina, Wrightstone said at Hart Energy’s recent DUG East conference. More than 800 feet separate the Geneseo, which partly lies in New York, from the underlying Marcellus.

“To date, there have been about 85 producing horizontal Burket wells; about 100 wells are drilled or drilling,” Wrightstone said, noting there was an explosion in permitting activity in 2014. “It’ll be interesting to see what will happen in 2015 with the downturn.”

It could be the breakout year for the Burket, he added. But it’s still too early to tell.

The Burket, he said, is still in its infancy. Plus, there is limited information, considering public production data are available for only about 30 wells.

The story is better in the Burket’s southwestern core, where he highlighted an area where production reached nearly 750 MMcfe in the first six months of production.

So why is the Burket so good in this area—Washington County?

“I think the explanation might be in that we have only 200 feet of distance between the top of the Marcellus and the base of the Burket,” he explained. “You got about 30 feet of Tully underneath it, but it’s not very well developed. And I’ll argue that it’s certainly likely that we’ve interacted with communication between the Burket and the underlying Marcellus.”

According to his presentation, most on the Burket wells in the southwest core area were drilled as stacked laterals between deeper Marcellus wells, patterns were staggered between Marcellus wells at half spacing, and zipper fracks were likely done with Marcellus wells from the same pad.

Like the Marcellus, production capabilities are driven in the Burket by reservoir quality with TOC being key factors for permeability and porosity. However, what sets the two plays apart is the lower frack boundary and their interaction with each other, particularly in the southwest core area, Wrightstone said.

So far, 19 companies have completed wells in the Burket. EQT Corp. is the leading operator, with plans to drill 40 more wells targeting the Burket in 2015, Wrightstone said.

Consol Energy is also active in the area. Wrightstone called Consol’s NV39F in the southwest play area a key well.

“Consol reported that the initial production might indicate that the well might produce 5.8 Bcfe. Actual production indicates it’s a 9 Bcfe well, about 2 Bcf per 1,000 foot of lateral, which is a stellar well,” Wrightstone said. “The two Marcellus wells underneath it were greatly impacted, and those wells had initial production rates of 9 and 10 million cubic feet.”

The production level shows evidence of interaction between the two shale plays, he said, adding the jury is still out on whether that is a benefit or detriment.

If a company chooses not to develop its Burket reserves today and complete its Marcellus wells, he asked what will happen eight or 10 years later if the company wants to complete the Burket.

“You’ll probably have a low-pressure sink underneath the Burket and possible negative interaction with the frack being drawn down into the Marcellus,” Wrightstone said. “So you may be sacrificing those reserves in the Burket if you elect to do it later.”

Though the play today is still in its infancy, there is potential.

“Possible upsides are it’s early in the play development and we can see improvement through both drilling and completion,” Wrightstone continued. “We’re going to see capex decreases through significant savings for infrastructure, and again the timing of the Burket is critical. It’s a possible supergiant in the Appalachia Basin, but it appears to be dwarfed by its big brother—the Marcellus.”